Billy Has Sex With Summer After Phyllis’ Betrayal

Friday October 5, 2018: Sharon makes a decision on her future, Mariah and Noah discuss her relationship, and Nikki and Victoria worry about Sharon and Phyllis' hatred. 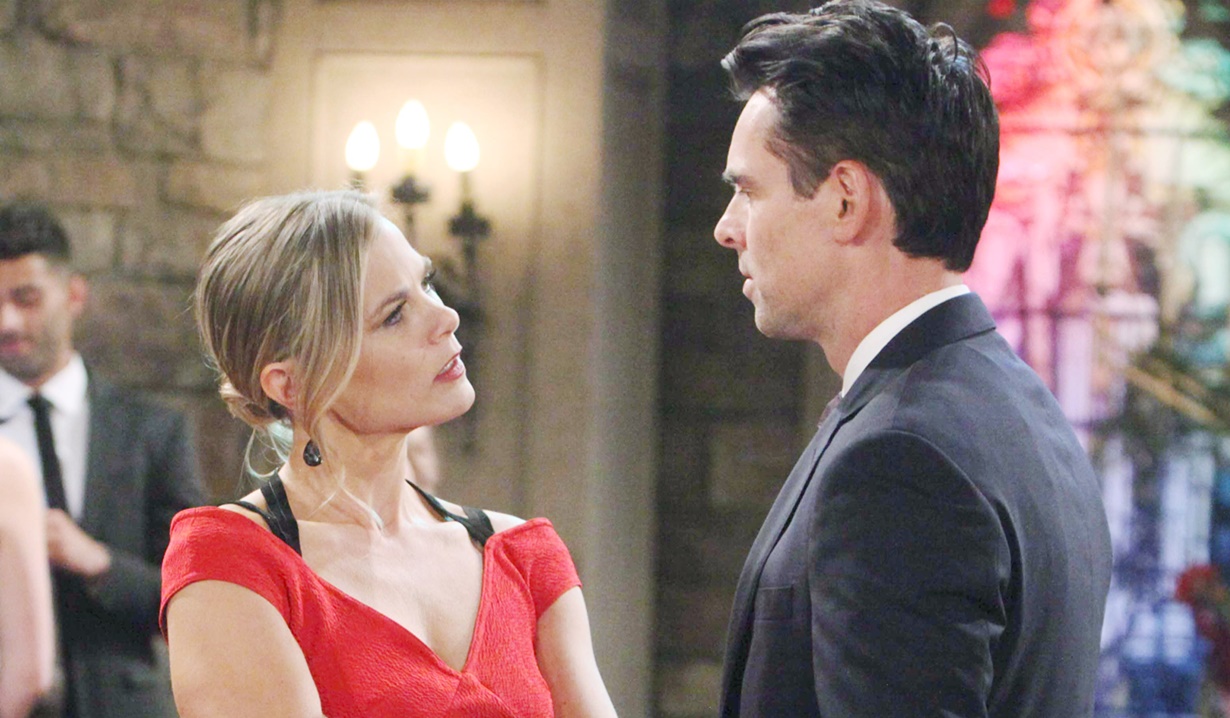 At the church, Nick apologizes to Sharon. At the back, Phyllis wants Billy to come outside. Sharon calls out – is Phyllis leaving so soon? Billy invites Phyllis to deny Sharon’s allegations. Sharon hollers that they lied and thought they’d get away with it, but they know better now! Phyllis admits it happened when she and Billy were broken up. Billy scoffs – that was two days. Sharon interjects she and Nick were only apart for a night. Billy reveals he and Phyllis were going to get married – this isn’t the only wedding that’s not going to happen. Nick reaches out for Sharon, who smacks him and snarls, “Don’t touch me!” Billy wants a crack at Nick as well, but is held back by Jack. He demands answers. Phyllis declares it was one night, and they both regretted it. Billy lunges for Nick again and the minister wants them to leave. Billy stalks out with Phyllis trailing, followed by Sharon, Nick, Mariah, and Noah. Victor makes a mocking face. Once he exits, Victoria and Nikki worry about Phyllis and Sharon turning on each other out of spite, and Vikki wonders if Nick will convince Sharon to forgive him.

At Crimson Lights, Abby tells Arturo watching her brother’s life blow up was awful. Arturo thinks Nick’s cursed. Abby argues that he and Phyllis made this happen. Arturo advises her not to be too tough on Nick – people make mistakes. Abby’s been there, but notes some mistakes can’t be taken back. They laugh about her family’s drama. Arturo isn’t sick of it and jokes, “Give me more.” Arturo decides they need to go drink tequila and hit the dance floor – he knows the perfect place.

At home, Sharon wants Nick out of her house. Mariah and Noah want them to deal with this. Noah has never been so disappointed in his father, but feels Sharon should have handled this differently. Once alone, Nick tells Sharon he’s so sorry. Sharon recalls how he did this after Cassie and figures excuses come next. Nick explains he found her ring on the desk and believed they were through – he was hurting, and Phyllis was hurting too. Sharon snaps that he should have called a friend, but he had sex with Phyllis…of all people! Nick denies carrying a torch for his ex, but admits he kissed Phyllis, which hurts Sharon more. She wails, “What is wrong with us?” She decides there should not be a ‘next time’ for them. Nick wants a chance, but Sharon angrily replies, “I said no.” She rants about the new Nick wanting everything his way. Nick apologizes. He’ll do anything to make this right. Sharon can’t be with him – she won’t put herself through it again.

At the Abbott house, Jack leaves Billy with Phyllis, who insists she regrets not telling him what happened with Nick – she didn’t want to hurt him. Billy marvels that when he hit bottom he knew he’d be okay because he had her still. Phyllis tears up, “You still do.” They embrace. Billy sighs that she’s usually smarter than this. He steps back, declares they’re done, and tells her to get out of his house and his life. Phyllis vows to fight for Billy with everything she has. After Phyllis goes, Billy tells Jack he’s getting what he deserves. Jack thinks he needs rehab more than ever. Billy agrees to go tomorrow, but has to clear his head.

More: Kate Linder’s back at Y&R

At the Club, an upset Mariah sits with Noah, who marvels at his parents’ ability to screw things up. Mariah reveals she’s the one who told Sharon. Noah assures her he’d have done the same thing. She’s grateful, and they discuss her relationship with Tessa. Noah’s over Tessa, but doesn’t want her to hurt Mariah. Mariah says she’s happy, so Noah wishes her the best. At the bar, Billy’s glad Summer came to meet him. They touch on his ‘spontaneous’ proposal, and Billy reveals he ended things with her mother. Summer wonders why he called her. Billy says she was right all along – he couldn’t give into temptation before, but now he’s free to do what he pleases. Billy wants to go back to her place – it’s her call.

Mariah and Noah arrive at Sharon’s place with Faith. Sharon tells Faith she’s ashamed of her behavior as Nick comes downstairs with his bags. Nick’s sorry that he and Christian will have to move out. Faith angrily shouts that she knew this would happen – they ruin it every time! Nick informs Sharon he’s not giving up before leaving.

Phyllis sits on a bed and sips from a bottle of alcohol. She contemplates calling Billy.

In Summer’s bedroom, she and Billy rip off their clothes and start having sex.

Sharon Dumps Nick at the Altar After...

Ashley Becomes CEO of Jabot After...

Posted 32 mins ago
Back to Top
ad