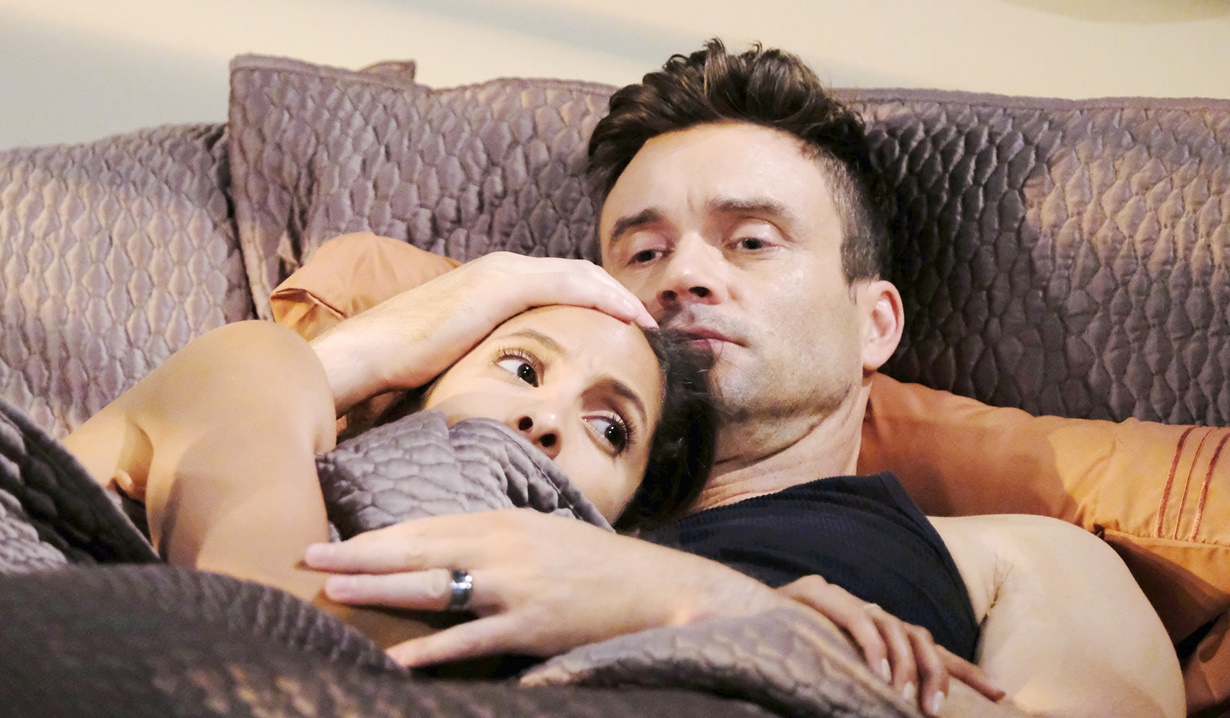 At home in bed, Lily worries about the decisions they still have to make about the house, kids, and bills. Cane reassures her with a kiss, and Lily pulls him back for another, and then they make love. After, Lily’s mind is boggled that she might not be sleeping in that bed tonight. Cane loves her and will always be by her side, so will the kids. Lily’s family and Cane give her the strength to get through whatever she has to. In the kitchen, Mattie admires Charlie’s efforts with the waffle maker. They agree they’re upset but determined to stay positive. Cane and Lily join them and Cane tries to be upbeat. Charlie announces he’s back with Shauna. Lily says that’s great; they support him. Cane nods. Lily wants happiness for her kids. Before they leave, Mattie assures Lily she’s fine. Cane tells his family, “We can do this.” Lily hangs back and looks around.

At Devon’s place, Shauna lets Nate in. He’s surprised to hear Devon left a note – he has already gone out and didn’t say what it is he went to do. Nate tells Shauna it’s okay to feel conflicted today. Shauna feels it’s all her fault for having Charlie over that day, then running off. Nate counsels that there’s no point in playing ‘what if’…all they can do is accept what they can’t change and move forward. Shauna’s scared. She observes that Hilary’s gone but Lily still has her life and her words could impact it. Nate advises her to go with her gut. Devon arrives. Shauna goes upstairs, and Nate explains that Neil got a call in the night that Sofia was admitted to the hospital – he had to go. Devon asks if Nate was trying to influence Shauna. He was just trying to support a young girl under pressure. Devon assumes he’ll try to get him to go easy on Lily. Nate sternly reminds Devon that he’s grieving, and they’re talking about his sister going to prison with psychopaths and murderers – he doesn’t want him doing something he’ll regret. After, Shauna and Nate discuss Neil leaving. Devon reappears and says, “Let’s get this over with.”

At the courthouse, Christine and Michael discuss the tragedy, but Chris hasn’t rethought her stance on the case. Michael hopes she does miserably today and is more determined than ever to make the judge see that Lily deserves mercy. Later, Nate, Devon, and Shauna are present when the Ashby family arrives. Michael greets them, then Nate updates them on Neil’s absence – he wanted more than anything to be there with Lily today. Nearby, Christine checks in with Devon and Shauna. Once everyone’s seated, Lily’s stress level increases and she closes her eyes to breathe deeply and has to be prompted to stand for the judge. The judge is there to determine sentencing and invites Christine to open. Chris holds Lily responsible for the deaths of Hilary Curtis Hamilton and the child she was carrying and wants the maximum sentence. Michael argues there are major mitigating circumstances and implores the court to show leniency – probation, community service, and $50,000 in fines. Cane speaks on his wife’s behalf. He explains to the judge that he kept it from Lily that she ran the red light, and asks him not to punish her for his mistake. The victim impact statements come next. Shauna recognizes Hilary as her mentor, role model and friend, and talks about how much it hurt when she was gone. She then acknowledges that Lily didn’t do this on purpose and she doesn’t want her friends, Charlie and Mattie, to lose their mom. Shauna cries. Devon stands. He tells the court what Hilary meant to him; he mourns her and their child. Devon understands those asking for leniency for his sister so one tragedy doesn’t lead to another, but advises the judge that Lily hated Hilary for years and was vocal about it; the responsibility for the deaths falls on her shoulders and she needs to receive the maximum penalty. Lily next expresses regret for her actions and remorse for the pain she’s caused. She has no excuses, but wishes she’d been able to accept Hilary – her resentment was a waste of precious time. Lily would do anything to have Hilary back in Devon’s arms, with their baby, and start over. She’ll do everything she can to make up for it and earn Devon’s forgiveness. The judge adjourns to make his decision. During the recess, the Ashby family and Nate gather to marvel at Devon’s statement. Charlie wonders what’s wrong with him, still asking for the maximum sentence. Cane takes Devon aside to ask if he’ll really feel better tomorrow with Lily in jail and his kids’ lives falling apart. He urges forgiveness, and reminds him he let Neil back in after he locked Hilary up on purpose. “You still have time to make this right.” The judge returns – he has reached a decision.