Friday August 31, 2018: Sharon harbors suspicions about Tessa, Nate comes to the rescue, and Cane gives Lily a night to remember. 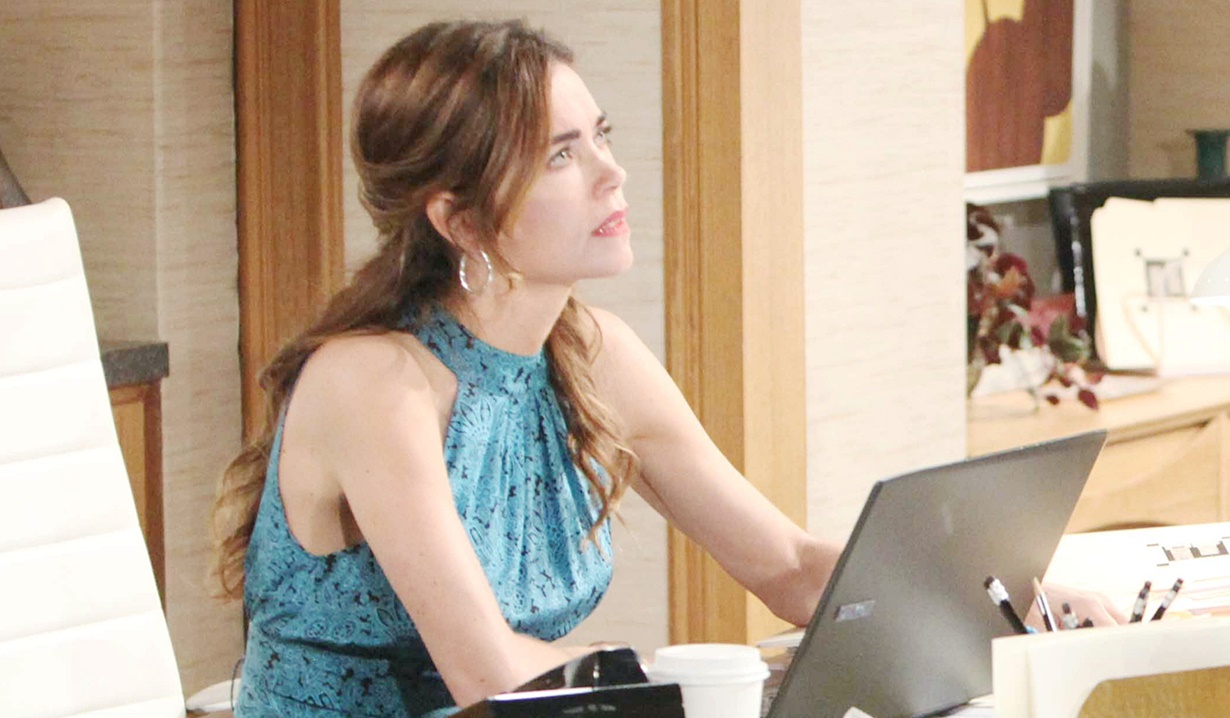 At Sharon’s place, Mariah wants to know why Tessa was just lurking and didn’t call. Sharon questions Rey about carrying a gun. He didn’t want to leave it in his hotel as there was no safe. Rey leaves, and Mariah asks Tessa what happened to her. Tessa explains she set up Crystal in a new life, and hung up on Mariah to protect her because people she didn’t trust walked in. Sharon can’t understand Tessa leaving her younger sister behind, or letting Mariah worry. Tessa assures her Crystal’s safe and says she was too intent on getting back there to contact Mariah.

At Hamilton-Winters, Michael advises Lily to answer the judge’s questions sincerely and briefly. Cane tells him they’re counting on him. Once alone, Cane reassures Lily, who asks him to give her night she can remember for the next twenty years. In the dining room, Victoria approaches Devon, who tells her he spoke to Victor – he understands forgiveness has its limits. Victoria begins, “But if we’re talking about Lily…” Devon says they are, and explains he needs justice for Hilary. Victoria can see both sides, but Devon can’t. Later, Devon spots Cane and Lily sharing a romantic dinner and smiling. Cane joins Devon to make sure he understands they’re not celebrating. Devon declines to join them when asked. Cane ask if he’ll use this against Lily in his statement. Devon plans to talk about Hilary and his child. Up at the Dive Bar, Devon encounters Michael, who hints that Lily took full responsibility so as to avoid a protracted legal battle. Devon’s presumes Michael’s going to tell him Hilary wouldn’t want him to cut himself off from the support of his family. Michael muses he didn’t think of that, but evidently Devon has. In the dining room, Lily asks Cane to make sure the kids don’t blame Devon. He just wants to enjoy the evening for now. They adjourn to the Dive Bar and talk about Paris before slow-dancing. Cane assures her they’ll come out the other side of this stronger.

At Newman Enterprises, Rey enters Victoria’s office. He’s sorry his reason for being in town made her jumpy. Victoria confronts him about wanting to get information from them. Rey’s job is to find out who used the credit card and didn’t pay it. Victoria says it had to have been JT, but Rey has a source who claims he didn’t do it. He questions why she’s not afraid to be in her office alone at night with JT out there. Victoria’s phone rings. She ignores it and offers to pay off the credit card debt so Rey can leave, but Rey also has to get answers. At home, Sharon leaves Victoria a voicemail that Rey carries a gun and could be dangerous – they should keep their distance. After, Tessa thanks Sharon for helping get Crystal out of the trafficking ring – she hopes to earn back her trust. Sharon hopes she understands why she’s wary. Mariah interrupts – she expects her mother’s support. Sharon wants her to be happy. In Victoria’s office, Rey realizes she knows more than she’s admitting since she’s eager to make this all go away. He senses she’s in over her head. Victoria smirks and dismisses him. Outside, Rey says into his phone, “I found Victoria in her office. Yeah, she bought it.” Inside, Victoria listens to Sharon’s voicemail and has a physical reaction. She phones Nate to come. When he arrives Nate helps her to breathe.

At Nate’s penthouse, he examines Victoria then explains she had a panic attack. He brings up her abusive relationship. Victoria hates that he still controls her and wonders if it will ever go away. Nate hugs her, but she pushes away and rushes to the restroom. She returns, promises to pay him, and reminds him to keep this in confidence. Victoria won’t be seeing a therapist and vows not to burden him with her problems again.

At Crimson Lights, Charlie and Mattie are discussing Shauna when she walks in. It’s not long before Shauna and Charlie decide it’s time to make up. Inside, Mariah tells Tessa that Sharon’s good at picking up on when someone’s holding back. Tessa didn’t want to get into it in front of Sharon. Mariah needs to hear every detail. Tessa confides she has to pay the people who helped her $20,000 – they know she came back to Genoa City to try and raise the cash. Mariah’s panicky but Tessa’s just grateful to be back with her.

At home, Shauna tells Devon she and Charlie got back together. Devon thinks that’s nice and is pleased he didn’t ask her what she’ll say at the hearing. Shauna worries about saying the wrong thing and letting Hilary down. Devon reassures her, and says Hilary’s is the only voice that matters tomorrow. Shauna wonders how much blame he’ll lay on Charlie’s mom.

Kyle Goes Behind Ashley's Back to...

‘Little Girl’ Review: A Trans Girl Grows Into Herself in a Lovely, Light-Filled Documentary