Thursday August 16, 2018: Phyllis gets Nick to help her deal with Summer, Devon continues to be cold to Lily, and Gloria gets a holiday. 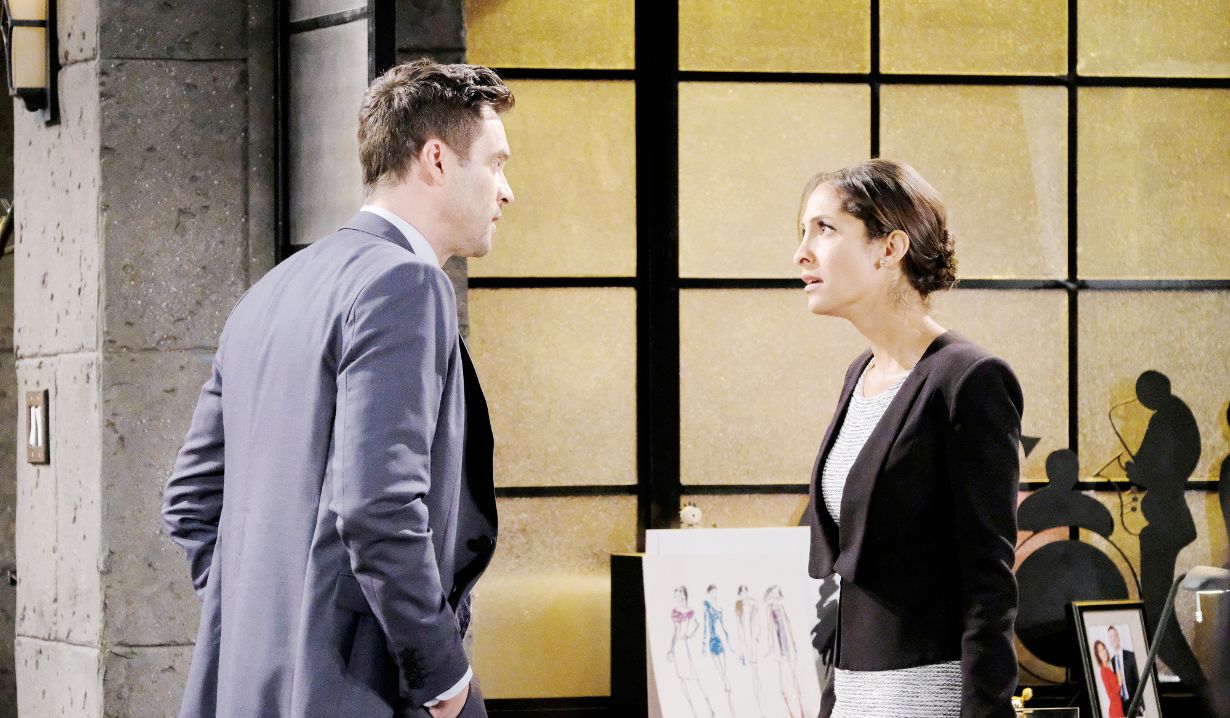 At home, Phyllis tells Summer that she has not been having an affair. Summer accuses her of acting passive-aggressive and demands the truth.

Phyllis confirms that had sex with Nick but insists it was a mistake. Her daughter lectures her for being a hypocrite and says that cheating is to her mom what gambling is to Billy. She tallies her mother’s failed relationships and blames Phyllis for screwing up her life. Summer even owes her own life to her mom being a cheat. Sitting down, Phyllis claims that she and Nick are just friends. Summer doesn’t think she can sit back and watch her mom lie to Billy. Her mom says that what would be best for Billy is her staying quiet. This only seems to infuriate Summer more and she storms off to see Billy.

Cane brings Lily lunch at the FWG office. She hasn’t been returning his messages, so he’s been worried. Lily suggests he get his head out of the sand and act like her court case is real. She suggests he find alternative representation for her clients and prepare a press release if she’s convicted. He refuses to give up hope. She gets distraught as she tells him how hard it will be for her to stop being a mom the way she has been. He holds her as she sobs. Devon walks in and Cane leaves them alone to speak. She gets Devon coffee and explains she’s trying to get everything set up in case she is sent to prison. He’s cold and doesn’t want to talk to her. As he leaves, she tells him how much she misses him. He looks back at her but leaves anyway.

Phyllis storms into Jabot with Summer trailing after her. They both demand to see Billy but Gloria tells them that he’s in meetings and can’t be disturbed. She offers priority to whoever gets her a cappuccino. Phyllis bursts into his office and sees he’s gone. Mother and daughter insist on waiting. Phyllis doesn’t understand what went wrong with their relationship. Summer’s personality changed for no apparent reason. Summer explains that leaving Genoa City for a year made her realize she needs control of her life. Her mom warns that not caring what other people think has limited long-term appeal. She’s tried to give her the best life she could. Summer is proud to have such a fierce mom but doesn’t know how to live up to her example. Phyllis pleads with her for a ‘reset’ to their relationship so they can do things right. Her daughter would like to start over but not in this context. She accuses her mom of trying to manipulate her. Gloria interrupts to say Billy texted and won’t be back any time soon. After Glo wanders out, Phyllis begs Summer to forgive her and leave this alone. Summer offers to give her blessing if she and Billy survive this. Phyllis walks out and asks Gloria to keep Summer in the office in exchange for a spa package.

Nick joins Mariah on the roof and they talk about how hard she’s been working on the wedding. He’s still worried about Summer’s lack of enthusiasm. They talk about the bridal shower she’s planning. Phyllis appears and Mariah takes off. “Summer knows,” Phyllis tells him. It takes a few seconds for him to interpret this. He doesn’t know when their daughter developed a moral compass. Something must be wrong. Phyllis suspects the bigger issue has nothing to do with them and, ridiculous as it may sound, she suspects Summer wants Billy for herself. Nick looks horrified. They try not to ponder this. He offers to try to convince their daughter to change her mind.

Nick drops by the Jabot offices to see his daughter. Gloria complains about being Summer’s secretary for the day. He thanks her for that and suggests she go home early. She’s reluctant but he offers her a spa weekend so she wishes him ‘toodle-oo’ and exits. He goes in to see his daughter and says he’s not angry that she threatened to ruin five people’s lives, but she should have come to him first. He offers to tell her his side of what happened. Nick says what happened was a massive error in judgment and they are trying to move forward. He says that she right to be furious, but he doesn’t understand why she is trying to use this. Nick insists that he needs Sharon and she is his future. Summer doesn’t buy that he has a real relationship with Sharon since he has such an ongoing spark with Phyllis. He asks her how ruining this will make Faith feel. His daughter says keeping up the charade will just make things worse. Nick says they don’t seem to have the loving and trusting relationship they used to have so he cuts her a check. She pouts.

Back at home, Phyllis sends Billy a text saying how much she misses him.

Ashley gets some support.

Sharon Asks Abby to Be a Bridesmaid...