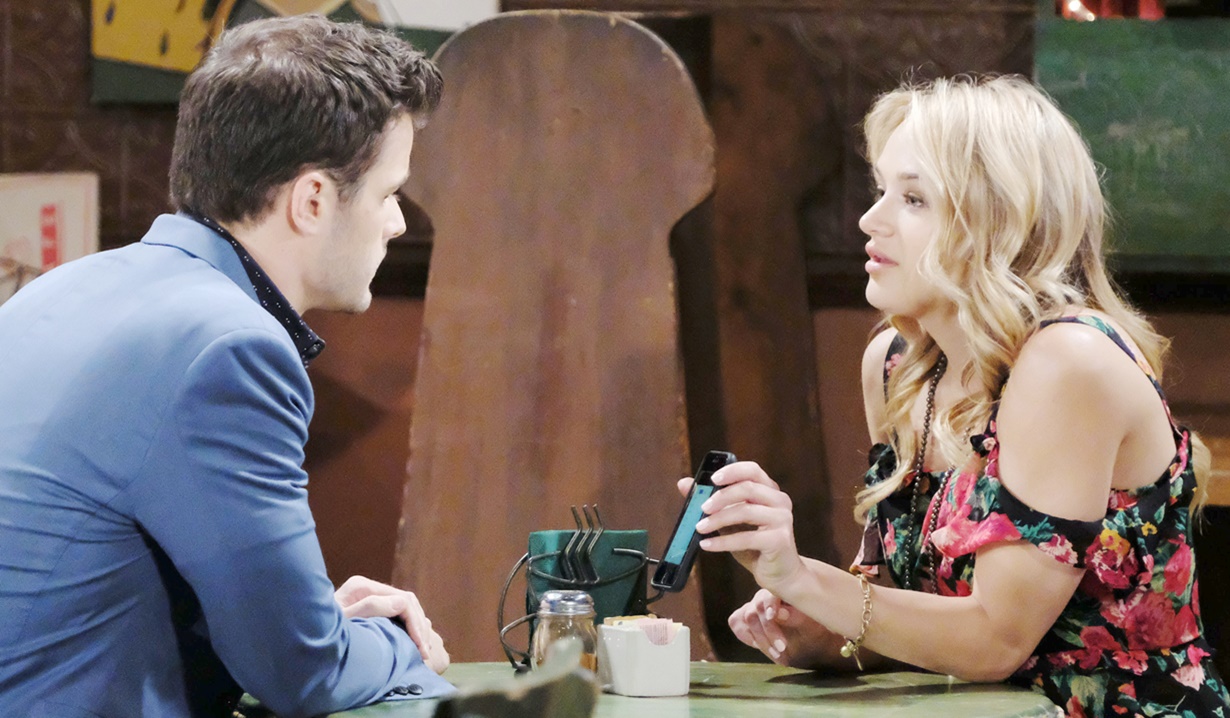 At the Dive Bar, Victoria and Nikki rehash Sharon’s gathering, before talk turns to living with what happened to JT. Nikki goes for drinks. Nate appears and re-introduces himself to Victoria. He asks her to show him around some time. Victoria doesn’t have time. Nikki reappears and reveals Nate’s her new doctor, and is over-seeing Victor’s recovery. Nate’s determined to find out what’s causing Nikki’s stress. After Nate goes, Victoria worries he’ll figure it out. Nikki assures her she can handle Dr. Hastings, though she confesses the secret has taken a toll. Victor joins them. He’s surprised to hear Victoria has doubts about Nate. She switches gears to update Victor on Reed.

He’s proud of his grandson. Vikki leaves, and Victor leads Nikki behind some curtains to reveal a surprise couples massage. After, he reveals they’ll have dinner; he wants to alleviate her stress, but is stunned to hear she’s not concerned about JT coming back. At Hamilton-Winters Group, Lily tells Cane his Australia plan is crazy and a disaster in the making. Cane protests; they have to go now. Lily retorts that the best option is facing the consequences of her actions. Cane argues; sometimes you have to put what’s best for your family first. Lily rants about the illegal plan – he could go to jail just for buying the plane tickets

– did he even think about their kids? She wonders, “Is this who you are?” Cane mentions Colin, and Lily snaps about Cane taking the advice of a criminal. She’s furious. She recalls how Cane withheld the information from her in the beginning; he’s responsible for Devon’s reaction, and now wants to make it worse. “This isn’t about you.” Lily takes off, telling him to leave her alone. In the dining room, Victoria runs into Lily and unloads about spending the day at her ex-sister-in-law’s picking out dresses so she can become her current sister-in-law again, then gets called to work. Later, Nikki and Victor discuss protecting the ones they love over dinner. They agree Dr. Hastings is taking care of them both well. Victor says her love has made him feel better. Nikki returns the sentiment.

At Crimson Lights, Summer gripes to Kyle about him conspiring against Billy with Ashley. Kyle notes whatever they’re doing, it’s not even in the same category as her trying to get her mom’s boyfriend into bed. Summer thinks he’s worried about losing the bet. Mariah arrives, sees them, and turns around, but Kyle calls her over – he loves a good threesome. Summer and Mariah spar verbally as Summer teases her about Tessa. Kyle tries to find common ground, but they bicker about Nick and Sharon and whether people can have happy endings. Summer’s all about having a good time. Mariah wants to know what she believes in. Summer replies, “I just want to win a bet.” After Mariah leaves, Kyle asks Summer to go easy on Mariah, especially about her relationship with Tessa. Talk turns back to Jabot. Kyle’s aligned with Ashley because it will get him what he wants. Summer wonder if that’s money and power. They switch gears again to Nick and Sharon. Summer talks about them nearly splitting.

Kyle asks when Nick spent the night away from the house. Summer figures out it was the night Nick opened Dark Horse. Kyle notes he showed up at Phyllis’ place the next morning. Summer exclaims, “Oh my God, my mom hooked up with my dad!” On the patio, Charlie and Mattie discuss Lily’s situation. Charlie thinks they need to get Uncle Devon to see that he’s wrong and she doesn’t deserve to be punished. Mattie reminds him Hilary and the baby are gone and their mom’s responsible. Charlie has to at least try. Mattie will stick by him, even if she doesn’t agree.

Nate arrives at the penthouse to find Charlie and Mattie ringing Devon’s doorbell. He invites them into Neil’s place and discusses their plan with them. Nate hopes Devon listens to them, but warns he’s still really angry. Nate urges the twins to never to stop fighting for justice for their mom, but to stay true to themselves.

Nate finds Victoria at Crimson Lights and questions her about Nikki’s stress. He senses Victoria’s carrying a lot of emotional baggage as well, and advises her not to hold things in. Victoria muses that maybe he’s not as smart as he thinks he is and adds, “Sticking your nose where it doesn’t belong never helps.”

Cane finds Lily fretting at the Dive Bar. She still needs space. He apologizes. Mattie and Charlie appear. Charlie assures them they can count on the two of them; they won’t do anything foolish. Cane agrees the family needs to stick together and Lily nods.

Michael sticks up for Lauren.

Cane Wants Lily to Go on the Run