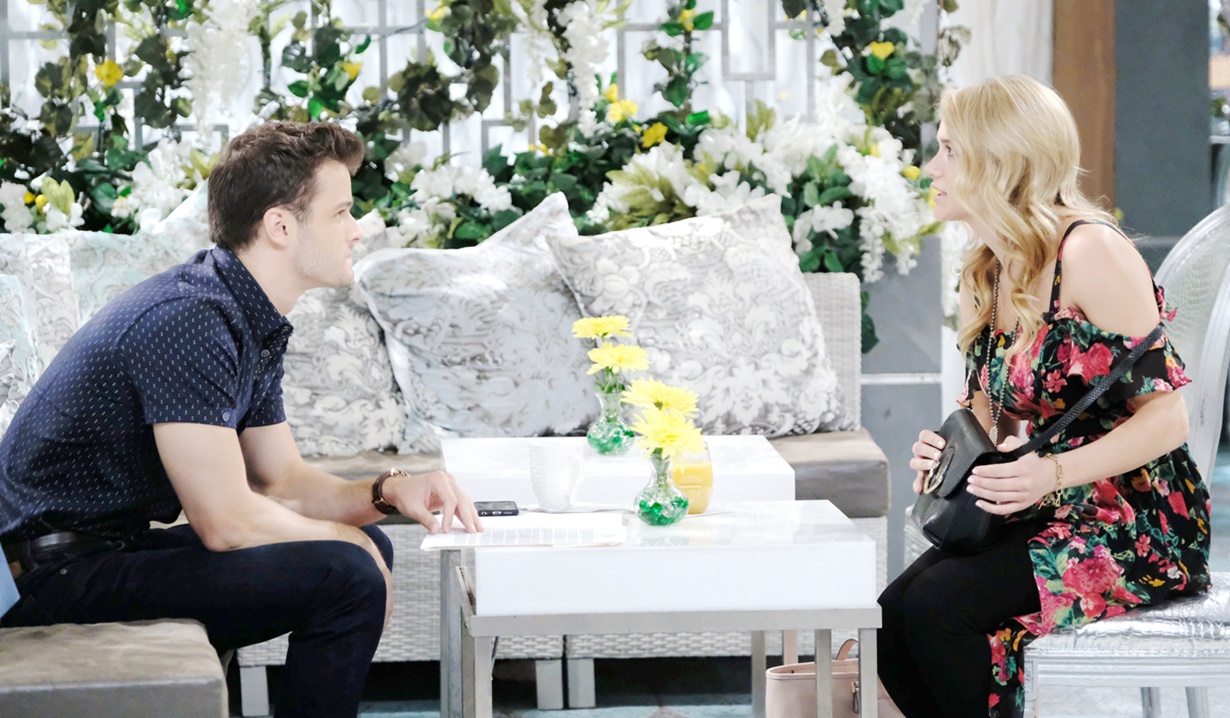 Nate arrives at Devon’s penthouse with a package that was left across the hall – it’s for Hilary. The box contains baby clothes and items. Nate ruminates on how theses things happen out of the blue after losing someone – it’s like living it all over again. Devon doesn’t ever want to forget what he and Hilary shared. He imagines Hilary shopping for these things, but Nate realizes Hilary didn’t buy them – a letter accompanying the box reveals they’re from a few of Hilary’s devoted fans.

At Hamilton-Winters Group, Cane assures Lily that the judge will see it was an accident. Lily argues her mistake cost Devon his family. Lily’s determined to spend as much time as possible with Cane, the twins, and Sam as she can in case she goes to prison. Cane exits, and gets a call. He tells caller he’ll see them soon.

At the Dive Bar, Jack updates Summer that Phyllis is definitely not interested in getting back with him. He advises her to stay out of other people’s love lives. In the dining room, Ashley and Kyle make their case to Phyllis for the new boutiques being too risky for Jabot. Ash feels Billy didn’t ask for their input because there would have been too many reasons not to do it. Ash won’t let Billy risk her family business and will do whatever it takes to stop him. Phyllis maintains the business is doing better since Billy took over. Ashley argues he’s diverted a huge amount of money from R&D and questions his creative bookkeeping. Phyllis feels that’s a serious accusation, and thinks Ash sounds jealous – she supports Billy.

Ash notes Lauren won’t be happy about that, and warns Phyllis she won’t shed any tears when she gets caught in the crossfire. Ash tells Kyle to keep an eye on Phyllis after she leaves. Kyle meets Jack at the bar and updates him on Phyllis and Ashley’s clash. Jack snarks about Phyllis backing Billy. Kyle thinks it’s insane – he and Jack should be running Jabot. He vows to make it happen. Up at the Dive Bar, Kyle bickers with Summer about Billy gambling with Jabot assets before reporting nothing happened between Phyllis and Jack. He mocks her for not seducing Billy. Summer’s undeterred. Kyle thinks she’s cold and says she’ll never get Billy into bed. Summer bets she can get him into bed by the end of the month. If Summer wins, she gets Kyle’s sports car, if Kyle wins, he gets Summer.

At Jabot, Jack apologizes to Phyllis for getting things wrong yesterday. She learns Summer told him she missed him. Phyllis says, “Oh boy…” She relays that Summer’s been filling her in on his feelings too. Jack muses, “She set us up.”

Phyllis is angry – she knows she’s with Billy. Jack admits he gave her the impression it wasn’t such a terrible idea. Phyllis tears up. “I thought you hated me.” Jack did, for a while, but underneath he didn’t stop loving her. Phyllis cares for him, but she and Billy are solid. Jack’s glad they got it straightened out before he left town. He says, “Billy better do right by you.” Phyllis is left stunned.

At Crimson Lights, Cane meets with Mattie, who relays that Charlie’s blaming himself for going over to meet Shauna. She wants the facts about her mother’s situation. Cane alludes to legal proceedings, but doesn’t want her to worry. Mattie realizes it’s serious. Cane reassures her.

Cane arrives at Devon’s penthouse and pleads with him – he couldn’t tell Mattie her mother could go to prison.

He begs him to come to the hearing and stop this. Devon plans to be there so he can tell him to give Lily the maximum sentence – she can watch her kids grow up from behind bars. Cane swings at Devon and Nate throws him to the ground. The situation is diffused but Devon stands by what he said. After Cane leaves, Nate says he would have done what Cane did – Devon’s hurt but dumping on people won’t make it better.

Mattie joins Lily at Hamilton-Winters and tells her she went online to find out what she’s facing. Lily assures her Michael is building a defense. Mattie asks if she’s scared. Lily’s ready to face the consequences. In the dining room, Jack commiserates with Cane about the terrible accident and urges him to give Devon time. Cane asks for advice. Jack tells him to do whatever it takes to protect his family. Cane phones someone and says, “I need your help.” After, Jack runs into Ashley, who wants him to use Dark Horse to buy the leasing company Jabot’s using and cancel the leases on Billy’s boutiques…to save Jabot. Jack promises to look into it.

In a hotel room, Cane pulls passports from a drawer and phones to book five one-way flights to Australia, leaving tomorrow.

Summer says, “Oh my God!” Kyle interrupts, “It was Nick.” Summer marvels, “My mom hooked up with my dad.”

Cane Wants Lily to Go on the Run