Friday August 3, 2018: Neil wants to sell GC Buzz, Phyllis reconnects with Billy, and Devon tells Lily to turn herself in. 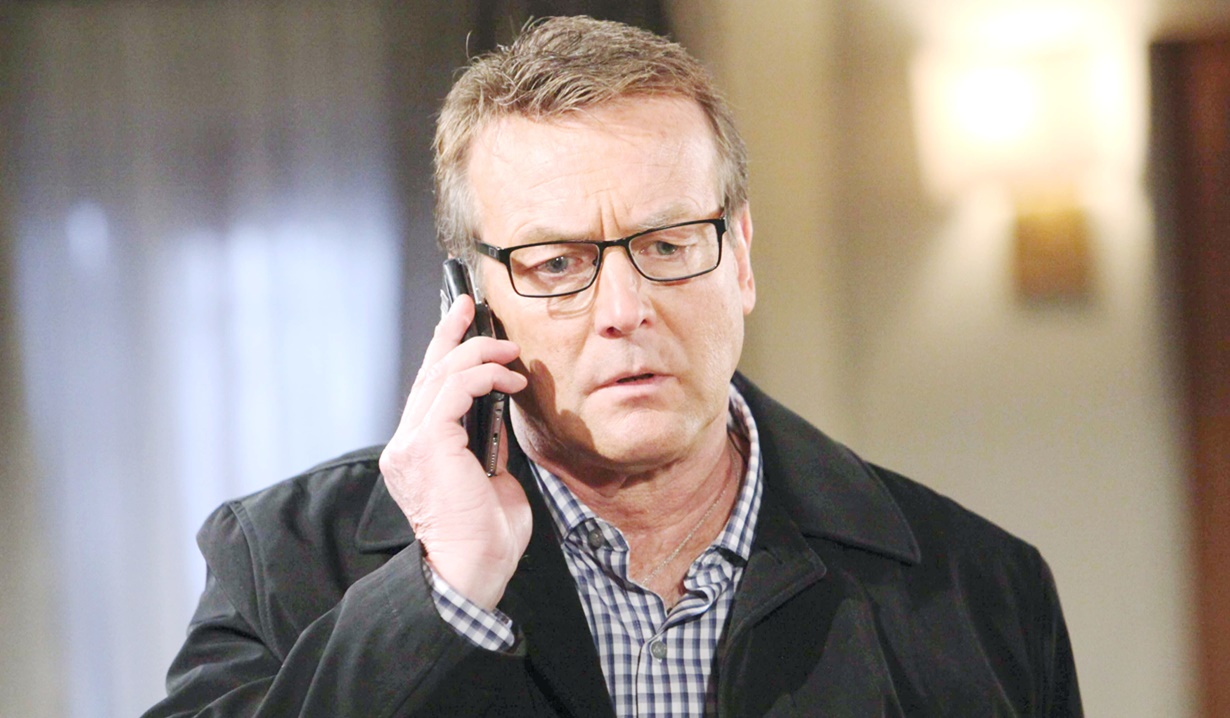 On the Crimson Lights patio, Victoria confers with Phyllis, Nikki, and Sharon about Nick impersonating JT and attacking Newman Enterprises. The consensus is that at least now they can relax and move on with their lives. Billy appears. Nikki claims they’re working on another charity project, so he leaves. Talk turns to the tension between Phyllis and Billy. Sharon hopes they find their way back together. Nikki wonders what unforgivable thing Phyllis did. Phyllis alludes to Billy’s reckless streak, which Victoria understands. Nikki still blames Phyllis.

The conversation returns to JT as Paul appears – he was just thinking of them all this morning. He mentions the JT sighting and wonders if Victoria’s seen him again. Victoria would have told Paul. Paul has a theory on what happened to JT, and Nikki realizes he suspects Victor. She snarls about Paul being more concerned with JT’s safety than his crimes. Paul insists his only goal is justice. After, Phyllis assures them that Paul’s focus will shift, though she wouldn’t mind JT’s death being pinned on Victor, and walks off. The others wonder if they should worry. Inside, Phyllis calls someone to meet at her place.

At home, Devon sits on the stairs gaping at the remnants of Hilary’s funeral reception. After, Shauna appears – she presumes Devon doesn’t want her there anymore. Devon’s taken aback, and insists he wants her to stay.

Devon opens up about his connection to Hilary, and lets Shauna know how much Hilary loved her – they’re in an exclusive club and need each other more than ever. Devon reveals her parents are fine with her staying, and tells her she was brave to tell the truth yesterday. Later, Charlie arrives to argue with Shauna about telling Devon about his mom. She reminds him his mom is all about the truth, and points out he’s allowed his parents to think they had sex. Charlie can’t do this anymore, and leaves.

At Hamilton-Winters Group, Neil tells Mariah he has to keep pushing and make the decisions Devon can’t. She tells him Tessa’s coming back, but he says that ship has sailed. Lily arrives as Mariah leaves on an errand. Neil doesn’t want Lily there, since Devon’s in a bad state of mind. Lily resists. Neil warns her to give Devon some space. Lily needs to talk to him. Neil argues what Devon needs comes first. Mariah returns, followed by Devon. Lily approaches him to talk; he’s surprised she even showed her face in the office today. Mariah pulls his sleeve, “We’re leaving. You and me, come on.”

At Crimson Lights, Devon and Mariah discuss Lily; he knows she was spouting garbage about Hilary being a mother before she ran the red light. Mariah updates him on Tessa, before pointing out that Lily will live with guilt for the rest of her life. Devon scoffs – Lily got exactly what she wanted – Hilary is gone. Mariah moves to embrace him. On the patio, Nikki, Victoria, and Sharon continue their debate about whether Phyllis is now the weak link. Sharon insists they can’t start suspecting each other. After, Nikki wishes Victoria a wonderful visit with Reed, and asks her to give him their love.

At Phyllis’ place, Nick asks, “What did our daughter do now?” Phyllis says it’s not her, it’s everything else.

She can’t talk to her usual people now – he’s the only person she trusts. Phyllis talks about Billy being a mess, and asks Nick not to egg him on. She loves him, but slept with Nick anyway; she either doesn’t love him enough or she’s a rotten person. Nick says he may be rotten too; maybe it’s inevitable he’ll screw things up with Sharon again. They agree it’s easy between them and get nervous. Nick needs to go. Phyllis thanks him for stopping by.

Mariah and Devon return to Hamilton-Winters Group where Neil focuses on business – they have to replace Tessa, and he wants to sell GC Buzz. Devon snaps. He won’t let him pretend that Hilary never existed – he says GC Buzz isn’t going anywhere and Mariah will host.

Lily approaches Devon again to apologize. He thinks she just feels sorry for herself, and confronts her about telling Hilary she’d be a terrible mother. Lily didn’t want Hilary dead and points out she could have died herself. Devon snipes, “There would have been more justice in that.” He wants Lily to turn herself in to the police. Neil protests, but Devon says if she won’t, he’ll do it for her and Shauna will back him up.

At home, Nick pulls Sharon into a hug – she is the only thing that matters, and he wants to get plans on track for the wedding.

At Jabot, Phyllis parks herself on Billy’s desk – she’s wrong, and isn’t about to lose him. She won’t hound him about gambling, but they’ll talk about it. No more ultimatums, no more days and nights apart. Billy feels he’s an idiot – he loves her and wants her back. They kiss.

Victor tells Nick he’ll never forget that he ratted him out to the Feds.

Devon Devastates Lily, Says He Has...

Lily Decides to Turn Herself in to...