Wednesday August 1, 2018: Devon holds Hilary's funeral service and reception, Phyllis reads a note from Hilary, and Mariah discovers what Mark was to Hilary. 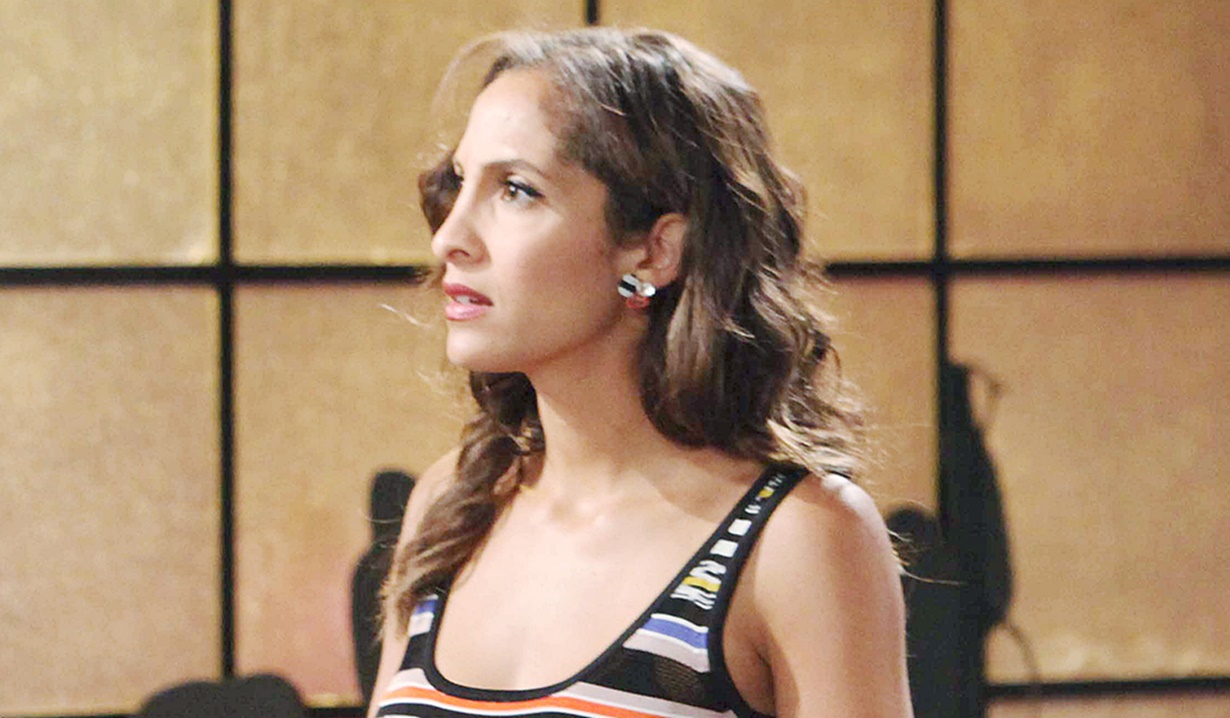 Devon is dressed for the funeral at the penthouse when Neil and Nate arrive. Nate reports Cane and Lily are next door with the kids. Devon says Shauna’s upstairs. He worries he hasn’t done enough, and becomes tense over finding his tie. When he goes upstairs, Nate reminds Neil there’s no timeline for dealing with grief. Lily arrives as Devon reappears.

They hug. Nate and Neil leave. Shauna listens in as Lily tells Devon she feels guilty about how she treated Hilary; he loved her. Devon reminds her they made peace, that’s all that counts. Across the hall, Charlie tells Cane he’s upset about hiding the truth, and asking Shauna to do it.

Jack arrives at Phyllis’ place. He offers her a ride to the chapel unless she’s expecting Billy. Phyllis doubts he’ll show.

At Jabot, Billy tells someone on the phone, “This has to happen by the end of the week.”

At Sharon’s place, Mariah’s pleased that her mother plans to join her at Hilary’s funeral for moral support.

At the church, Devon places his hand on Hilary’s casket.

At the reception in Devon’s penthouse after the service, Neil assures his son it was exactly what Hilary would have wanted. Billy is there and tells Phyllis he wouldn’t have missed it, Hilary was a friend. Devon makes a speech about Hilary; a star who shone brightly. He and Mariah smile about her stubbornness. Devon recalls their passion tore them apart – he regrets that – but Hilary persisted.

She wanted to have a child together, and he realized he’d never stopped loving his wife. Devon knows she’s making heaven a more beautiful and interesting place. They all raise a glass to Hilary. Jack speaks about being Hilary’s friend and her strongest qualities. He remembers when she talked about the perfect father for her child, and he told her she was describing Devon. He hopes she inspires all of them to get the truth out there. Shauna wants to go next. Cane and Charlie look uncomfortable as she cries that Hilary took her in; she trusted her. Charlie takes her arm, and Neil takes over. He ruminates about his complicated relationship with Hilary. He wishes he’d learned the power of forgiveness sooner.

As the reception continues, Phyllis talks about Hilary being her ‘wing-woman’ and reveals she has a note from Hilary to read. The note welcomes them all for coming, hopes they’ve laughed a little, and shed a few tears (or she’d be insulted). In her note, Hilary acknowledges Neil’s class and goodness and promises to help find him a good woman. She tells Shauna what she has in Devon and his family, and to get a great education. To Lily, she prays that she and Cane continue to appreciate how lucky they are to have their family back. Hilary pleads with Mariah to upgrade her wardrobe, take the show to new heights…and she’s happy she found someone to love. She urges Jack to put love first before business. Her final words are for her love, Devon. She thanks him for giving her a wonderful life, and orders him to take time for himself; take a break for as long as he needs, not look backward, and use their memories to launch him into the biggest life possible. She asks him to picture her holding their baby snug in her arms – happy, so happy. Mariah spots Mark, the man Hilary was with at the Club. He says he didn’t know Hilary well. Mariah tells Sharon that Hilary described them as ‘old friends’. Jack hovers around Billy and Phyllis, while Devon acts edgy toward Nate. Neil reminds him Nate gave Hilary more time. Devon feels she should have got more. Sharon and Phyllis have a whispered conversation – Sharon notes JT never got properly laid to rest. Meanwhile, Mariah corners Mark and Devon joins them. They find out he made her a job offer, but she wouldn’t walk away from Devon and raising a child with him. Billy upsets Phyllis by leaving. She tells Jack she believes he’s gambling again. The twins talk with Shauna. Mattie insists her parents will be supportive of Shauna. After, Charlie learns Shauna’s pissed off that Lily’s getting away with what she did. Charlie insists she didn’t mean to hurt anyone as

Lily approaches and offers to help Shauna through this. Shauna snaps and blurts that Lily needs to stop acting like it was an accident. Everyone, including Devon, falls silent as Shauna exclaims, “You caused it Lily. You are the one who ran that red light, and Hilary is dead because of you!”

Devon Devastates Lily, Says He Has...

At Home With Olivia Culpo: How Running & Cooking Are Helping Her Survive Being Self-Isolated

More Screen Time During Lockdown? Not for These Kids Cable Channels