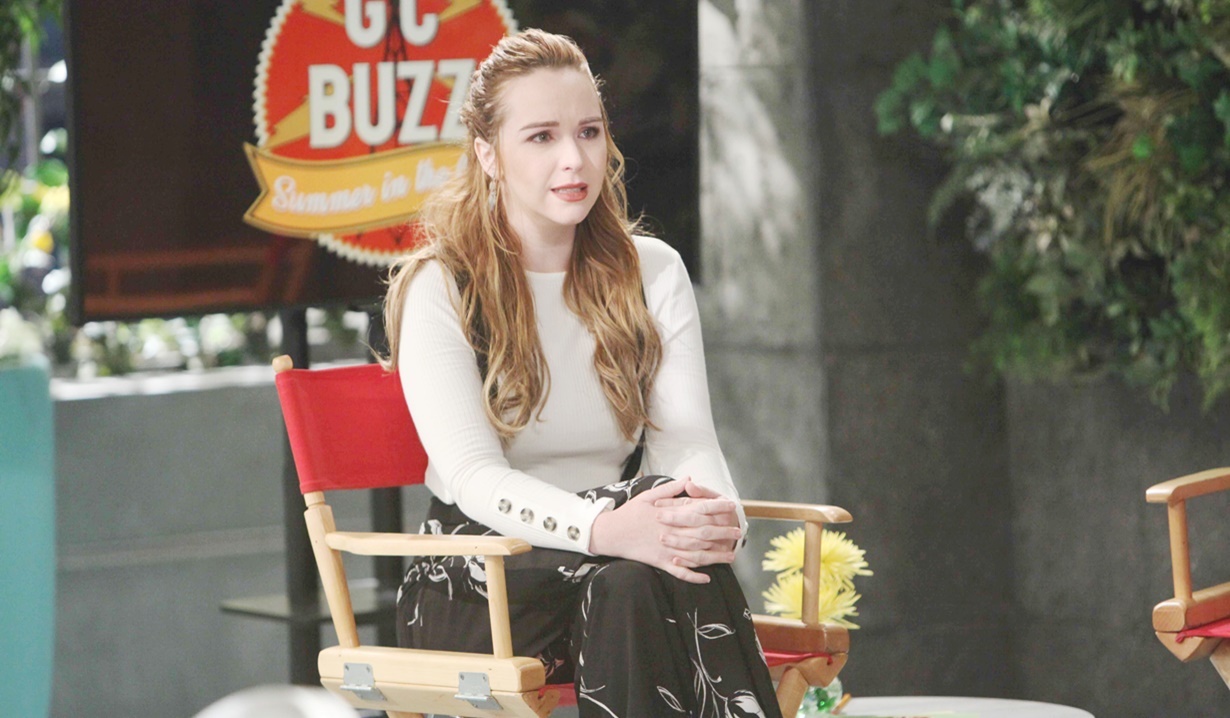 Mariah awakens at home, goes downstairs, dials her phone, then looks horrified. Sharon appears and comforts her as she cries. They discuss Hilary. Sharon wants to know what she can do. Mariah’s worried about Devon, and says Hilary wouldn’t approve of her sitting around there moping – she needs to do something huge, and very…Hilary. Nick appears, sporting a shiner, as Mariah leaves. Sharon asks if Nick’s ready to talk about Billy…and what happened to his face.

Nick downplays it. They discuss Mariah’s sadness. Nick thought Hilary could fight her way through anything. Talk turns back to the fight. Nick says Billy threw the first punch and got what he deserved – he’s on a gambling binge and needed a reality check. Sharon finds Mariah’s duffle bag and a one-way train ticket to Santa Fe. She goes to find her.

Neil arrives at Hamilton-Winters Group, finds an envelope with his name on it on the desk, reads the contents, then phones someone. He exclaims, “What?” and takes off.

Jack sits in the Club dining room, reads something on his tablet and, distressed, attempts unsuccessfully to reach someone.

Phyllis comes downstairs at home, gets out a coffee mug, uses her phone, then breaks down in tears. When Summer comes along later, looking for coffee, Phyllis snaps at her about wasting her life. Summer realizes Hilary died. Phyllis laments that it’s such a tragic loss of such a powerful life. They embrace.

At the hospital, Neil encounters a dazed and devastated Devon leaning against a wall and embraces him.

At the penthouse, Nate apologizes to Devon for letting him and Hilary down. He and Neil both want to help, but Devon doesn’t need anything. Shauna appears. Devon tells her that Hilary had a post-op complication and passed away.

He assures her this is still her home. Devon comforts the girl, then announces he has business to attend to, and abruptly leaves. Neil gets on a call with Lily, and says Devon may not be ready for condolences. Nate and Neil discuss Devon refusing to mourn. Mariah arrives. Neil says he got a resignation letter from Tessa. Mariah explains she had a last-minute opportunity, and asks Neil to let her do GC Buzz today to honor Hilary. She wants to make her proud from wherever she’s watching.

At Crimson Lights, Phyllis and Billy are both wearing shades. He asks if she’s been crying, then says, “Hilary.” Billy pulls her in for a hug and makes apologies. She grimaces over his black eye and worries he’s going down a familiar, dark path. Suddenly, Nick appears, also wearing shades.

He wants to speak to his friend alone, but Billy challenges whether his girlfriend wants that. Jack arrives and jokes it’s an ‘exes of Phyllis’ meeting. Billy leaves. Nick tells Phyllis he’s sorry about Hilary. Jack repeats the sentiment – they agree to raise a glass in her honor later. After, Nick warns Jack about bringing person vendettas to Dark Horse. Jack counters that it was born out of his vendetta against Victor. Nick wants to change it to a positive. Jack says it’s a fresh start for him too – whatever Nick needs is his.

At the Dive Bar, Mariah instructs her crew and Sharon arrives to confront her about leaving. Mariah couldn’t abandon her family – Tessa left alone. Sharon’s proud as Mariah puts on a brave face. Down at Hamilton-Winters, Devon refuses Nate and Neil’s invitation to watch Mariah’s tribute show – he has a company to run.

Nate asks about Neil’s grief. He promises to deal with it, as soon as Devon does. They tune into GC Buzz as Mariah reports Hilary’s death in a quavering voice. She looks to Hilary’s empty chair and jokes about her jabs. Nearby, Devon also watches with a pained expression as Mariah talks about Hilary’s generosity and about her marrying the man she loves. Devon cries along with Mariah, as she says Hilary would want them to keep on buzzing and signs off.

Neil holds Devon as he breaks down in sobs. In the dining room, Jack and Phyllis toast to Hilary and she admits she’s doing lousy. Talk turns to her difficulties with Billy. Jack apologizes for teasing her earlier. She promotes him to Hilary’s spot as her best friend. At the Dive Bar, Mariah’s stunned to see Tessa. She explains she changed her train ticket to roundtrip – she won’t choose between Crystal and Mariah, and will return. They embrace.

At Jabot, Billy warns Summer he doesn’t regret smacking her dad. She teases that Nick was wrong – it was her leading Billy astray – or trying to anyway. Summer feels he’s better off without her mom; now he can be impulsive. Billy’s irked that she keeps flirting. Summer theorizes that the best way to get over someone, is to get under someone else, and moves in for a kiss. He stops her – he’s not hooking up with Phyllis’ daughter. Summer presumes he’d have sex with her if she wasn’t Phyllis’ daughter. Billy points out, “But you are,” and warns her again to stop.

Abby questions Arturo about his past.