Hilary Grills Nate About Why He’s in Genoa City

Thursday July 5, 2018: Neil and Ashley worry about the latest scandal to hit Newman, Summer tags along with Billy, and Jack tries to prepare Dina to testify. 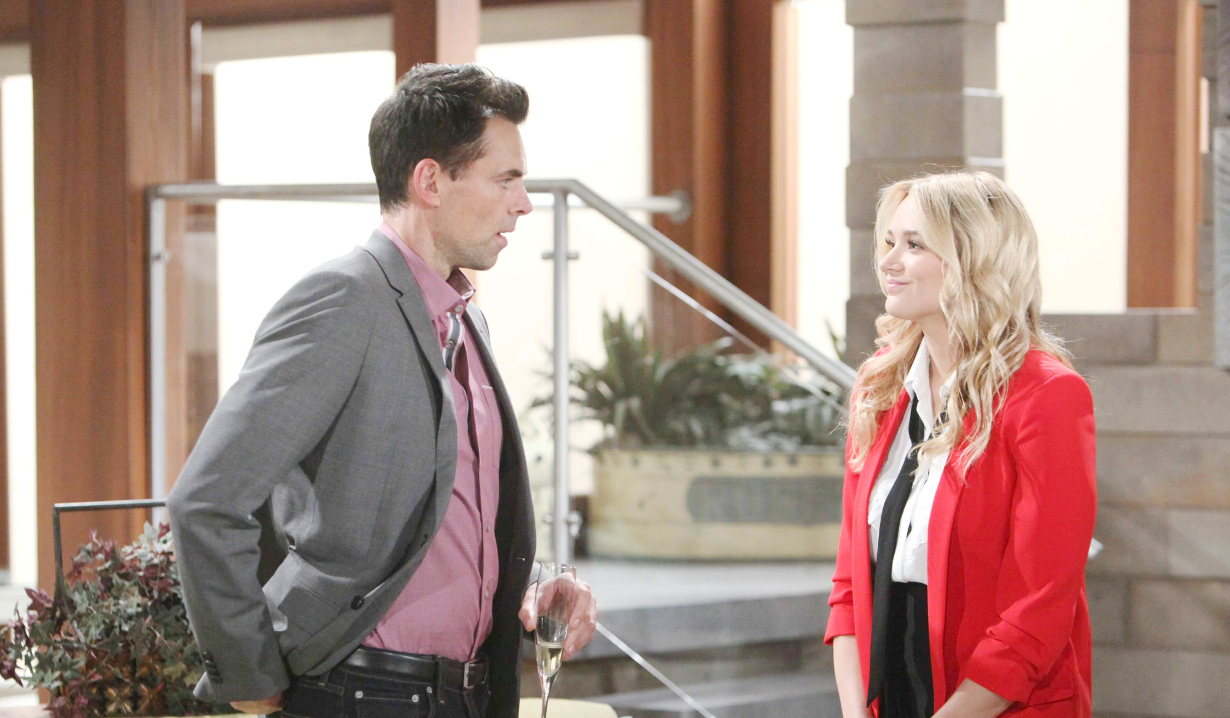 Ashley shows up at Neil’s apartment following a worried email he sent her. He warns that there is a story about to break. They check his computer and see there is a story about JT disappearing when he was investigating Victor. Neil calls Victor and suggests he read the story. When he gets off the line, Ashley says the story is hard to dismiss. They both know Victor has done a lot of ‘questionable things’. Neil thinks they can manage this. Wet Nate comes down the stairs in a tiny towel. He puts some clothes on and then catches up with Ash before she takes off. Neil and Nate discuss the company being under attack. Nate’s not sure why Neil should stick around through the scandal, but Neil says he never cuts and runs. He remembers that he’d planned a family party to welcome Nate back. Later, the family arrive, and Lily tells her dad that Cane is dealing with a lot because of Jack. She fills him in on Jack suing for answers about his paternity. Devon arrives with Shauna while Mattie grills Nate about med school. Hilary comes in late. Nate looks at her coolly and says they already met. Everyone gathers around Nate and asks him all about his career. He manages to change the topic, but Hilary changes it back. Things get uncomfortable, Hilary corners the doctor and asks him about her rash. He doubts she’s interested in his ‘rusty opinion’. They bicker. She complains about her swollen ankles. He says it’s not normal so early in a pregnancy and she probably has fat ankles. The family suggests she have Nate on GC Buzz. Devon and Hilary step aside. She doesn’t like his cousin and thinks he’s just some guy from Boston with an attitude. When she gets a chance, she corners the doctor again and grills him about why he’s on sabbatical. He tells her to stay out of his business. Shauna interrupts to stick up for Hilary, who trashes the doctor’s bad bedside manner. Nate heads upstairs and Neil stares daggers at Hilary. He wants her to leave. She thinks that the doctor is a diva and demands to know what the secrets are all about. Neil explains that the love of Nate’s life died a year ago today. Hilary laughs uncomfortably, accusing everyone of letting her act like a jerk, and leaves with Devon trailing after her. At the Abbott estate, Jack and Kyle talk about how Dina is doing. Jack wants her relaxed and focused so they can get proof that Phillip is his father. Kyle wonders if there might be a way to do this without getting Dina to testify. Jack knows it’s not ideal but doesn’t see much choice. He’s annoyed that Ashley isn’t there. She soon arrives, and Dina emerges, apparently in a good mood. They sit down, and Jack explains how they are going to play mock trial. Kyle plays a lawyer and questions his grandmother. She explains how her relationship with Phillip developed and how she loved him. They stop. Jack and his mother are moved. After Dina takes a break, she re-emerges in different clothes and a hat, disoriented and confused. She thinks that Ashley is ‘Sofia’ and worries the men are there to hurt her. Jack’s upset. He thanks her for trying to help, but he can’t put her through anymore. He’s dropping the lawsuit. Summer finds Billy watching trashy horror movies at home. She suggests they go out, but he has a meeting with clients. Summer assumes he’s lying and wants to come along to be his ‘good luck charm’. If he says no, she’ll follow him anyway. He agrees, as long as she remains a spectator.

Summer and Billy go to the gambling room at the Club. He sees his old rival, a woman named Sinead, is playing. Summer stands aside and watches while Billy plays Sinead. He goes all in. Sinead gives a little smirk before going all in and throwing her house keys into the pot. Billy drops his keys to the yacht in next. He has four of a kind and she has a straight flush. She takes the pot.

Sexy Fourth of July Fireworks in...