Thursday June 7, 2018: Jack grills Dina about his father, Sharon offers to walk away from Nick, and Michael warns Nick about the custody suit. 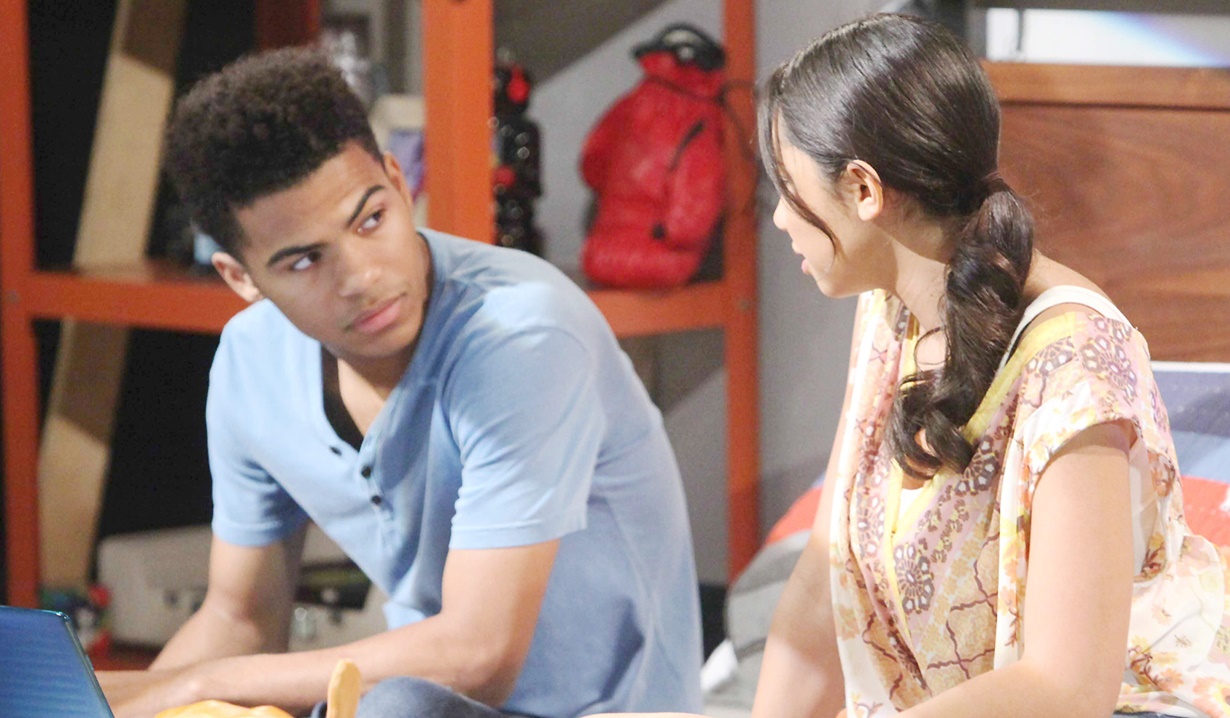 At Sharon’s house, she informs Nick she can stop Victor from using her to take Christian by taking herself out of the equation. “I have to leave you, Nick.” Nick protests, but is moved that she would offer to sacrifice everything and walk away. They continue to debate. Sharon wants to give Nick the best chance. Nick questions if he’s the best father for Christian. Sharon thinks Victor’s getting in his head. Nick decides he won’t pretend they broke up; he’s going to end this once and for all.

At the Ashby house, Lily goes in to wake up Charlie and finds Shauna in the bed. In the Abbott house, Jack signs off on a call from Traci when Dina appears gushing about her Jackie being back – the house isn’t the same without him there. Jack’s missed her too and apologizes about the angry things he said to her, but she doesn’t recall. Dina wants to head out in his convertible for a fun day.

At Hamilton-Winters Group, Mattie has corrected some of Neil’s typos. Charlie chuckles about her perfectionism, but has some suggestions for the website. Neil’s impressed. Just then, Lily marches in with Shauna with questions about finding her in Charlie’s bed. Charlie and Lily clash over him lying. He protests when Lily wants to call Shauna’s parents. Neil calls for calm. Lily refuses. Cane appears. Charlie hollers as the teens insist they didn’t have sex. Neil orders everyone to talk calmly…and to listen. Up at the Dive Bar, Jack situates Dina, who recalls her days of turning heads. Jack asks her about John not being his real father. She feels guilty about lying all these years. When asked, Dina reveals she looked elsewhere for excitement, but insists it wasn’t tawdry. Jack asks, “Who is my real father?” Dina goes on about him being handsome, the afternoons they spent together, and their magical interludes at the Stardust Inn. Neil interrupts as Jack asks his name. After, Dina can’t remember her lover’s name and becomes flustered at Jack’s questions. She reveals they were going to run away together, but he thought it was best she stay with John. Dina assures Jack he was born of love. Down in the dining room, Nick asks Nikki if she knows Victor’s planning to use Sharon to win the custody case. Nikki’s on her son’s side, but can’t deny the facts about Sharon. Nick’s frustrated she always believes the worst about Sharon. Nikki warns if he wants to win this battle he’ll have to start thinking like a Newman. They argue heatedly about Victor’s crap. Nick warns if Victor goes through with this and trashes Sharon, he’ll find out how much of a Newman Nick is. At HWG, Shauna’s story has come out and Lily and Cane announce they’ll find a solution that suits everyone. Cane takes Charlie aside to confirm he’s not sexually active, and Mattie tells Lily he was only trying to help Shauna, who doesn’t have anyone. The family agrees they should help and talk to Shauna about the unacceptable situation at her aunt’s. Hilary arrives, gets up to speed, and reassures Shauna. Lily and Cane decide Shauna can stay in Mattie’s room, but Hilary feels it’s better she move in with her and Devon. At the Club bar, Nick updates Jack on his troubles with Victor. Talk turns to the tough situation with Dina. Jack opens up about needing the blanks filled in and can’t believe Nick hasn’t heard that he’s not John’s biological son. Nick’s stunned. Jack knows nothing about his father, only that they share DNA, but notes his real father is the one he shared life experiences with. Nick nods.

At home, Nick calls out for Sharon. The doorbell rings – it’s Michael Baldwin. Victor doesn’t know he’s there. They debate about the case. Michael was hired to win by any means necessary, and tells Nick he can spare Sharon humiliation by agreeing to private arbitration – the ruling will be fair and binding. Michael walks out, asking Nick to think about it. Later, Sharon appears. She learns Nikki was as unreasonable as Victor. Sharon doesn’t want to be the reason he loses his son. Nick says Brittany agreed they should do arbitration; they start next week – he’s not giving up either one of them.

At the Abbott house, Dina asks Jack to remember for the both of them when she cannot anymore. He promises. She hopes one day she’ll recall his father’s name.

Sharon Threatens to Send Nikki to...