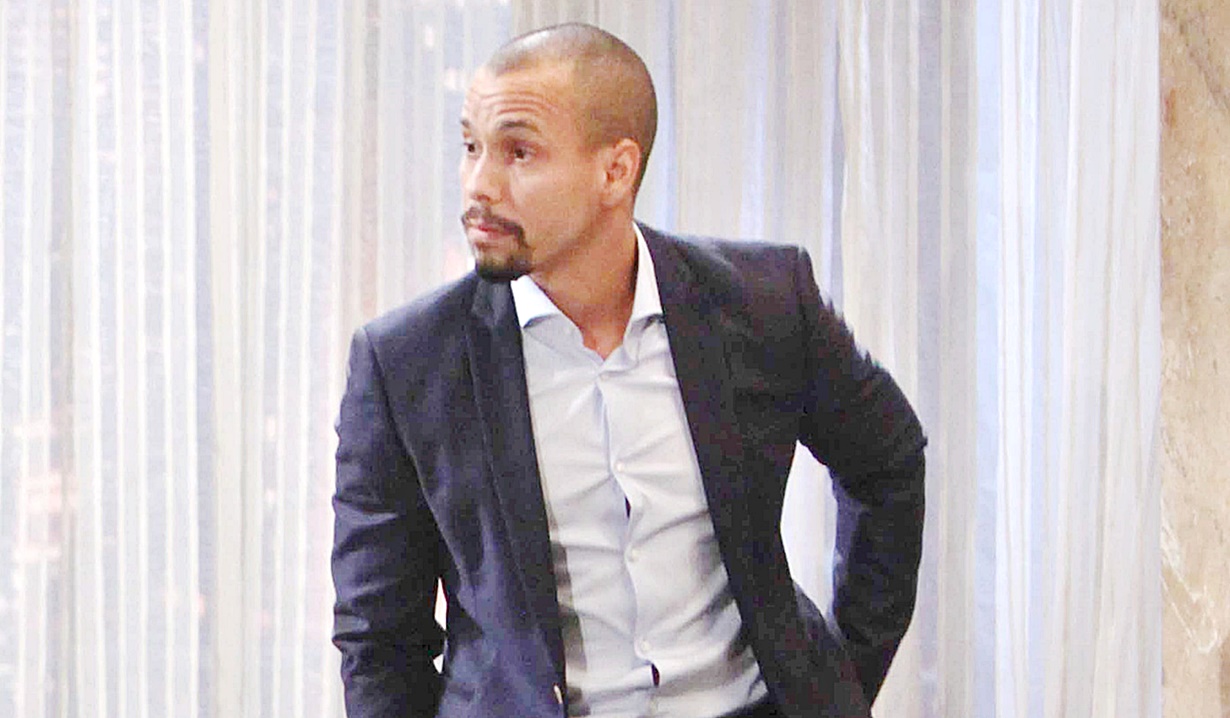 At Sharon’s place, Nick tells her Victor hired Michael Baldwin, so they also need to find a shark. Mariah appears and can’t believe any judge would prioritize a grandfather’s rights over a father’s, and wonders why he’s not suing for custody of Faith. Nick explains Christian is Adam’s.

At home, Billy hollers to Phyllis they’ll be late for the bond hearing. Phyllis appears – she’s not going and wants Summer to stew in jail for a while. She leaves Nick a message to call, before discussing Summer’s arrest – Phyllis can’t believe it of her Supergirl. Billy suggests Phyllis get the facts. She agrees.

In the jail, Summer yammers to the guard that this is all a misunderstanding; she didn’t steal the car, she borrowed it from her boyfriend…well, technically he’s not her boyfriend.

At Hamilton-Winters Group, Neil compliments Devon on pulling in younger viewers and showing good judgement. In the dining room, Jack takes a call from Gloria, who says Neil got the penthouse. Jack wants her to contact Farrah. Upstairs at HWG, Farrah congratulates Neil on landing the penthouse with his all-cash offer. Later, Jack finds Farrah at the rooftop bar wonders what happened to their deal. She enjoyed their evening, however her night didn’t end there. She flashes to running into Neil, who put in a new, higher bid, and assures Jack it’s not personal.

At Devon’s penthouse, Hilary directs a move with boxes. Devon arrives and welcomes her home. They toast with orange juice to his new roomie. Hil observes he’ll soon have two new roommates. Devon toasts again – to Hilary, their child, and their future. Across the hall, Neil arrives and realizes boxes are being moved in next door. Hilary accepts them and says, “Howdy neighbor.” Neil enters Devon’s suite, and Hil leaves. Devon relays he didn’t tell Neil about his decision, because he didn’t want a lecture. He wants them to experience the pregnancy together. Neil feels Hilary’s looking for more. Later, Neil welcomes a congratulatory Jack into his new digs. He hopes Adam’s ghost haunts him. Neil relays the news about Hilary, who’s scarier than any ghost. Jack shoots him a chastising look. Neil asks if Jack’s okay, and he admits to Neil that he’s having a difficult time moving forward.

Phyllis and Billy arrive at Crimson Lights with Summer. Phyllis wants an explanation about the car. Summer shrugs that it was a gift from an ex-boyfriend. Phyllis is irked. As Summer gets coffee, Billy counsels Phyllis to ease up.

At home, Phyllis is ready for a proper explanation from Summer and warns her how disappointed Nick will be. Phyllis calls him and relays that Summer was arrested.

At Sharon’s place, Mariah tells Sharon she was at the party when Summer was arrested. Nick disconnects and announces he’s heading to Phyllis’ – there must be an explanation. Mariah warns Nick Summer may actually be guilty of stealing the car.

Nick arrives at Phyllis’ place with Sharon. He hugs Summer but wants to know what the hell is going on. Summer tells the tale of the ‘clingy’ Pax, who wouldn’t let her go, so she threatened to go to his wife. They all glare, which Summer finds hypocritical. She continues that Pax gave her the car likely to keep her quiet, but she figures the wife found out and called the cops. Phyllis sniffs about her cheating with a married man. Summer asks how many married men she’s been with, then points fingers at the others as well. Once alone, Nick learns Summer thinks it’s a bad idea for him to reunite with Sharon. Summer further reveals she’s discovered she is her mother’s daughter…at least before she lost her edge. Later, Billy advises Summer to tone it down and think before she acts. Summer isn’t buying Billy’s maturity bit, and compliments him on the marketing scheme with Kyle. After, Phyllis ruminates to Billy about Summer calling her square. Billy thinks she’s gorgeous, whip-smart, and sexy. Summer appears and suggests they take it upstairs.

At the Dive Bar, Hilary complains to Mariah about Neil moving in across from her and Devon. She’s afraid his family will mess things up.

At home, Nick informs Sharon that Summer will be modeling herself after the old Phyllis. Sharon exclaims. Nick further reports that he hired Brittany Hodges to represent him against Victor – there’s a chance she could win. Nick realizes will drag everyone into the mud. Sharon deduces Brittany thinks Victor will use her past against Nick. “As long as we’re together, you don’t have a prayer of winning this case, do you?”

Hilary returns to the penthouse, and is agreeable, but slightly put out to be offered the guest bedroom.

Jack questions Dina about her past.