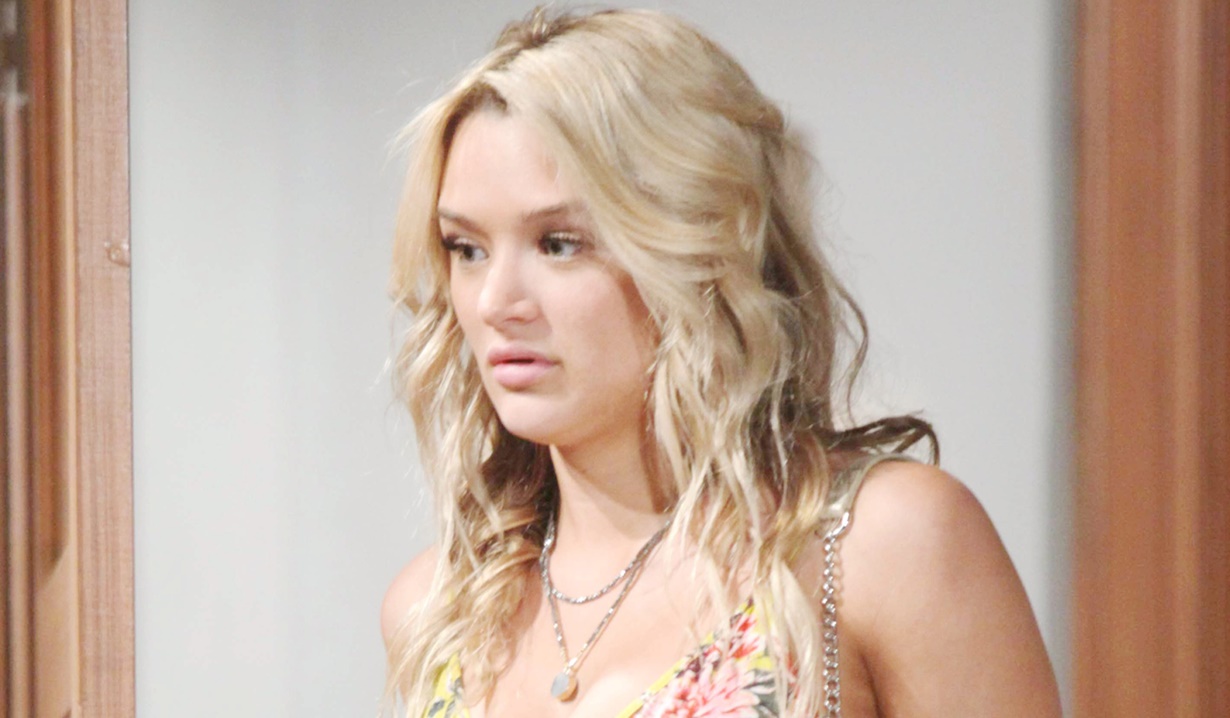 At home, Phyllis snaps at Summer that they weren’t expecting her, before welcoming her home. Once everyone’s dressed, Phyllis wonders why Summer hasn’t returned her calls or texts. Summer reveals she came from Atlanta and announces she’s going out. Billy carts in Summer’s luggage and remarks on her expensive sports car. Summer’s impressed to hear Billy’s helming Jabot.

At Sharon’s place, she and Nick speculate what Victor said to Nikki about them moving. Sharon agrees to the move after Nick says he loves her, and wants to build a life with her and the kids. They worry about telling Faith and decide they’ll focus on the positive. Nick feels Victor wanted to make him like Adam, but that won’t happen – he won’t control him or his kids. Nick gets a text from Phyllis to come over for a surprise.

At Crimson Lights, Kyle teases Mariah – she’s hanging out with an Internet sensation. Mariah muses that some are saying the wardrobe malfunciton was planned. Kyle whispers, “That would be marketing genius.” Tessa appears to invite them to Devon’s Hot Summer Nights event at the Dive Bar. Mariah has to work early in the morning. After Tessa leaves, Kyle chastises Mariah for blowing Tessa off. He advises that Tessa’s into her, and offers be her wingman. He promises they’ll have a good time.

At the Club, Arturo learns Abby knows about him hooking up with her stepmother. Arturo’s surprised Nikki told her, but counters that they didn’t really have a relationship, and it’s over. Abby observes she and Nikki share the Newman last name. Arturo is offended – her last name is the least interesting thing about her. He invites her to find him at tonight’s event if she’s the woman he thought she was.

Dancing is underway at the Dive Bar when Arturo arrives and chats with Tessa. Mariah and Kyle arrive next. A nervous Mariah tries to leave, but he stops her by saying she needs to see all she has in Genoa City after the news she got. Tessa learns that Sharon and Nick are moving away, and knows it hurts Mariah. Mariah shrugs if Victor was her old man she’d want to move too. Kyle suggests she take in a talented good-looking roommate after they leave. Mariah didn’t know he wanted to leave the Abbott house. Suddenly they hear Summer in the DJ booth. Mariah grimaces that she needs to go back where she came from, while Kyle and Summer exchange a tense look. She approaches and hugs him, but he tersely excuses himself. At the bar, Kyle tells Mariah he didn’t feel like being part of the floor show. After, Kyle informs Summer he’s over her. Mariah chimes in, “No one even noticed you were gone, Snowflake.” Summer chuckles at the idea of them as a couple, so they start dancing. Tessa watches, then eyeballs Summer. Later, Tessa dishes with Mariah about Summer asking for special consideration for her Italian sports car. Mariah calls her a rich, entitled, spoiled brat. They watch as Summer flirts with Arturo. When he says the person he’s meeting hasn’t shown, she pulls him onto the dance floor, then watches Kyle for a reaction, but he’s focused on Mariah. Abby arrives and glares daggers as she spots Arturo and Summer. She goes over and offers congrats – he’s hit the Newman trifecta – then douses him in ice water. After, Kyle needles Summer, while Mariah tells Tessa this party’s got it all. A police officer inquires about the driver of the sports car, then places Summer under arrest for felony auto theft.

Nick and Sharon arrive at Phyllis’ place and learn Summer showed up, then went out all dressed up. Nick’s glad she’s back. He and Sharon divulge that they’re moving to San Diego. Phyllis declares that can’t happen – Summer just came home. Nick shares that the Newman job is gone – Victor knows about Christian’s paternity. He’s freeing everyone from him father’s grip. Phyllis complains Summer was vague about where she’s been and what she’s been doing. Sharon notes she’s an adult. Phyllis takes Sharon to the kitchen. Billy admires Nick for taking his family away from Victor, and warns Summer has changed – she’s more…confident. Meanwhile, Phyllis tells Sharon not to get any stupid ideas about spilling the beans to Nick about the pact. Once alone, Billy and Phyllis debate about Nick’s reasons for moving. Billy thinks she’s freaking out because she’s going to have to say goodbye to her freedom now that Summer’s back. Phyllis admits it threw her. They head to the bedroom.

At home, Nick wonders to Sharon why Phyllis took issue with them moving. Sharon thinks she expects him to be there for Summer. Nick returns to complaining about Victor. They reassure themselves they’ll be happy in California. The doorbell rings – it’s Victor, who serves Nick with an injunction preventing Nick from taking Christian out of state – he’s suing him for full custody of his grandson.