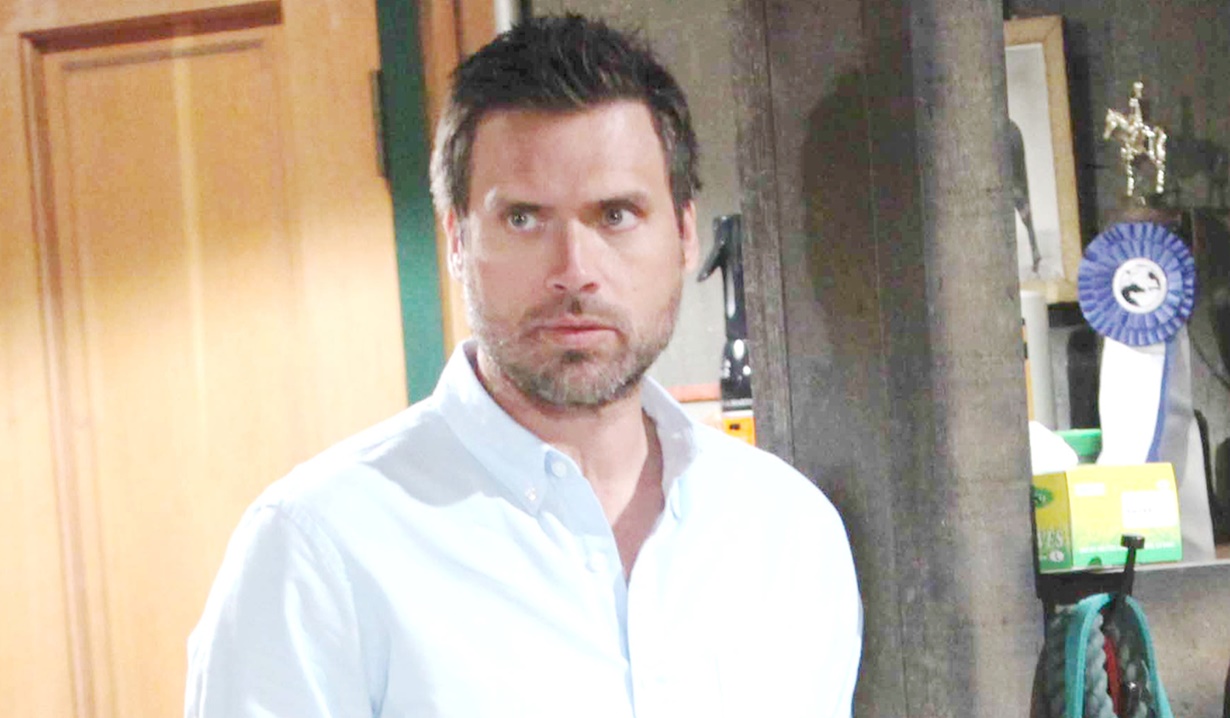 At home, Sharon and Nick happily inform Faith that they’re back together. She’s not pleased and notes it’s the zillionth time they’ve reconciled. She feels they don’t work as a couple and should be just friends. Her parents are glad she was honest, and sorry for what they’ve put her through, but believe this time could be different. Faith is encouraged to hear Nick reconciled with Victor, and agrees to give this a chance.

At the Abbott mansion, Jack confronts Kyle for betraying him, but Kyle counters that he assumed he’d go along with his plan – that’s on Jack.

At the ranch, Nikki worries Victor’s pushing himself, but he wants to attend the Memorial Day barbecue to support Neil and be with his beautiful wife. They canoodle.

At the Dive Bar, Neil is set for the Memorial Day barbecue, but Devon advises they have a big problem and may need to call it off. Both get on their phones. Hilary arrives and they inform her the catering staff canceled due to the flu. Hilary has a solution. Nearby, Kyle is greeted by Victoria. They discuss Billy replacing Jack as CEO – she’s surprised Jack would give it up. Kyle tells her if she’s going to keep digging for dirt, she’ll have to join him in the pool. Meanwhile, Tessa and Mariah arrive at Hilary’s behest and are asked to cook…for the good of the company. Mariah insists Hilary pitch in. She agrees. Devon comments, and Hilary lets him know he’s helping too. Once behind the grill, Hilary learns the RSVPs have doubled as Mariah posted on social media that Hilary would pose for photos while cooking. By the bar, Kyle hits on Tessa and gets shot down – she should date a friend of Mariah’s. He looks thoughtful. Mattie ogles Kyle’s shirtless body and Lily pulls her away. They ask why Hilary and Devon are grilling, then Lily watches as Hilary smiles over Charlie’s prom photos. Lily makes a remark and Hilary flips a burger, which lands on Lily. After, Kyle has words with Charlie over the movie, then is accosted again by Jack. Kyle says he isn’t ready to get involved in a start-up, but Jack thinks he’s being influenced by Victor, who appears just then. He tells Jack he has no one to blame but himself, no matter who his father is. Neil intervenes. By the entrance, Nikki and Victoria meet up with Nick, Sharon and the kids. Nick says he has news. Nikki sneers, “Dear God, don’t tell us that she’s…” Neil interrupts for a Memorial Day speech onstage. When he’s done, Mariah tells Tessa she’ll cheer her on when she sings…they make nice over the stolen lyrics as Sharon watches. At the grill, Kyle approaches Hilary, who wants to know if Jack’s okay. Kyle assures her he’s not. On the couches, Nick shares his decision to return to Newman with his family. Victor’s chuffed, and takes Neil’s mic to say drinks are on him – he’s celebrating the return of his son to the company. Kyle looks concerned and glances at Jack as Victor toasts to fathers and sons. As the party continues, Devon flirts with Hilary, and Mariah checks in with Faith about Nick and Sharon. She counsels that love is always a risk, but if you want to be with someone you have to go for it. After, Sharon asks Mariah about Tessa. The redhead is just trying to get past…the past. Nearby, Shauna arrives. Lily and Charlie stand by as Hilary asks her about prom. Lily rejoins Neil to warn Hilary has her hooks in Devon again. She approaches Hil and surprises her by saying, “You’d better treat him right this time.” Across the way, Mattie asks Victoria, who’s sitting with Nikki and Sharon, about JT – she really feels sorry for Reed. Once Mattie goes, the women hope to go on with normal lives. Charlie lets Shauna know she’s smart and pretty. He enjoyed her prom, but didn’t get a chance to do this…he kisses her. Holding hands, they agree to go get something to eat. Down at the Club bar, Kyle updates Victor that Jack left Jabot but he declined to join him. Kyle asks if there’s still a future for him at Newman, since Nick’s returned. Vic tells Kyle he made a wise decision staying at Jabot.

Back at the Dive Bar, as Tessa sings, Kyle reveals to Mariah that Tessa said she’s the reason she won’t go out with him. Mariah says it’s not because she has a crush on him – it’s because she had a crush on Tessa. Kyle muses that must have been hot. Mariah advises it was one-sided, but Kyle notes how Tessa looks at Mariah and thinks she’s into her. Elsewhere, Hilary and Devon hope they’ll have a little one this time next year, while Jack updates Nikki and Victoria that John is not his father. By the door, Victor revises a press releases and Nick learns he’ll be COO instead of Victoria, who went a different direction.

Victoria has an interruption in her work day.