Friday May 25, 2018: Devon surprises Hilary, Arturo accepts an invitation, and Lily sees Charlie off to prom. 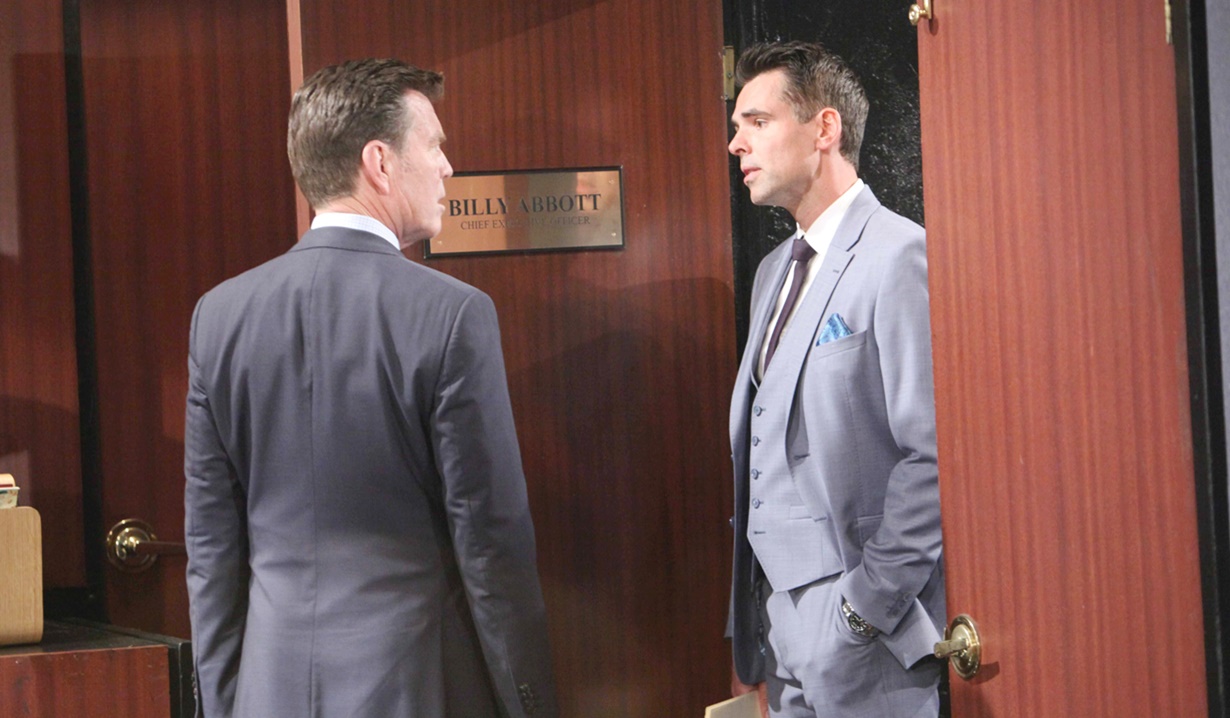 At Jabot, Jack grimaces as Billy hands out popcorn to the employees while welcoming them to a new era. He mutters about making it the shortest era in history. Later, Billy tries a scent on a blindfolded Phyllis – it’s not nice, and Billy reveals it’s the classic scent John developed decades ago – he wants to get rid of it. Elsewhere, Jack grumbles to Kyle, who urges him to go talk to Billy about his concerns. Jack goes to do so, and Phyllis convenes with Kyle. She hopes he sees Billy taking over as a fresh start, but warns him against continuing to manipulate or spy for Victor. Kyle makes a point of calling her Billy’s girlfriend, and she tells him if he wants to bring up nepotism to go look in the mirror. In Billy’s office, Jack becomes furious about him wanting to discontinue John’s scent. Billy produces a memo proving Jack had the same idea last year. Jack says if John were here he’d make all kinds of changes, and adds, “I know just where he’d start!” After, Phyllis counsels Billy that Jack leads with his heart, not his head. She supports his proposed change, and thinks the Abbotts will be thrilled if he increases profit. They canoodle.

At the Club, Abby complains to Devon that she booked a beach vacation in Miami and has no one to go with. Devon has to stick around for the Hamilton-Winters Memorial Day barbecue. Up at HWG, Lily can’t wait to see Charlie in his tux for prom, and will be embarrassing him for two since Cane’s out of town. Devon appears and Lily shows him something on her phone concerning Hilary. After, Abby arrives, and Lily reports that Hilary is trending, but not in a way she likes. Abby asks Lily about Miami, but she’s busy with the barbecue and prom. They dish about promposals, and Abby confides in Lily about Arturo. Lily suggests she invite him to go to Miami with her.

Abby wonders if he’d expect sex. Downstairs, she runs into Arturo, who concedes she was right about the suit. She teases him about his excuse for not taking her to the New Hope dinner as his plus-one. He admits he’d have had a better time with her. Abby brings up the Miami trip. Arturo does have family in Miami and considers it. At HWG, Lily gets emotional seeing Charlie in his tuxedo and reveals Devon got them a limo since they’ll be on The Hilary Hour. Charlie realizes he’s forgotten Shauna’s corsage at home. Mattie arrives with it.

At GC Buzz, Hilary surprises Shauna with a selection of gowns for the prom – it’s a celebration and a chance to get to know a cute boy. Shauna wonders why Hilary feels she deserves this. Devon watches as Hilary explains it would take too long to list all the reasons. While Shauna’s getting her make-up done, Devon emerges and tells Hilary she seems like a proud mom. Hilary muses she’s getting to relive all of this through Shauna. Devon leaves, and returns to find Hilary trying on a gown. He admires it, and teases her about the news alert earlier – she wasn’t prom queen. Hilary shrugs that she should have been – she worked tirelessly to make the prom happen but the students turned on her because a rich girl revealed she got her dress from a thrift store. Devon feels she’s turning something hurtful into something positive for Shauna. “There’s only one queen in this story and I’m looking right at her.” Devon gifts her with a tiara – she deserves some magic in her life. Devon puts it on her head, then they slow dance. He asks about her prom king. Hil says someone took his place.

More: Hunter King back to Y&R

At HWG, Shauna arrives and meets Lily and Mattie. They watch as Charlie and Shauna finish getting ready and Lily takes a photo. Downstairs, Arturo informs Abby he’s made arrangements with work to accompany her to Miami. They’ll be each other’s tour guides, and can’t stop smiling.

Jack and Kyle meet at Crimson Lights. Jack questions his right to defend the Abbott legacy to the one man who is John Abbott’s son. He muses maybe he should take his skills and experience somewhere new. Jack thinks Kyle’s in the same boat and decides he and Kyle would make a great team, and they shouldn’t spend another day letting Billy slow their momentum.

At Jabot, Jack asks to speak to Billy and tells him their visions for the company are incompatible – he won’t stick around for it, and has resigned. Jack says Kyle feels the same way and prompts his son to quit also, but Kyle tells his father he’s sorry, but he can’t. Jack walks out as Billy asks, “Don’t do this.”