Thursday May 24, 2018: Nick and Sharon remember Cassie, Phyllis and Billy have sex in the office, and Kyle takes an interest in Tessa. 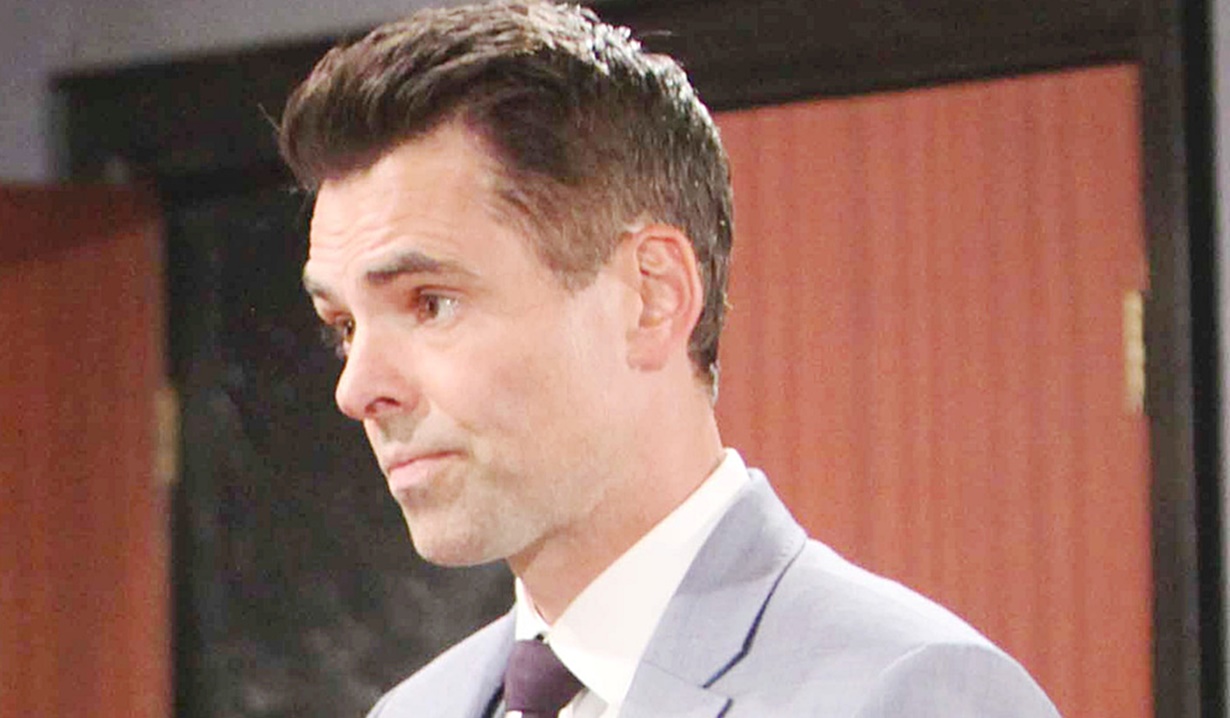 At Jabot, Ashley checks in with Billy, who still hasn’t read her business plan. They discuss his ‘open access’ design and plans to hire a team for R&D. Ash thinks it sounds too ambitious, but Billy’s unconcerned. Kyle arrives, and Billy credits him for supporting his dad. They commiserate about feeling like outsiders. Billy wants Kyle to have his back. Kyle asks for the same in return. He wants Billy to eliminate the blood Abbott clause and let Jack be CEO. Billy feels Jack’s not in the right emotional place to lead the company. Kyle smirks as Billy claps him on the back. Billy asks Kyle to renegotiate Jack’s deal with Hamilton-Winters. Kyle thinks it’s a solid deal, but agrees to do it.

At Sharon’s house, Mariah gets in on the debate about whether Nick should go back to Newman Enterprises. Nick argues Victor almost died; that has to change a person. Sharon feels Victor will go back to jerking his kids around. She’s afraid Nick will wind up spinning his wheels under his father’s thumb. Mariah sees both sides. Talk turns to it being Cassie’s anniversary. Sharon went to the cemetery with Nikki earlier, but agrees to go again with Mariah. Once alone, Nick takes a call, says he’s missing Cassie, and asks the caller to come by. Soon, Phyllis arrives. Nick shares he may be returning to the corporate world. She thinks that’s great. He reveals Victor asked him back to Newman. She asks, “Are you out of your mind?” They go over his reasons. Phyllis thinks he’s setting himself up for disappointment. Sharon returns and thanks her. Phyllis learns they’re back together. She’s unsurprised, but neglects to comment since they’re dealing with enough today. At the door, Phyllis urges Nick to think hard – if she and Sharon agree about Newman, that should tell him something. After, Nick leaves to walk.

At the stables, Nick replays Sharon and Phyllis’ arguments in his mind, then pulls out a photo of Cassie. He asks ‘Squirt’ if she thinks he’s making the right decision. Sharon appears and they discuss how Cassie loved it there. They agree she’d be happy they’re back together. Nick asks about Newman again, and Sharon reiterates she’ll support his decision. Nick says JT tried to kill his father, but instead he drew the family closer. They embrace as Sharon becomes emotional. She reveals she still talks to Cassie every day. Nick does too. They marvel she was wiser than most adults. Nick has an idea and asks Sharon to come with him.

At the Club bar, Ashley thanks Neil for being there for Jack at the cabin. She explains they had no choice but to install Billy as CEO and expresses concern about him embracing his new role with relish. Neil guesses he’s gone rogue. Ash reveals she’ll wait a bit, get rid of the blood Abbott clause, then appoint the right person for the job. Neil wonders if it would be Jack or Kyle…or Ashley. She muses cryptically, “I really like my job at Newman.” Up at Hamilton-Winters, Neil finds Tessa playing guitar. They have a friendly conversation as Kyle arrives. Neil agrees to renegotiate Hilary’s deal in Devon’s absence. Neil feels he could demand a substantial increase given the ratings, but suggests they keep the terms as is. Kyle shakes. Neil leaves and Kyle introduces himself to Tessa. Mariah arrives – she came to see Tessa, and asks if she’s free to get food and a movie. Tessa accepts. Kyle invites himself, and they decide to let him tag along. Tessa and Kyle exchange a look. As they’re deciding on a movie, Mariah gets called away by Hilary. Kyle asks if Tessa would still like to go. She declines.

Phyllis joins Billy in his office and laughs at Gloria being on a paint run with Arturo, who is ‘hotness personified’. Billy wonders if he should be jealous and they canoodle. He talks about wanting to make his father proud. Phyllis says he makes her proud. They start having sex. Ashley arrives, knocks on the locked door, leans on Gloria’s desk, and sighs. Eventually, Phyllis emerges and Ash suggests she adjust her skirt. Phyllis notes the big window will need good blinds. Billy doesn’t want a lecture from Ash. She only wants a serious conversation, and asks about her business plan. He’s been too busy to get to it. Ash drops a huge file on his desk. He promises to go over it tonight, but tosses it in the wastebasket once she leaves.

At Crimson Lights, Nick and Sharon slow dance. He says he followed his heart and it led back to her, now he’ll follow his heart and do what’s best for his family. “I’m going to accept my dad’s offer and go back to Newman.”