Wednesday May 23, 2018: Billy makes changes at Jabot, Sharon fights to keep Nick out of Newman Enterprises, and Abby helps out Arturo. 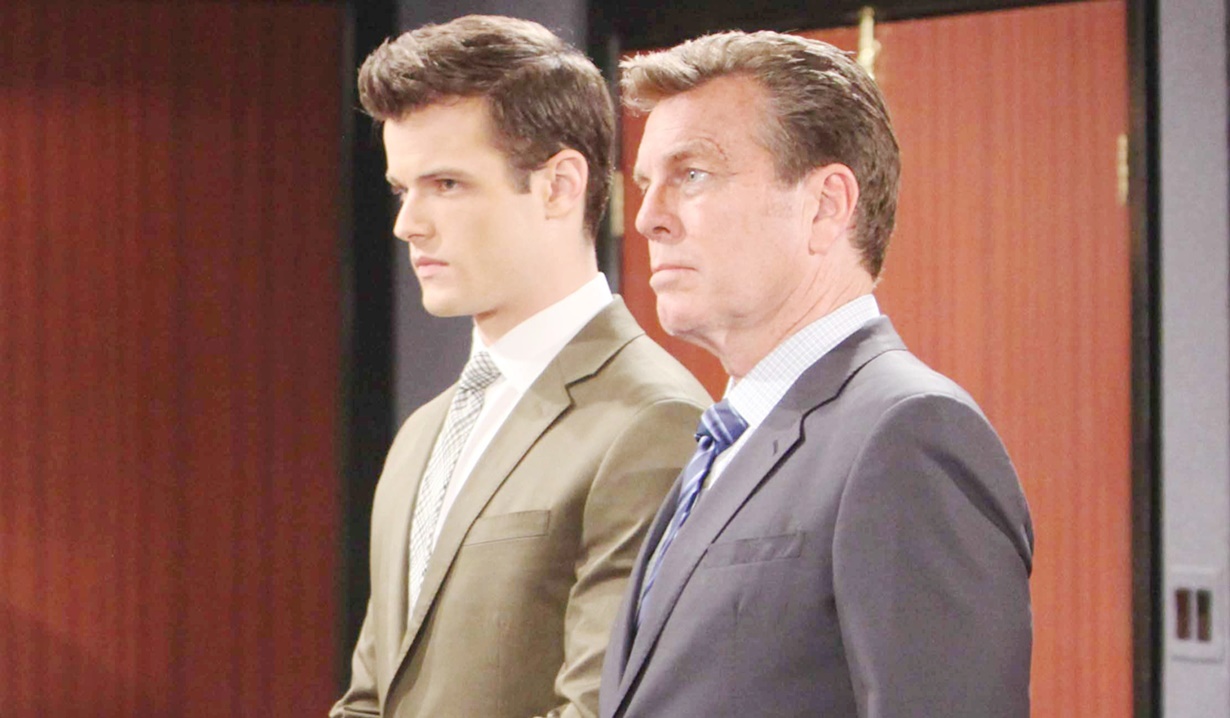 At Jabot, Gloria questions Billy’s plan for a window between the CEO office and reception as Arturo weighs in. Billy reminds her John didn’t wall himself off – they’re a team. Gloria’s on board with Arturo being around, and admits Billy has some solid ideas. Jack arrives, and Kyle joins them, as Billy explains they’re doing a refresh – as long as he’s CEO, he’ll move the company forward. Billy and Arturo step into the office and Glo assures Jack she’s on his team. Jack joins Arturo and Billy to see the plans. Jack refers Arturo for his tailor for the New Hope fundraiser. Once Arturo’s gone, Jack informs Billy he will attending the fundraiser as an investor, not as CEO of Jabot. After, Jack learns he will have to share an office with Kyle as Phyllis arrives. Kyle pulls Jack away and Gloria hisses at Billy to find a solution. Billy and Phyllis confer about Jack’s denial and pain. Billy worries about things changing between him and Jack.

At home, Sharon notes if Nick can’t sleep because of Victor’s request to for him to return to Newman, maybe it’s a sign. She’ll support him regardless, but recalls he worked hard to separate himself. Nick agrees, but is seriously considering going back. Sharon questions why helping people suddenly isn’t enough for him. Nick wants the push and pull with his dad to stop, is thinking about his kids, and wants to protect Victor’s legacy. Sharon thinks his attitude is coming from another century and worries about him getting sucked into Victor’s pathology again. Nick feels he can handle his dad now. Sharon’s counters that no one handles his father; she’s scared, and doesn’t see how things will be different. Nick feels it’s like their relationship – this could be the one that lasts. Sharon texts someone to meet her at the coffeehouse.

At Crimson Lights, Arturo asks Abby for help choosing ‘business attire’ for the fundraiser. She agrees. On the patio, Jack apologizes to Kyle for screwing him out of his birthright – maybe he’s better off with Victor. Kyle notes Victor’s not his father and says, “It’s you and me now.” Jack appreciates the pep talk. He affirms that when Billy screws up – he always does – they’ll step in and take their rightful places – Jack as CEO, Kyle his second-in-command. Inside, Sharon meets Victoria and needs her help to keep Nick from making a terrible mistake. Victoria learns Nick’s considering returning to Newman and declares it’s a wonderful idea – she needs someone on her side with Ashley there. Sharon’s taken aback. Victoria adds with Nick there, she’ll feel more emotionally protected, and he won’t have time to focus on JT. Sharon wants her to think about what this will do to Nick.

In Fenmore’s, Arturo marvels that Abby’s shopping connections as he tries on a suit. She doesn’t find it expensive enough and hands him another one, warning him not to look at the price. Abby laughs, “Hurry up, strip down!” Abby takes a call from Victoria, who asks her to join her to convince Nick to go back to Newman. Arturo listens as Abby scoffs that she’ll just get kicked further down the food chain, and tells Vikki she’s on her own. Arturo lets Abby know he overheard, emerges in the dashing suit, and hugs her. Talk turns to the price of the suit. Arturo thinks it’s ridiculous, but will buy it.

Jack rejoins Billy and Phyllis at Jabot and apologizes for his earlier reaction. Phyllis exits. Jack asks Billy to give him time to get used to not being in charge. Billy notes he always told Ashley to embrace being number two. Jack will do what he can to make things work, and asks what his title will be. Billy says whatever he wants other than CEO. Billy calls a team-building meeting. Jack bickers with Billy about bringing a new creative direction. Phyllis supports Billy.

Sharon lets Victoria into the house. Vikki tells Nick she loves the idea of him returning to Newman – they can handle Victor together. Sharon argues against it. Nick feels it could be his last chance to do something big. Victoria wants someone by her side she can trust, and advises Sharon this isn’t a roommate issue. Sharon informs her she and Nick are back together. Victoria needs her brother’s support right now and no one understands that better than a Newman.

Back at Crimson Lights, Abby urges Arturo to seek out Devon at the fundraiser, then offers to be his plus-one. Arturo notes he only RSVP’d for one, and doesn’t want to ask Nikki for preferential treatment – he’ll go alone.

At the Club, Kyle broods about Jack having to suck it up where Billy’s concerned. Jack muses that getting rid of him will be tougher than he thought.