Friday May 18, 2018: Jack reaches out to Neil, Hilary accepts an invitation, and Billy and Phyllis worry about Jack. 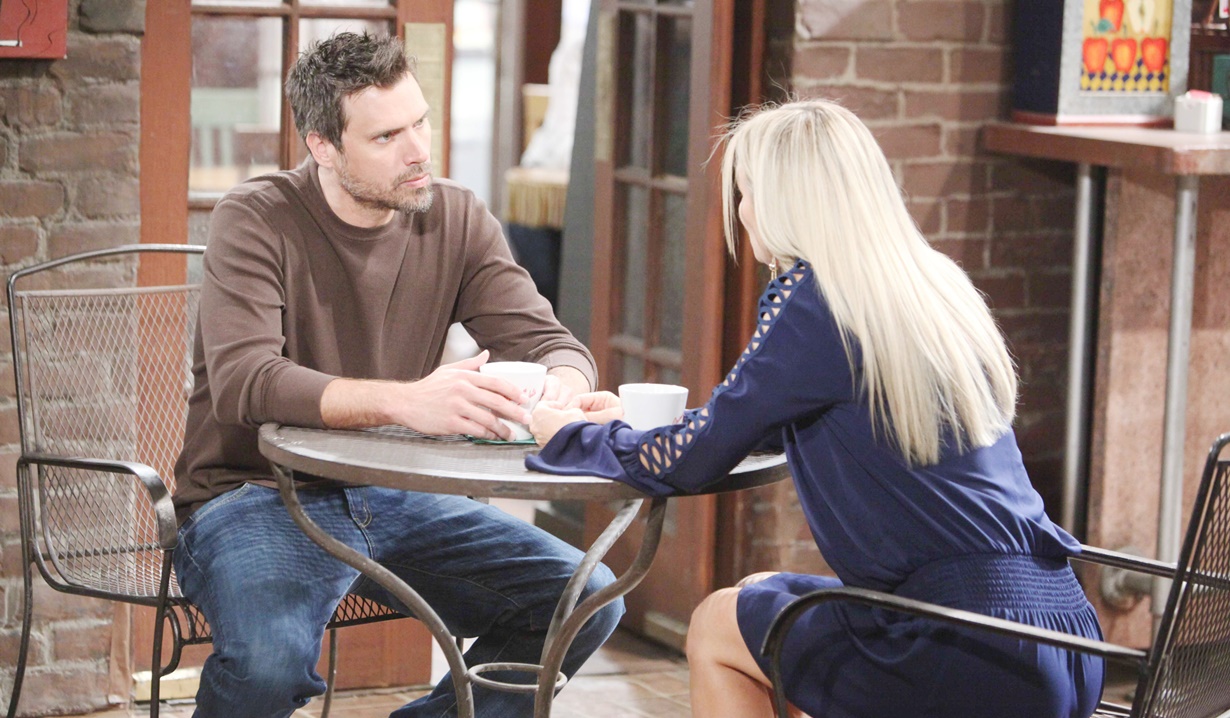 In bed at home, Sharon and Nick discuss their uncomplicated and fun arrangement, and agree they’ve both picked up some new skills. They start kissing and have sex. After, Sharon wants to order pizza, but Nick remembers it’s the night of the New Hope dinner. They scramble to get ready. Nick zips Sharon’s dress and recalls the Polynesian dance in high school – she’s more beautiful than ever. They agree they’ll have to be careful about their vibe tonight.

At the Club, Nikki takes a call from Phyllis, who relays that Victoria confessed to Paul, before disconnecting. Up at HWG, Hilary lets Devon know she’s in on his nursery plans for the penthouse, and won’t pry. Devon grins as he says he just wants their kid to have the best, and he’s excited about being a father. Hilary feels the same way, but warns about managing expectations. Devon’s confident it won’t take multiple attempts. He invites Hilary to the New Hope dinner and she readily accepts.

At Jabot, Phyllis greets Billy – she presumes he hasn’t heard anything about Jack yet. Billy doesn’t want her to get too upset, but warns Jack feels like he’s nobody. Phyllis worries he’ll act on his dark thoughts and worst impulses. They discuss Jack’s painkiller addiction, and lament him not wanting family when he needs them the most. Phyllis marvels that Billy’s been in Jack’s shadow and now is the only Abbott son. Billy wants her to attend the New Hope dinner with him. She will.

In the cabin, Jack contemplates a glass of scotch and a painkiller. Suddenly, he makes a phone call and says, “I need help.” Soon, Neil arrives. Jack updates him on the car wreck. Neil will help him work through this. He questions if Jack’s taken any of the painkillers and suggests he take a walk. Jack becomes defensive, but Neil says he called him because he needed someone to remind him of all he has to lose. Jack already lost the most important thing – who he was. He was always so proud to be John Abbott Jr, and to protect his legacy, and has lost his identity. Neil feels he’s still the same Jack Abbott who helped him and created a foundation with him – nothing can change that. Neil wonders who doctored the movie. Jack doesn’t care since it’s true. Neil’s contention that Jack focus on the company causes his friend to holler – he has no foundation underneath him. Neil warns if he takes the pills, he’ll go down with him. Jack won’t let Neil break his sobriety. Neil demands Jack change his perspective and look at what he has, before leaving.

At the Club’s New Hope dinner, Nikki interacts with Hilary and Devon before greeting other associates. Nick and Sharon arrive. Nikki takes Nick aside and asks him to flirt with a potential donor, Jane (played by Laura James). She makes introductions. Sharon looks on as Nikki’s male associate, Lawrence, (played by Zach Dulin), chats her up. While seated for dinner, Sharon keeps an eye on Nick and Jane, Hilary and Devon discuss his enthusiasm for the pregnancy, and Phyllis encourages Sharon to snap up Lawrence. She pulls her away for a ‘confab’ and Nick takes note. They meet up with Nikki to discuss what Victoria told Paul. Nikki explains she was backed into a corner. They bicker about Phyllis not hiding the cellphone better and what they should do next. Phyllis warns they must be careful; there’s more on the way. After, Sharon and Nick have eye-sex at the table. When Lawrence puts his arm around Sharon, Nick abruptly announces he’s leaving. Sharon decides she’ll go too. Nikki gets a pinched look and thanks everyone for coming. By the bar, Hilary updates Phyllis on the latest developments with Devon, while Nikki and Billy worry about Jack. Hilary, also concerned, joins in. Billy rejoins Phyllis, and they fret about it getting out that he’s running Jabot. Nearby, Hilary and Devon talk about raising the baby and are very close when Phyllis and Billy interrupt to say goodnight. Devon and Hilary decide to go check out a new venue and leave arm-in-arm.

At home, Nick crabs about Lawrence, while Sharon notes he made an impression on Jane. Nick reveals he’s not interested in dating. He’s uncomfortable about their friends-with-benefits arrangement and suggests calling it off. Nick admits Sharon’s all he can think about and he was jealous of that guy tonight – it can never just be about sex with them – it’s got to be all or nothing. Sharon wants all of it too. They kiss passionately.

Nikki is irritated to hear Sharon and Nick are back together again.

Victoria Confesses to Seeing JT the...