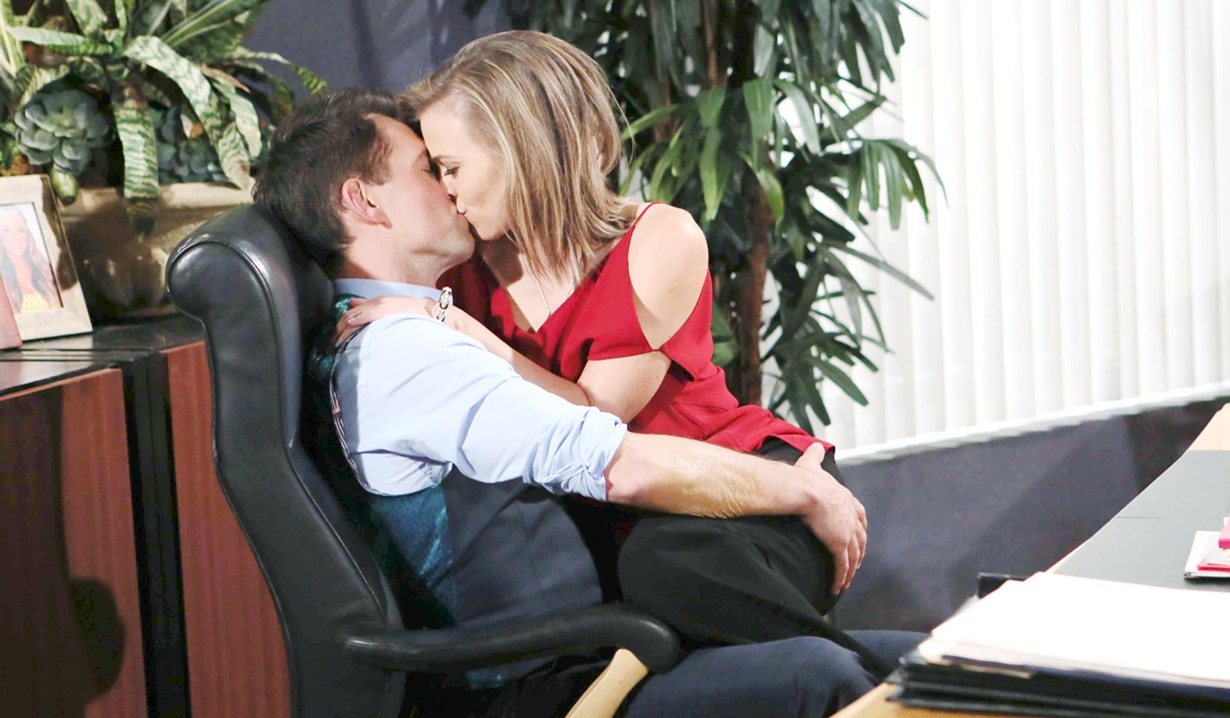 Kyle arrives at Jabot and tells Billy Jack’s been drinking. Billy reads the DNA results and they further discuss the situation. Kyle reports Jack took off. Billy tears the paper up and says, “Forget DNA.” They’re family and will handle this as such.

At Newman Enterprises, Victoria gets a text from Phyllis regarding tracking JT’s cellphone while in a meeting with Ashley and Abby. Ashley takes a call from Billy and she and Abby rush off to Jabot. Victoria sends a text asking what’s happening.

At an undisclosed location, Phyllis and Nick apprehend a guy they assume to be JT, but it’s a homeless man. The police arrive and chastise Nick for using a police scanner and interfering. but suggests he use headphones. Devon counters that would affect his process. Hilary decides to stay and keep working. Devon notices she’s moving to the music and moves in close behind her, before pulling her into a dance. Soon they’re intimately close with heads together. Based on body movement, Hilary concludes he should probably sign the artist.

At the ranch, Nikki explains to Arturo that she and Victor probably won’t be trying the open marriage experiment again. Arturo’s glad he helped give her confidence. They’re happy to keep working together. Arturo gives her a last kiss to reinforce how beautiful and wanted she is…as Victoria arrives. Nikki introduces them, and Arturo leaves. Nikki explains that was a goodbye kiss. Victoria updates her mother on Phyllis’ text and they speculate. Vikki worries JT’s alive, but Phyllis arrives and says it wasn’t him. She reports the police took JT’s phone and Nick’s not backing off.

At Jabot, Kyle, Billy, Ashley, and Abby confer about Jack. Abby reminds them her mother knows how he feels right now. Ash recalls how it seems engulfing; Jack needs all of them right now. Billy steps out to take a client call, and Kyle tells the women he’s afraid of what his dad might do next. Billy returns – Jack forgot to sign off on a massive cosmetics contract before the deadline. Ash thinks they can find Jack and salvage John’s legacy. Ashley calls an emergency meeting about moving forward and nominates Billy as the new and permanent CEO. It’s not what Billy signed up for; he’d rather Ashley stepped up. She reminds him of the clause. Phyllis enters and warns Ashley’s making it sound like Billy’s the default choice when he’s talented enough to lead the company forward and make John proud. Ash agrees with Phyllis for the first time ever. The vote confirms Billy as CEO. Billy will step up and wants to revoke the Abbott clause. Ash warns he’d have to call another meeting and vote. Billy sends Kyle and Abby to find Jack. Once alone, Phyllis works to calm Billy, who’s uptight about the CEO position being thrust onto him. She describes a paradise and he pulls her onto his lap. Ashley enters and ‘gifts’ Billy with her business plans for Jabot so he’ll succeed. Ash exits, and Phyllis suggests he come up with his own ideas. Billy’s fine with using Ashley’s ideas, he just wants Jack back. Phyllis gives Billy another pep talk. He misses waiting for her at their apartment, but she says he needed more.

At Crimson Lights, Sharon tells Nick he’s lucky he got off without charges, while Victoria informs her brother this wasn’t his call – JT hurt her, and he’s making it harder on her. She wants him to drop the vendetta so she can move on. Nick can’t allow JT to squirm out of this, and is irked that Phyllis texted Victoria and distracted her from work.

At the Club, Abby sneers about Kyle being such a loving son and wonders what he thought would happen after he pulled that memory card out of the ashes. Kyle insists it’s complicated, but Abby feels he’s disturbed. She’s convinced he gave Victor the ammunition to hurt the family and warns she’ll find out.

Abby arrives at Crimson Lights and fills Arturo in on her search for Jack. Arturo talks it through with her and suggests she hold tight. On the patio, Nick muses that JT may have dumped his cellphone at the airport on purpose and could be hiding in plain sight. Sharon wants to go home, where they’ll be alone.

Victoria returns to the ranch, and complains to Nikki that Nick’s become relentless. Suddenly, Victoria gets a call from the police – they read the texts on JT’s phone and want to talk to her. Concerned it’s all unravelling, Victoria asks, “What are we going to do, Mom?”

Jack Crashes His Car While Drinking...