Monday May 14, 2018: Jack reacts to the DNA results, Victoria and Phyllis return, and Abby accuses Victor. 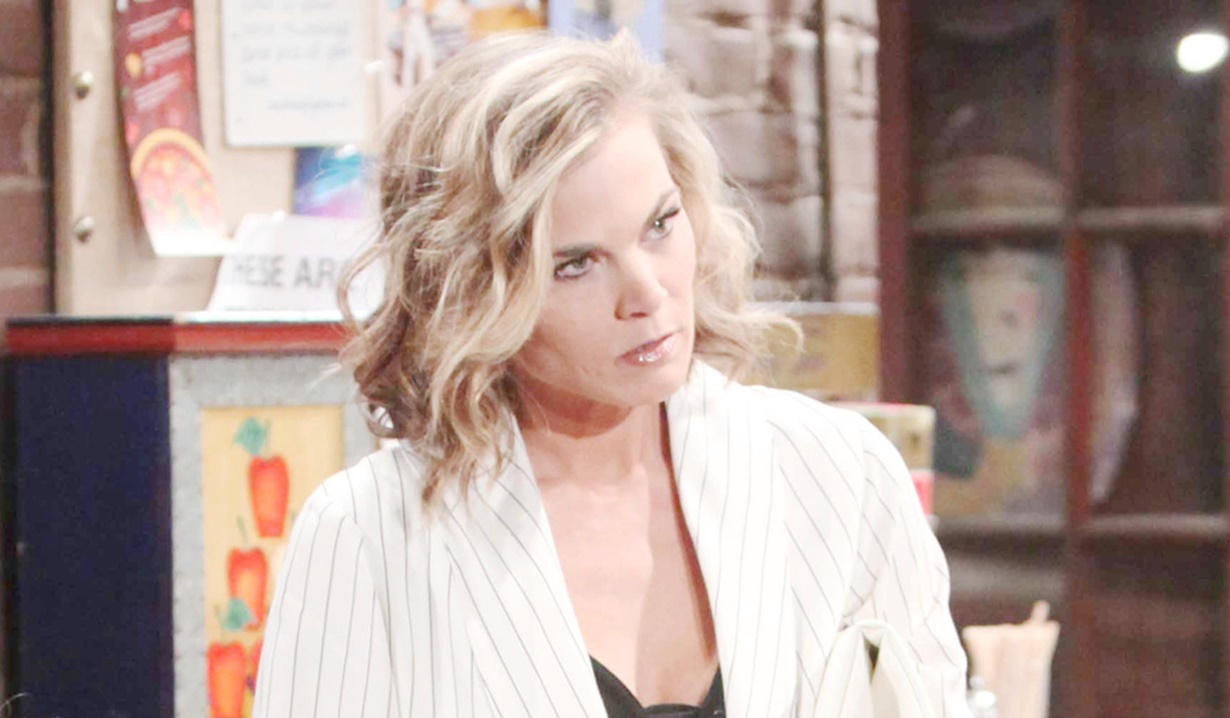 At the Abbott house, Kyle finds Jack sitting in the dark contemplating the envelope containing the DNA results. He wants to know what it says since it affects him too. Jack pockets the envelope – he’s John Abbott’s son and no lab results will convince him otherwise.

In Crimson Lights, Sharon lets Nick know they’ll be alone tonight – she may run a hot bubble bath. Nick muses, “For two?” A plan is set. Phyllis and Victoria appear. Nick’s still puzzled by them being friends. They insist they’re just ‘chummy’ and respect a few things about one another. Nick leaves. Victoria informs Sharon that Phyllis made her see confessing was a bad move. Sharon’s glad they’re on the same page. Vikki goes, and Phyllis asks if Sharon diverted Nick’s attention from JT. Sharon says, “Actually, I did.” Phyllis wants to know how. Sharon tells her he’s helping Faith with an anti-bullying campaign. Phyllis urges her to keep it up. Sharon replies, “Believe me, I will.”

At Newman Enterprises, Abby storms into Victor’s office, and asks, “How could you?” She accuses him of turning her grandmother’s big night into a fiasco in his ‘frankly boring’ feud with Jack. Victor denies it, but Abby knows about his connection to Kyle and how far he would go to hurt Jack. Victor makes her leave. Later, Victoria arrives. He’s sorry about what happened with JT, and feels he failed her. She reminds him she’s a grown woman. Talk turns to his recovery and return to work. Victor gives Nikki credit for helping. Vikki wishes he’d let her run things. Kyle arrives as Victoria’s leaving, and announces Victor’s mentoring him. Once alone, Kyle confronts Victor about how the footage got in the movie. Victor turns the accusation back on him – the blame’s squarely on Kyle’s shoulders. Elsewhere, Victoria runs into Abby and tells her she’s getting rid of the contents of JT’s office to move on with her life.

In his office, Jack talks to John out loud. Billy arrives, and asks about the DNA results. Jack feels badgered and wants him to leave. Billy repeatedly reassures him and asks to help, but Jack urges him to go. After, Billy kisses Phyllis by the elevator, then warns Jack has his wall up. After Billy leaves, Phyllis walks into Jack’s office. She won’t leave until he answers the question, “Who are you?” Jack retorts he’s a busy man. Phyllis talks up how strong he is, and reminds him of all he’s conquered. Jack has no control over what’s in the envelope. Phyllis argues he can control how he reacts, and the results can’t take away the decades he was John’s son. She asks what John would tell him to do. Jack realizes he’d want him to man up. Phyllis warns him not to let John down by being afraid of the truth. Once alone, Jack wipes away a tear. He opens the envelope and the results show he is not Billy’s half-brother. Jack grimaces and squeezes his eyes shut. Later, in the reception area, Billy watches Kyle arrive. They discuss Jack’s struggle with the paternity question. Billy assures Kyle the Abbotts will never abandon him or his father. Kyle goes in to see Jack, but he’s gone. Kyle reads the DNA results on the desk.

Phyllis takes Nick by surprise at Sharon’s place. He offers to give Sharon a message, but she’ll wait. Phyllis learns Nick’s listening to a police scanner app to find JT. As she’s fishing for information, the scanner reports JT’s cellphone signal is back on the grid. Nick heads for the location and Phyllis insists on accompanying him.

In the car, Nick and Phyllis learn JT’s cellphone is nearing Victoria’s house.

Kyle locates Jack at home, drinking. He’s truly sorry, and assures Jack he’s not alone. Kyle wants to figure out who they are now, together. He adds Jack’s still John’s son in the ways that count, but Jack feels it makes sense he’s not a blood relation – he never measured up. Jack beats himself up, and rants that he can’t run Jabot anymore. Kyle wants him to stop making this about him – they’re in this together. Jack laughs about the karma of him putting the blood Abbott clause in place – he did it to himself! Jack walks out.

Billy steps up at Jabot.