Friday May 11, 2018: Lily celebrates Mother’s Day with her family, Kyle lashes out at Nikki, and Abby questions Kyle. 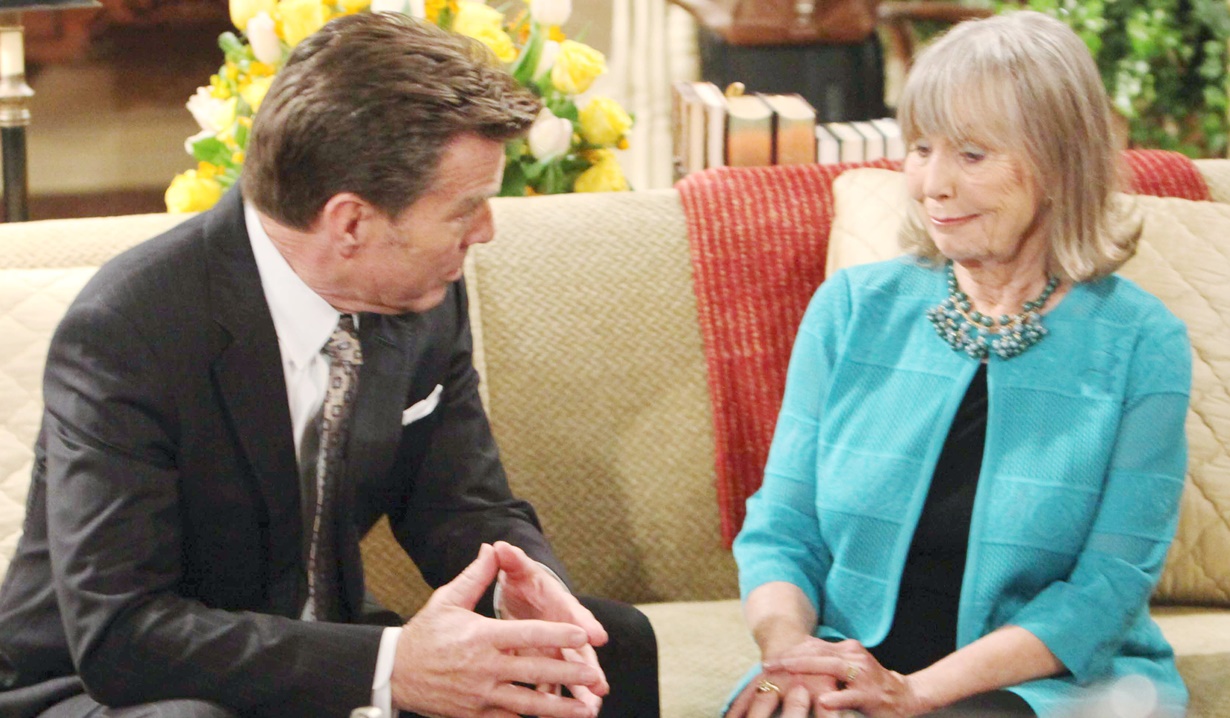 In today’s The Young and the Restless recap…

At the Abbott house, Traci, Abby, and Ashley celebrate Mother’s Day with Dina, who asks Traci, “Shouldn’t you be spending this day with your own mother?” Jack arrives – he has his receipt from the DNA lab as a gift – he had a swab taken to see if he’s an Abbott.

At Sharon’s place, Nick wants to do something for Sharon on her special day. She moves in close, but Mariah interrupts. They cover, and Nick sends Mariah to the store for sassafras. Mariah, clearly suspicious, agrees. Once alone, Sharon mocks Nick, “Sassafras?” and laughs that he’ll have to make gumbo. They decide to take advantage of their small window of time and start kissing.

At the ranch, Nikki answers the door to Kyle, who’s looking for Victor. He’s not there, and Kyle mentions the drama at Dina’s screening. Nikki brings up Dina stabbing her. Kyle scoffs that she got off with only a scratch – he wishes his mother had been so lucky when she tangled with Nikki. Nikki’s sorry his mother is gone. Kyle snarks she’s not gone, she’s dead, because of her. Nikki protests. Kyle rants about Nikki hurting people and playing God with other people’s lives – she literally got away with murder.

At the Abbott house, Jack unnerves the women by swigging whiskey and ranting. Kyle appears as Jack talks about cross-checking his paternity with Billy’s DNA since he’s definitely John’s son. Ash orders Jack to the kitchen, and Abby warns Kyle they’re onto him thanks to Ravi – he’s responsible for the family going through hell. Kyle admits he got the clip but denies editing the footage or leaking it – Jack wasn’t the only one with something to lose if it got out. Abby confers with Ashley, who feels Kyle may be telling the truth. They rejoin Dina, and Jack keeps insulting his mother. When Jack references Dina sleeping with half the country, Kyle barks at him to show some respect. Traci shepherds Dina out, and Jack starts in about women keeping secrets in the family, Ashley did it and so did Diane. Kyle hollers. Jack apologizes, but Kyle leaves, while suggesting he’s not the only one Jack needs to apologize to. After, Abby goes to find Kyle. Traci snaps at Jack to get himself together – it could be Dina’s last Mother’s Day. Dina enters and briefly remembers Traci’s her daughter. They embrace. Traci tears up over the beautiful moment. Jack looks chastened. He takes Dina aside and apologizes. He believes she’s wrong about his paternity, but even if she’s not, she’s the only parent he has left. “Happy Mother’s Day, Mom.” They embrace.

Nikki calls from outside Sharon’s door, so Sharon and Nick button up quickly and let her in. Nikki reveals she cancelled the garden ceremony at the park, and asks to go over charity stuff with Sharon. Nick’s left behind as they bustle out the door.

At the ranch, Nikki frets to Sharon about Nick’s determination to find JT, having no idea she killed him. Sharon asks where this is coming from. Nikki relays tearfully that Kyle taunted her about Diane’s death and it stirred things up. Sharon reassures her in every instance she was acting in self-defense, and urges her to keep it together. Nick enters as Sharon assures Nikki she’s a good person and mother, and they embrace. He wonders what’s going on. Sharon explains Nikki got emotional missing Victoria. Nick produces something to cheer her up – a sign for Chancellor Garden. Nikki loves it.

The Ashbys are having Mother’s Day brunch at the Club, and Devon says it’s on the house. They toast to Lily. Hilary arrives at the bar and updates Devon that Nikki cancelled the garden planting ceremony without telling her. Devon’s concerned about her stress and takes her over to see Sam. Hilary hopes Lily is having a wonderful Mother’s Day. Up at HWG, Hilary and Devon work together and discuss Simone’s departure. Devon reveals he has no plans to date – it’s too complicated. Hilary feels the same. Downstairs, the twins and Cane list reasons they love Lily, and remember Drucilla. Mattie notes Sam won’t remember his mom. Lily tells Sam she loves him like her own. In the office, Hilary tells Devon Mother’s Day is never easy – she wishes she could talk to her mom. Devon’s certain she’s with Hilary in spirit. Talk turns to Hilary’s possible pregnancy. Devon hopes this time next year they’ll be celebrating Hilary as a mom.

Mariah hands over Nick’s sassafras at Sharon’s place, and gifts her mom with a superhero mom t-shirt. “I love you, Mom,” she says.

At Crimson Lights, Abby and Kyle discuss Jack. Kyle realizes she still thinks he messed with Dina’s movie, and denies it again. Abby points out he has a close relationship with someone who would have done it – her father.

Sharon and Nick come to a decision.