Jack Hollers at Dina to Shut the Hell Up

Wednesday May 9, 2018: In today's The Young and the Restless recap, Billy supports Jack, the Ashbys celebrate Charlie's work, and Kyle wants his share of the sympathy. 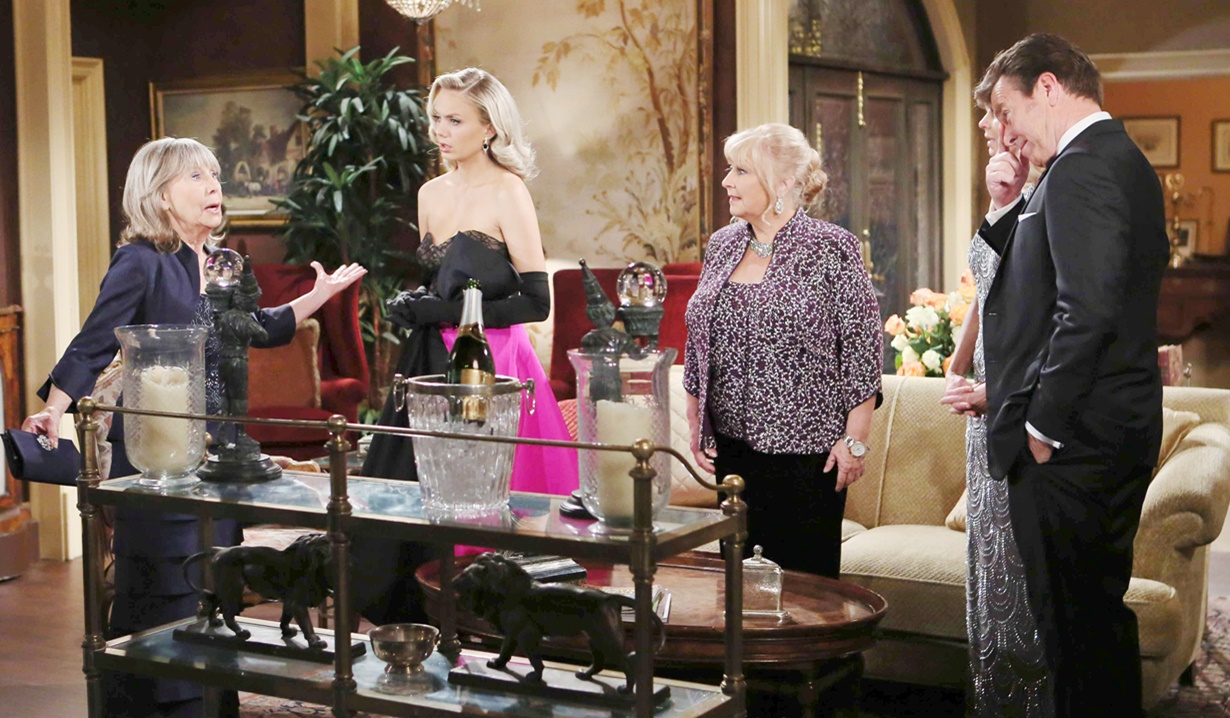 In the theatre, Dina asks why the film stopped – it was just getting good. Jack demands to see the last 10 seconds again. Onscreen, Dina repeats, “Jack is not John’s son.” Later, alone, the Ashbys applaud Charlie’s effort, but he’s upset and explains that he didn’t put the last clip of Ms. Mergeron in there.

At the Club bar, Jack orders a double as Billy assures his brother someone made a mistake. Jack stews that it might be true and notes it wasn’t in the preview he saw – it was clearly a message from someone who went to a lot of trouble to hurt him. Billy tells Jack he’ll always be the son John was proud of, and assures him they’ll always be Abbott brothers, it doesn’t matter what DNA says. Jack recalls giving Ashley that speech, but argues that if what Dina said is true, it changes everything. Billy challenges Jack – all the love that makes a family is still there. Victor appears, feigning sorrow over the public reveal. Billy intervenes to take Jack home.

At the Abbott mansion, Traci, Ashley, and Abby arrive with Dina, who still can’t understand why the screening stopped. Traci takes her upstairs. Abby and Ashley puzzle over how this happened. Kyle arrives and reports Jack wouldn’t come with him. Abby and Ashley continue to fret about Jack, and Abby assures Kyle that Dina knew what she was saying. Kyle notes that means he’s not an Abbott either, and snarks about their lack of concern about him. Abby knows how he feels, but thinks it’s different for Jack. Ash backs her up. She knows what Jack lost today. Kyle argues all the moments with John didn’t get erased. Abby chastises Kyle for acting like it’s a competition of who’s more hurt. Kyle sneers about being an outsider from the loving family. Abby wonders if he thinks Jack deserved this. Kyle keeps belly-aching about his father never noticing him and talk turns to Victor taking him under his wing. Ash and Abby warn Victor may be using him and will expect a return on his investment. Kyle complains about Jack’s treatment of Ashley, and Traci appears to chastise them – Abbotts stick together. Billy arrives with Jack, who tells the others he needs them more than they’ll ever know. Abby and Ashley come clean about hiding the interview and reveal they ran a DNA test. Jack asks, “What were the results?” Abby replies, “I’m so sorry, Uncle Jack.” Jack looks crushed. He confronts the women for keeping it from him. They didn’t want it to be true. Jack disputes Kyle’s statement they lost something huge today – Billy reminded him of that. Jack cries about living every day trying to live up to John’s example. Billy insists it may not be true. Talk turns to how the footage the women destroyed got in there. Abby presumes it’s her fault. They all agree it could be true – they know what Dina was capable of. Jack recalls John caring for him the night she left, and asking for Jack’s help with his sisters. Kyle notes he pulled off being a father and mother. Dina appears, and rails about them talking about her – John would be ashamed – they built their family on honesty and respect. Jack barks, “Will you please shut the hell up?” Dina addresses him as ‘John’ and Jack hollers that he’s not John, he’s her son, Jack, and rants about her transgressions. Traci trots Dina out, as Jack goes on sneering about their ‘classy’ mother. Ashley reminds him she’s old and confused and can’t hurt their family anymore. Jack references the moment in the theatre and declares John is the only parent they have – he won’t let that woman’s demented blatherings ruin his life.

At Crimson Lights, Charlie beats himself up over the mistake. Cane reassures him he’s not responsible for what happened. Lily agrees it was out of his control. Charlie wonders who ruined everything. Cane reminds him what a great job he did with the clips and presents him with the small award. Charlie gives an acceptance speech, and they share a group hug. Charlie steps aside to worry to Lily, who insists the error wasn’t on his end, and enthuses about him finding something he’s good at. She counsels that successful people aren’t smarter or better, they just refuse to give up. Lily takes the twins home with her, as Cane says he forgot his laptop at the office.

Cane arrives at the Abbott house. His son is hurting and he wants to know why. Abby begins to explain. Cane says Charlie never saw the footage that was added, and warns them not to think about blaming his son for their screw-up.