Tuesday May 8, 2018: In today's The Young and the Restless recap, Sharon and Nick have sex, Kyle receives a gift, and Victor crashes an event. 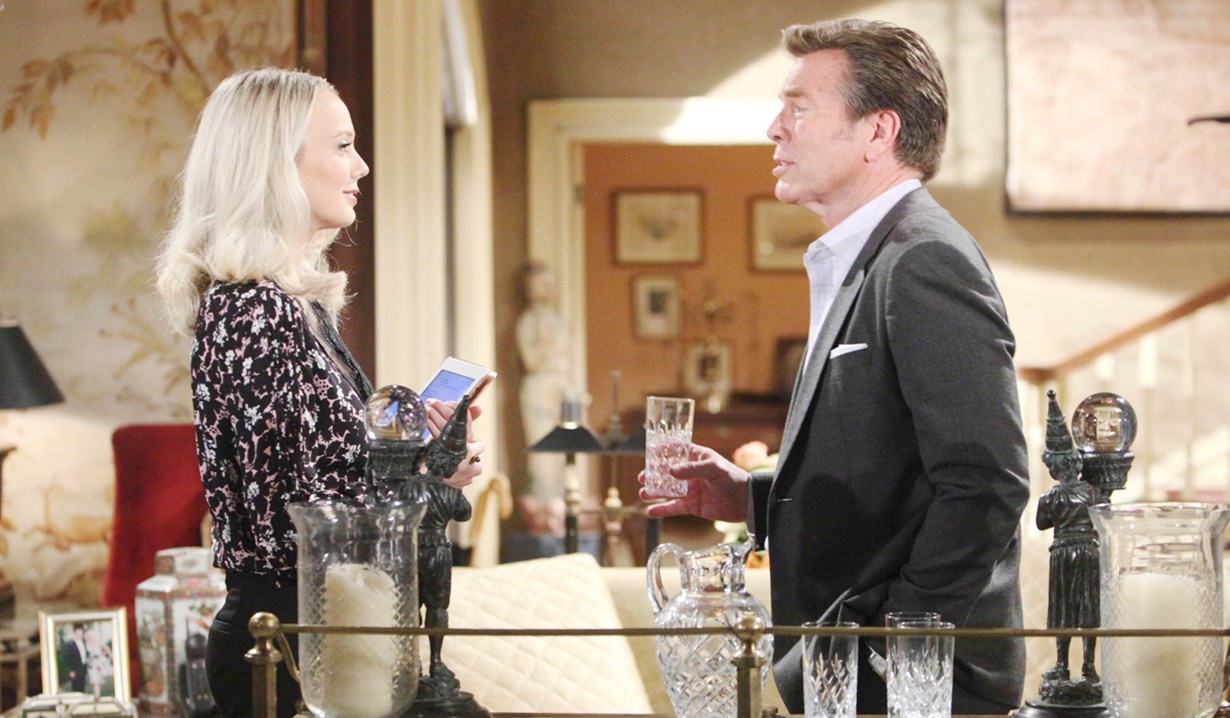 At Sharon’s place, she and Nick fall onto the bed kissing. They undress and begin making love. Afterward, Nick asks if Sharon wants Chinese or pizza. They agree it was a workout, and that they have no regrets. Sharon remarks sometimes you have to follow your instincts. She’s glad they can be normal now. Later, Nick and Sharon order pizza and watch an old movie. Nick wipes pizza sauce off her lip, they kiss, and quickly head back upstairs.

After sex, Sharon wants to talk about where this is headed. Nick’s not ready to jump into another relationship so soon after Chelsea. Sharon acts relieved. They agree to be friends with benefits, though Sharon feels they should keep it to themselves. Nick and Sharon joke it will be a tough arrangement before having sex again.

In the Abbott living room, Dina enthuses about her excellent dinner and asks about Kyle. Jack, Abby, Traci, and Ashley assure her they’ll be at the main event. Dina’s confused as they remind her about the movie. As they get ready, Ashley and Abby hang back to rehash the missing scene that reveals Jack is not John’s biological son. Ash feels what he doesn’t know can’t ever hurt him. Later, Jack tells Ashley and Abby he wants tonight to be just wonderful for their mother and alludes to having one more surprise. Traci appears and reports Dina’s not okay. Dina comes to the living room and wants her mommy to tuck her in. Ashley wants to cancel the screening. Jack gets on the phone, but Dina becomes livid he wants to cancel the premiere of her film, so it’s back on. Ash and Jack feel it will be a night to remember.

At the ranch, Neil notes Victor hasn’t slowed down as Victor pumps iron. Neil wants to publicize his progress and see Newman Enterprises the same way they see Victor – stronger than ever. Neil remarks on the screening of Dina’s documentary that Charlie edited that night. Talk turns to Neil expecting a grandchild via Hilary. Neil shares Devon’s ready to become a parent. Victor reflects on children judging their fathers, and adds that Jack respected his dad but can never be him.

At the Club, Cane admires Lily’s dress. He wants to go upstairs, but Lily chastises that they don’t have time. They enthuse about Charlie’s filmmaking talent. Cane hides a teeny gold statue as the twins appear. Charlie hopes everything will go well tonight. Nearby, Billy angrily phones Kyle to find out why he’s missing a business meeting. Kyle arrives after the client has gone. Billy reached a deal without him. Talk turns to Dina’s screening. Kyle wants to be right there with the family. At their table, Cane assures Charlie he looks good and invites him to put together a proposal and pitch him. Neil joins the Ashby family. Lily reports Devon’s gone to Detroit for a meeting – she’s just glad Hilary won’t be there.

Kyle arrives at the Abbott house, where Jack gifts him with John’s cufflinks. “Wear them with pride,” Jack urges, and goes on about living up to his father’s example. Kyle thanks him and regards the cufflinks with a slightly regretful expression. When Billy arrives, he mentions Phyllis is at a conference with Victoria. Abby wonders if it’s weird for him. Dina makes her entrance and Abby thanks her for sharing her stories before the family heads out. Kyle lags behind and adjusts his cufflinks.

Seated in the theatre, Dina remarks they should have had the screening in Cannes. Charlie admits to Neil that he’s nervous. Jack thanks everyone for coming and makes a speech about his mother’s amazing life and declares that family comes first. The screening’s about to begin when Victor arrives. Jack asserts it’s invitation-only. Neil pipes up that he mentioned it to Victor earlier. Jack repeats Vic’s not welcome. Dina spots him and Jack rolls his eyes as Victor reminds her of their dance at the winter formal. Dina insists Vic stay as her guest, so Jack relents. The film opens with the quote, “What the mind can’t remember, the heart never forgets.” The screening delights all until the point when it cuts to Dina’s declaration about taking John for granted and spending time with other men. Victor grins smugly as onscreen, Dina declares, “Jack is not John’s son.”

Jack Hollers at Dina to Shut the...