Monday May 7, 2018: Nick and Sharon argue about her dishonesty, Jack prepares to screen his mother's film, and Victor continues to demand hard evidence. 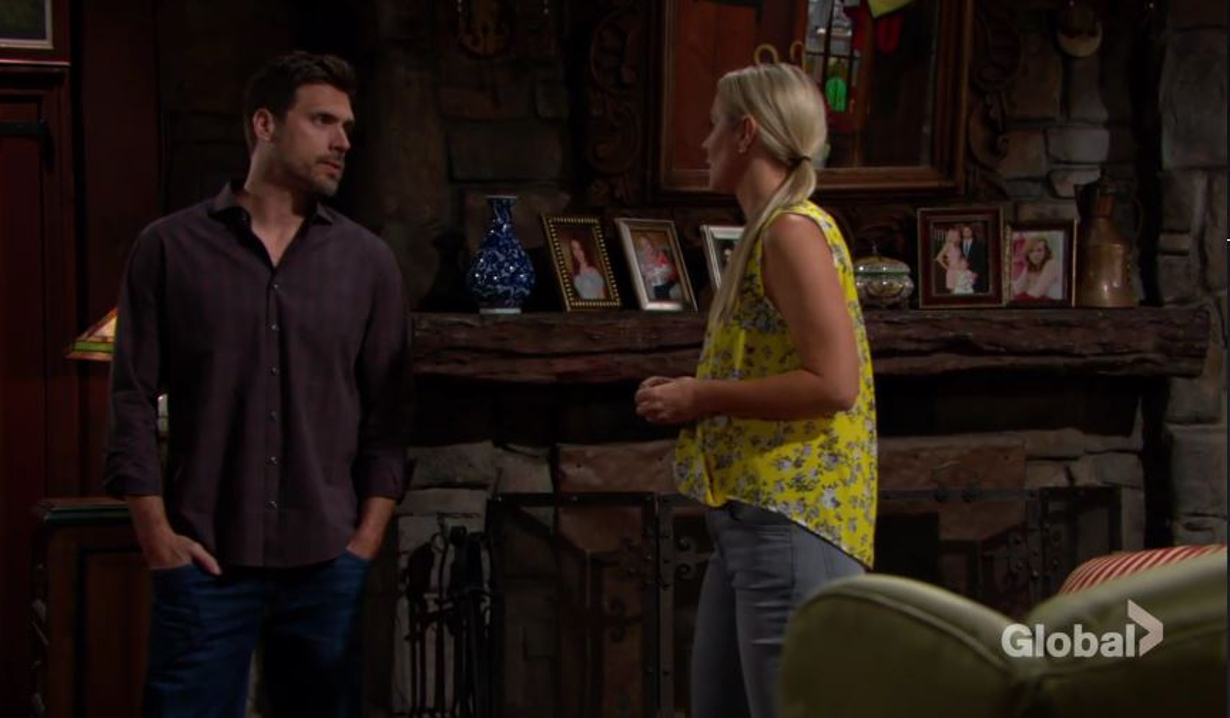 At the house, Nick questions Sharon about the night that JT disappeared. When she’s unhelpful, he threatens to call his sister, but she snatches the phone away. Sharon doesn’t want him stressing Victoria out and insists there is no conspiracy afoot. They debate what could have happened and she lectures him for grilling her. He reminds her that she’s kept secrets from him for years. That hurts her feelings. Nick points out she has a habit of lying to people and catalogues the lies she’s told him. All of that tells him that she’s never trusted him enough to be honest. Sharon insists that she’s changed. He’s confused about how much time she’s been spending with Phyllis and Victoria. It’s really weird. Sharon lays into him for all the times that he’s cheated on her and then says she never holds his past mistakes against him. She accuses him of projecting based on his anxieties about JT. They keep bickering and she tells him to stop trying to rescue people. She storms off and he takes a walk. They come together again. He won’t drop this. He’s sure that she’s deflecting. Sharon claims that she wants him and her nerves are on fire. They kiss. Devon sits with Hilary in the doctor’s waiting room. He’s determined to be by her side for everything happening with the baby. She suggests he must have more pressing things to do but he wants to do right by her and the baby. This is the biggest thing that’s ever happened to him. Hilary is about to tell him the truth when Dr. Chasen interrupts. The doctor is glad Hilary’s partner is there to give her support during the insemination. Devon guesses she’s not pregnant. Sensing some upset, the doctor leaves them alone and Hilary explains she only thought she was pregnant. Hilary tears up and tells Devon her excuses. The few days she thought she was pregnant were the happiest days she ever had. If he can’t forgive her, she’ll understand. Devon says she shouldn’t have lied to him, yet he believes her. She vows never to deceive him again and offers to have his sample destroyed. He tells her not to do that if she wants to go ahead. She’s thrilled that he’s willing to commit. This probably means that Simone will break up with him, but he wants to be a father. When Dr. Chasen returns, they tell her that the procedure is going ahead. Hilary goes in for the procedure and it all goes well. She comes out and tells Devon about it and he offers to drive her home, repeating that they are in this together.

More: Kelly Kruger back to Y&R At the ranch, Kyle explains to Victor that Dina’s video confession is everything he promised. He’s confident this is enough to secure what they both want. Victor feels bad for Dina, but he doesn’t believe her story. He needs incontrovertible proof. Kyle prompts him to look at the amendments Jack has made to maintain control. The mustache realizes this is how Jack pushed Ashley out. Kyle continues making his case but Newman refuses to accept this without hard evidence. As Kyle heads for the door, Victor assures him that he’s impressed and wants to see where this will go. Newman refuses to give up the memory stick. At the Abbott house, Jack is making arrangements for the screening over the phone when Abby strolls in. She’s impressed by how much work he’s done for the event. He just wants Dina to feel special so they can all celebrate her life. Abby has been really grateful for this whole process. It has let her get to know her grandmother and it’s been revelatory. She’s glad they have this chance to pass her history down to the rest of the family. Abby points out how much time Kyle and Dina have been spending together. That makes Jack happy. He hopes he can invest in being an Abbott again. Later, Charlie arrives with the film and Kyle follows almost immediately after. He tells Jack how much he’s looking forward to tonight. They watch the video. Jack loves it and weeps. He thanks Charlie for capturing the essence of his mother. He’ll always be grateful for this. Kyle looks around shiftily. After Charlie leaves, Jack thanks Kyle for caring about his grandmother. Kyle says that getting to know his grandmother has proved more meaningful than he expected. Jack is glad they can put their difficulties aside and support one another. Kyle’s hoping for better things in the future too.

The night ends in disaster for the Abbott family.