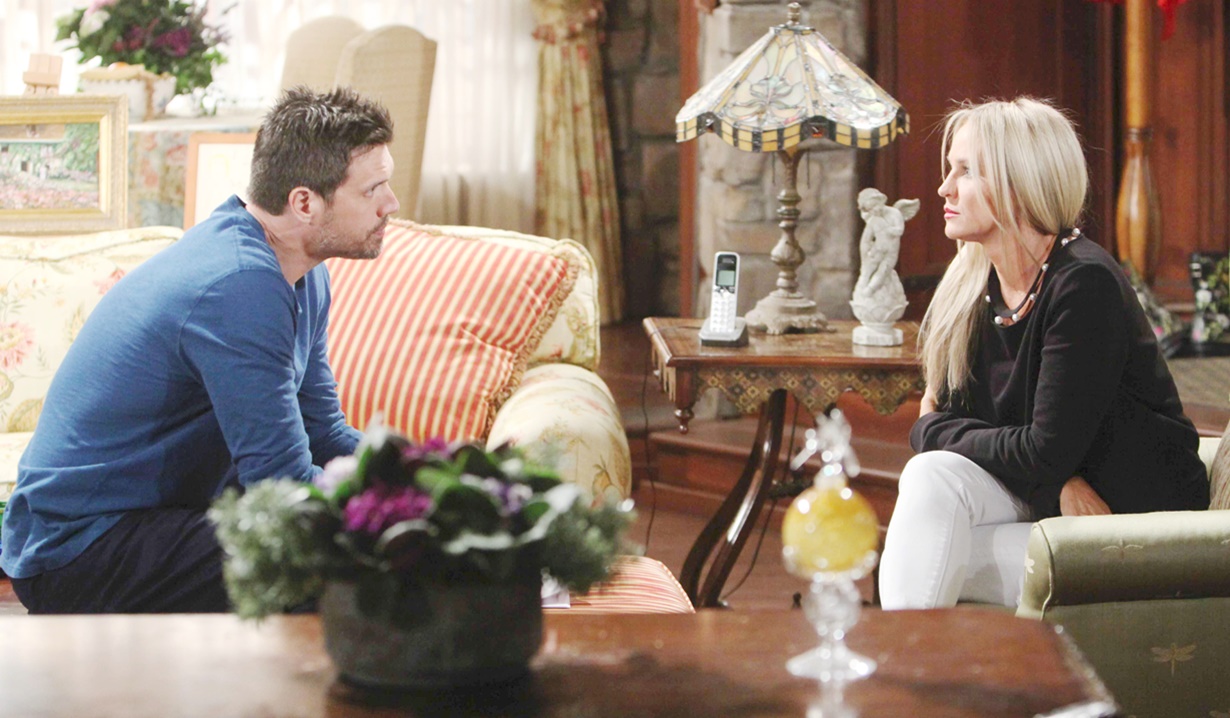 At GC Buzz, Hilary reminds Mariah she’s running the production meeting when she’s at the OB/GYN later. Mariah thinks baby appointments sound like a major time suck. Hilary says it will all be worth it when she and Devon hold their baby.

At the Club, Neil asks after Hilary, and Devon confirms she is staying out of his business as per their arrangement. Neil doubts either of them will stick to it once the baby comes – it will be a whole different ball game. Neil ruminates about the feelings involved and advises Devon he can’t love that child and disrespect its mother. Devon asks if he’s advising him to get back together with Hilary. Neil says it doesn’t matter what he thinks, it’s the two of them in this. He tells Devon it’s on him to step up and do the right thing. Neil is going to love this child and expects nothing but the best for the child, he knows Devon will make that happen. Nick intends to find out what the police are missing, and announces he’s going to canvas Victoria’s neighborhood to see if anyone noticed anything. Sharon learns he’s also downloaded the police scanner app, and thinks he’s obsessed. Why can’t he leave it alone? Nick wonders why she’d expect him to. Sharon argues she’s scared for him since JT’s desperate and dangerous. She implores him to stop this. He promises she has nothing to worry about.

Kyle arrives at the ranch, catching Victor by surprise. He explains he’s not valued at Jabot, and wants to work at Newman. Victor questions if he’s ruthless enough to work with him. Kyle feels he can be more valuable to Victor than his own kids. Nick arrives. Kyle excuses himself. Nick wants Victor’s help finding JT. Vic replies, “Tell me what you need.” After, Kyle makes a speech about Victor not being able to trust Nick with his legacy. Victor points out Kyle’s not family. Kyle wants a chance to use his talent and is up for making tough choices. Victor questions why he should trust him – he spied on him previously. Kyle insists that’s in the past. Victor insists he’ll have to prove himself. Kyle can do that with one sentence – he has information that would take Jack out of the CEO chair at Jabot and give Victor the power to change Jack’s life forever. Victor muses he may have underestimated Kyle, and asks what Jack has done to warrant such betrayal. Kyle says it’s not about betraying Jack, but on securing his own future. The information he has is messy, and will come out eventually, and since it affects him too, all he can do is use it to his advantage. He’ll expect an upper echelon position at Newman. Victor chuckles at Kyle’s ambition. If the information is what he says it is, they have a deal. Kyle pulls out Jabot’s corporate by-laws and the video. Victor notes that if this information is truly explosive, from now on he controls the fates of Kyle and his father.

Nick arrives at GC Buzz and works to convince Hilary and Mariah to put him on their live show. When he mentions reconciling with Victor, Hilary decides she can work with it. On air, Nick talks about the attack on his father and how it put things in perspective. They move on to JT’s disappearance – someone must know something.

At home, Sharon watches Nick’s live appeal for information that will lead them to JT Hellstrom, and offering a reward of $50,000, with horror. When Nick arrives, she’s angry and wonders if he even consulted with the police – he’s given people incentive to make up lies. Nick argues it’s already jogged one person’s memory – Mariah’s. Sharon learns she heard a man and declares she’s just wrong…period. Nick comments on her nightmares, new sisterhood, and nervousness. He demands to know what else happened that night at the house and asks if she’s known all along where he is.

After the broadcast, Hilary leaves GC Buzz hurriedly. Devon arrives and Mariah informs him Hil’s gone to the baby doctor. After, Mariah tells Nick she thinks she heard a man’s voice when she woke up from sleeping it off in the den at Victoria’s house that night.

Devon shows up at the hospital before Hilary’s appointment. He’s concerned about her, apologizes, and wants her to know she’s not in this alone. Hilary is flustered and Devon is taken aback when she asks him to just leave. Devon wants them to be on the same page for their baby and wishes it hadn’t taken him this long to figure it out. Hilary cops to making choices and decisions that weren’t right – the last thing a woman should do if force a man to have a child he doesn’t want. Devon assures her she didn’t force him. Hil just wants a happy, healthy baby. They embrace. Devon insists on staying for her appointment.

Check it out! On this day in soaps, May 4, 2007 a pregnant Victoria has abdominal cramping.

Jack talks to Abby about his hopes for Kyle.