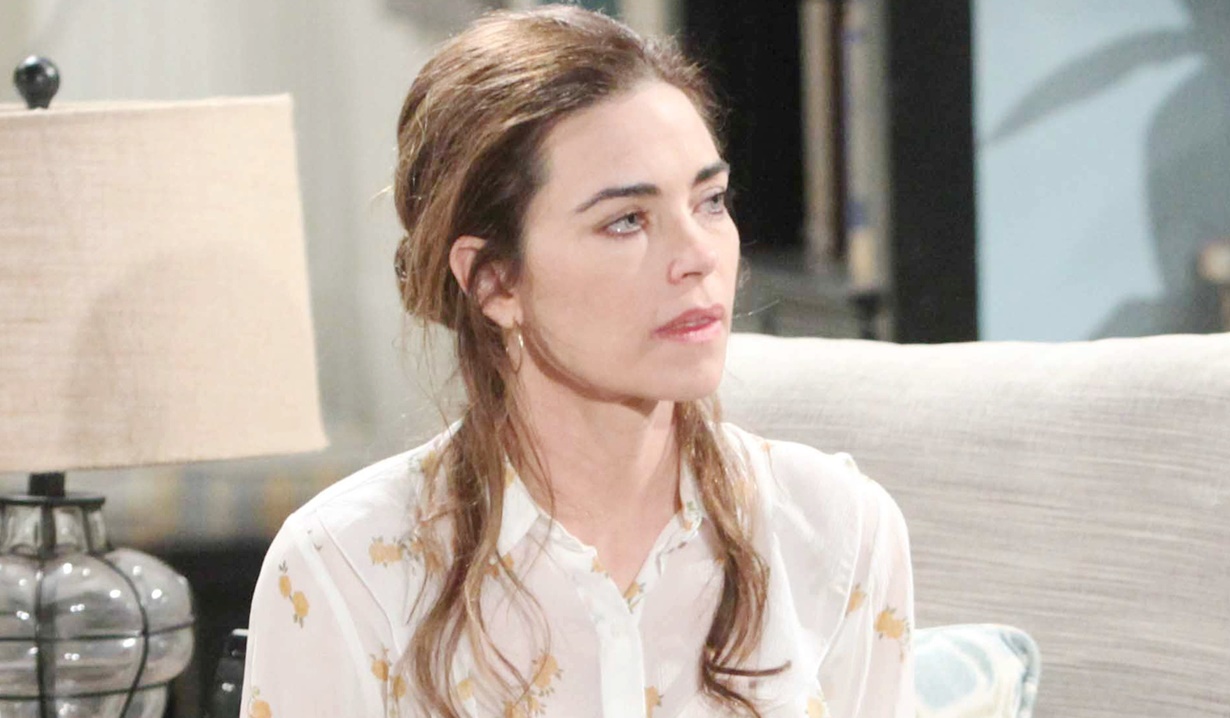 At GC Buzz, Hilary tells Phyllis that Devon has her doing a special episode on his grandmother from Chancellor Park. She wonders how to turn planting a flower garden into scintillating TV. Phyllis suggests she make the episode about Katherine, rather than the flower bed and change the location, but Hilary reports Devon’s set on it. They’re talking about Hilary’s pregnancy issue when Mariah enters. They clam up, and Mariah notes Hilary’s changing moods – she blames it on Devon getting her pregnant as he arrives. Phyllis reassures Hilary before confronting Devon about being rude to her friend. Devon wishes he’d thought about the repercussions before making the deal. Phyllis wonders how long it will take him to admit he still has feelings for Hilary. After, Phyllis urges Hil to make that appointment with her OB/GYN quickly. Hilary calls, but disconnects when Devon approaches. He says, “Take care of yourself,” before leaving. After, Hilary’s doctor calls back to confirm her insemination appointment. The show goes live, dedicated to the topic of secrets and lies. A guy writes in to say he’s lying about not still being in love with his ex. Mariah shares a secret – she got drunk – then wonders what the newly-expectant mother-to-be is hiding, as Devon appears. Hilary opines that sometimes withholding the truth is the kindest thing you can do, but notes one lie leads to more and it spins out-of-control.

At the ranch, Nikki reassures Victoria, who is still questioning her decision to allow Reed to leave. Vikki takes a call from Paul, who wants her to come to the station, citing new evidence in JT’s case. Nikki reassures her they haven’t found JT’s body, but wonders if Sharon talked.

At the station, Paul wonders to Victoria why JT ran after his altercation with Victor – he could have pleaded self-defence. Vikki points out a jury seeing the video of him mistreating her would have convicted him. Paul notes it seems his leaving made things easier for her too. He reveals they triangulated the signal on JT’s cellphone to the vicinity of her house on her girls’ night. Vikki proposes he dropped the phone. Paul says it would still be there and asks if he called or texted her that night. Vikki claims she turned her phone off for the party. She realized later she’d missed communications, but deleted them. Paul buys it, but says there’s one more thing. He recalls finding her in her car that night and questions her not volunteering anything about JT’s abuse. Vikki didn’t want Reed to hear that about his father. Paul wonders if he came by one last time and she helped him run. Vikki lashes out about Paul luring him back to town to investigate her father. Paul feels guilt, but wants the truth from her. Vikki’s told him everything she knows, and exits.

At Sharon’s place, Nick enters and catches Sharon halfway between the kitchen and living room wearing only a bra and panties. She explains herself, and Nick, in a very intense state, mentions his plans for a shower…a cold one. Later, they’re in close proximity again as Sharon pulls a thread off Nick’s sweater. Paul phones her to come to the station. She tells Nick it’s about JT, and he wants to go along.

At the station, Sharon and Nick encounter Nikki and Phyllis. Nick wonders why Paul’s wasting time questioning them about some party. Paul appears – he wants to talk to Sharon first. In his office, he updates her on the cellphone logs and asks if JT came to the house. Sharon, followed by Nikki, and then Phyllis, deny he showed up. Nikki and Phyllis claim Victoria’s phone was off, but Sharon says her phone rang and she didn’t answer. Paul’s interest is piqued. Nick goes in last and is startled to hear JT may have been hanging around that night. He claims he left after Phyllis told him Paul was sending a squad car. Nick wonders if JT’s holed up somewhere in town.

At the ranch, Phyllis, Victoria, Sharon, and Nikki compare the stories they told Paul. They learn Sharon said Victoria’s phone rang. Phyllis wonders if she needs flashcards to keep the story straight. Sharon suggests they explain the discrepancies by saying they were drunk. Phyllis reminds her Nikki’s on the wagon. Talk turns to moving the body. Phyllis wants Nikki to shut down the park for a day. Victoria talks to Nikki alone and feels responsible for dragging them into her mess – she’s going to confess to killing JT.