Monday April 2, 2018: Phyllis and Billy want to help Jack, Ashley worries about a secret, and Hilary and Devon have sex again. 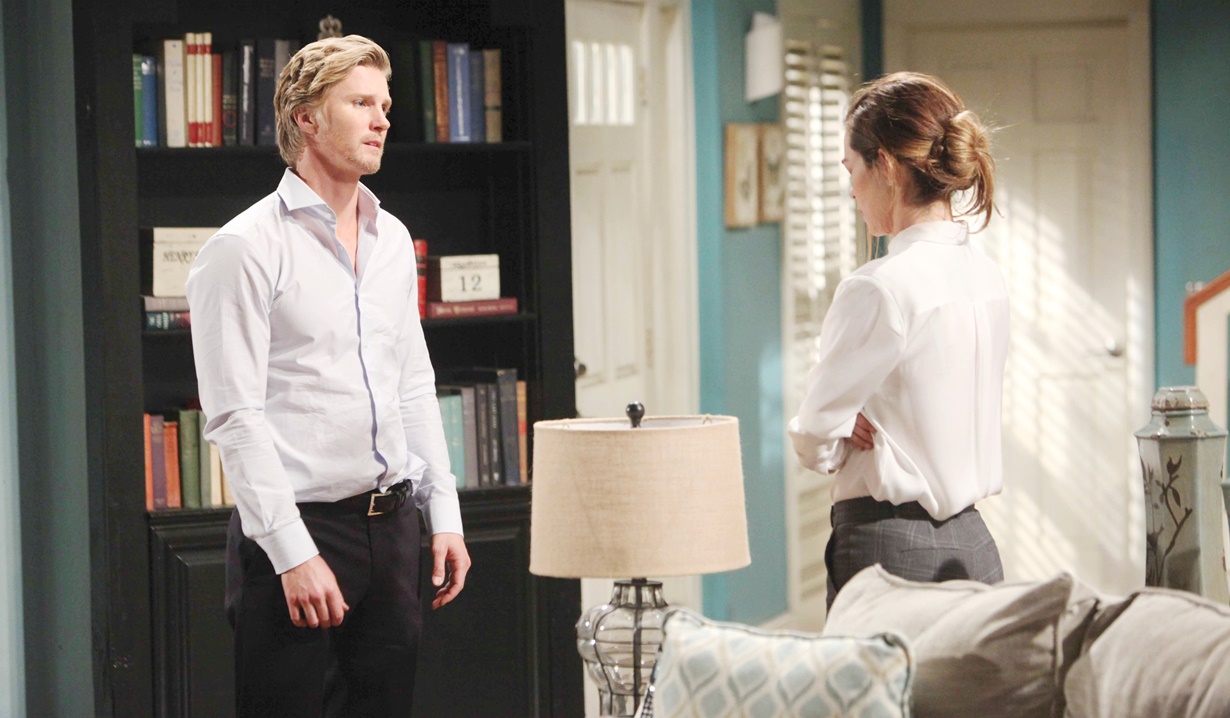 At home, Victoria disconnects with Nikki, and tells JT her dad still has an infection. JT wants to celebrate their engagement, but Vikki reminds him he’s not divorced yet. JT has a plan to remedy that.

Phyllis and Billy visit Jack in lock-up. They complain about the person who did this to Victor – and Jack – still running around. Talk turns to Kyle’s visit. Jack says his son has no use for him at all. With Dina’s Alzheimer’s, and Ashley furious with him, Jack feels he’s losing his whole family. Phyllis vows to find out who attacked Victor. Billy wants a private investigator so Phyllis isn’t in danger. Phyllis won’t let anyone get away with keeping Jack in there.

At the Abbott house, Ashley tells Abby they now know that Jack isn’t John Abbott’s biological son, and have to figure out what to do with that fact. They debate, and Ashley reminds Abby they don’t even know who his father is. She explains John was more than a father to Jack, he was a benchmark. She worries they should keep this a secret forever. Abby thinks Jack will now have to face what he did with the clause. Ashley doesn’t want to do it, even though Jack did it to her. It would rock the Abbott world.

In the Club suite, Devon awakens and turns over. Hilary smiles and says, “Good morning.” They rehash that they had sex because of the missed appointment. He worries about kissing her. Hilary says they kissed because it comes natural. Room service arrives with an omelet and Hil offers to share. In Hamilton-Winters, Mariah questions Lily if she’s okay with what she did after locking Hilary in the office. Lily admits it felt like a fun mission with Cane. Mariah points out Lily acted more like Hilary than herself. Mariah defends Hilary’s plan to become a mother, and insists she and Devon have a connection. Lily refuses to accept that idea. Suddenly, Mariah and Lily each get a text from Hilary and Devon about running late. Mariah doubts it’s a coincidence. In the dining room, JT offers to give Mac full custody, but he wants visitation rights. Mac wants supervised visits. JT agrees and asks if she’ll sign the divorce papers once they’re drawn up. Mac has one more issue and presses as to why he’s rushing Victoria into marriage. She wants him to admit to being abusive, controlling, and isolating. JT calls her a professional victim. Mac’s worried about Victoria, but agrees to sign the papers. Later, Billy hires an investigator to clear Jack. He begs Phyllis not to get involved. She protests this is different, but Billy points out she’s still trying to protect an ex. Phyllis reminds him he thinks Victoria and JT got engaged too soon. Billy replies, “Touche.”

In the hospital, Victoria updates Abby and Ashley that nothing’s changed with Victor. They notice her engagement ring, and Abby agrees with her not rushing under the circumstances. Talk turns to Jack’s arrest. Victoria remarks that Jack is nothing like his father.

In Crimson Lights, Nick goes over his issues with Victor with Sharon, and assures her he’s looking for a place to live. Sharon clucks that there’s no rush and urges him to eat a bagel. After, Mackenzie drops in. Nick greets her before leaving. Mac asks Sharon if she’s close to Victoria, and fills Sharon in on JT’s abusive behavior. Victoria appears and curtly suggests Mac get home to her children. Mac leaves. Sharon tries to talk to Victoria, who insists she would never let a man abuse her. Sharon suggests a relationship counselor since JT won’t get help.

Abby and Ashley visit Jack in lock-up and reassure him the evidence is circumstantial. Jack isn’t buoyed up. Ash offers to drop her lawsuit. Jack moans about his regrets; Dad would have been utterly disappointed in him.

Nick runs into JT at the Club and congratulates him on his engagement. He jokes if he messes it up he’ll run him out of town himself. At Hamilton-Winters, Lily phones Hilary’s doctor and pretends to be her assistant – she hasn’t set up her next appointment yet. She rants to Mariah about saving Devon from that nasty shrew. In Hilary’s suite, she and Devon have a lighthearted conversation about what their child might be like. Hil gushes their baby will be loved every single day. They hope last night did the trick. Devon learns her ‘window’ is a few days, so suggests they try again to up the chances. They start kissing and fall onto the bed. In the dining room, Billy and Phyllis resolve to put their passion on each other instead of other people, and kiss.

JT arrives home and updates Victoria that Mac will sign the divorce papers – he wants to choose a wedding date. Victoria says, “I can’t marry you, JT.”

Lily gets a shock.

Hilary & Devon Have Sex After Lily...

Kyle Takes Over at Jabot, Leaving...