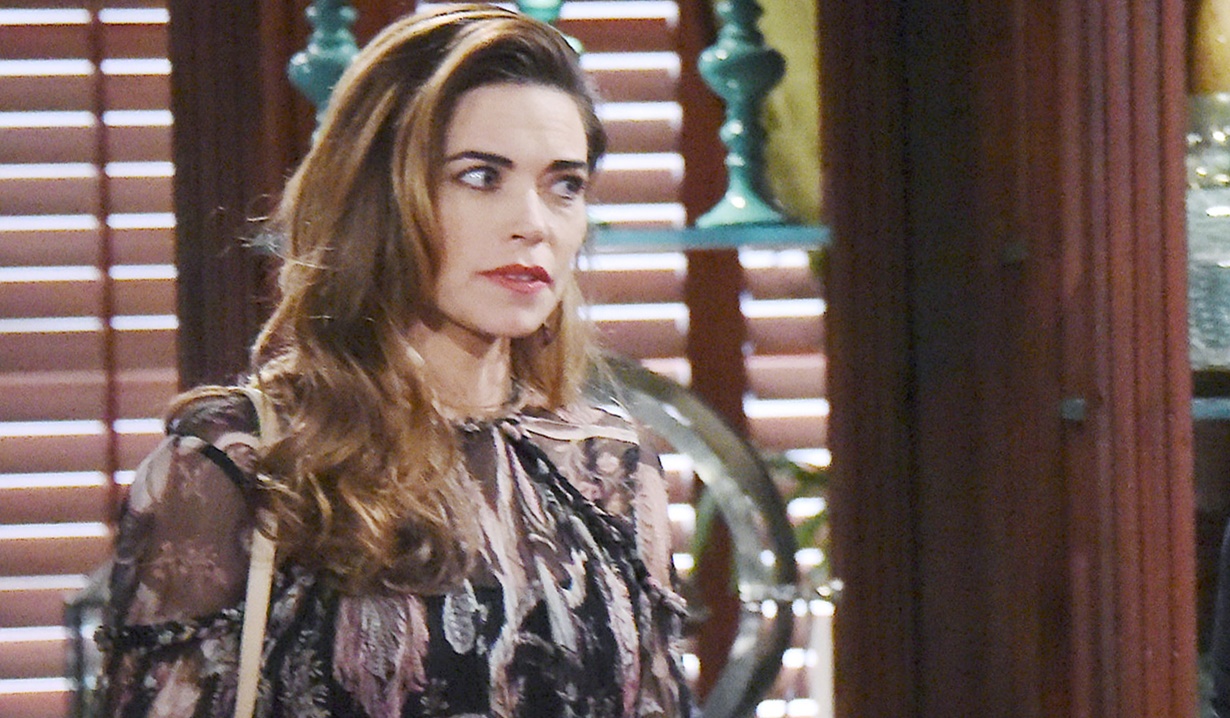 Phyllis arrives at the penthouse, but no one answers the door.

At Sharon’s place, Faith hugs Nick – she’s thrilled he and Christian are moving in. Mariah appears, makes a point of saying this is temporary, and asks Nick where he’ll move next. Sharon interrupts. Nick steps out and Mariah expresses concern to Sharon about the arrangement. Sharon insists she has no expectations, but Mariah’s skeptical; this is dangerous for Sharon and Faith because they lead with their heart. Sharon reassures her and sends her out for Nick’s favorite peach pie. Later, Nick’s phone rings – it’s Phyllis, and Sharon tells Faith to send it to voicemail.

In the Abbott house, Ashley reassures Abby by phone that Dina’s disappearance isn’t her fault. She disconnects and relays to Jack that Dina wandered off when the nurse went to get a porter. Jack worries about how Dina will get help. He glances at his article on the tablet. Ashley gets irked that Jack seems to be blaming Abby. A text comes in from Abby that Dina may have got on another train. Jack panics – she could be anywhere in Europe!

At Newman, Victoria shows Jack’s article to Victor and insists that no one other than Ashley could have leaked the information to him. Vic calls JT to come in as he has an assignment for him. He updates JT on the leak and warns Ashley should not get word of this. After, Victoria tells JT she expects him to prove Ashley was behind it. Later, JT reveals there’s no evidence Ashley passed secrets to Jack, and he couldn’t hack into Jabot’s system. He’ll investigate the old-fashioned way. Once alone, Vikki phones Jack to make sure he’s not in his office and to send Gloria home. At Crimson Lights, Phyllis learns from Mariah that Nick and Christian moved out of the penthouse. She guesses he’s at the Club, but Mariah tells her to aim for something less logical and more catastrophic. Phyllis asks, “Sharon’s?”

Jack disconnects from Victoria at home. Ashley rejoins him and wonders if they’re over-reacting about Dina, who still has her phone. Jack becomes emotional recalling Dina’s plea, “Jackie, help me.” Ash tears up and the siblings embrace. They hope someone will help their mother. Jack’s tempted to go to Europe – he’ll do whatever it takes. After, Jack has enlisted a team of investigators to search, and regrets leaving Dina in Abby’s care – they failed. Soon, a video call comes in from Dina, who is with social services in London. Jack and Ashley are flooded with relief. Dina chirps that they look awful and should get some sleep. Jack gets ready and leaves for London.

At home, JT assures Victoria he’ll get in and out of Jabot undetected. They canoodle. Vikki urges him not to go through with it if he has doubts. JT wants champagne and more kisses when he gets back.

Sharon, Nick, and the kids are enjoying a movie when Mariah arrives at home with Phyllis. Faith reveals Sharon had her send Phyllis’ call to voicemail. Sharon tries to get rid of Phyllis, who insists on speaking to Nick alone. Phyllis tells him this is a huge mistake. Nick defends the move. Outside, Phyllis phones Victoria and informs her Nick’s shacked up with Sharon – she’s hoping Vikki can get through to him.

At Jabot, Gloria leaves and JT slips into Jack’s office. As he searches, Gloria returns, having forgotten her reading glasses. She heads into Jack’s office, and JT hides, but she finds her glasses and retreats. JT lifts a fingerprint from Jack’s phone and uses it to open his drawer, which contains the file Ashley gave to Victoria.

At home, JT calls out that he found the file as she predicted he would, but Victoria’s not there. Victoria arrives at Sharon’s to speak to Nick, but doesn’t get anywhere, and agrees to stay for peach pie. She gets a text from JT asking where she is, and takes off. After, Mariah and Faith go upstairs, and Nick watches Sharon hold Christian and sing him a lullaby. Mariah comes downstairs and looks concerned.

At home, Victoria finds JT irritated that she wasn’t there waiting. Vikki apologizes. JT produces the file and Vikki enthuses, “You are amazing!” He’s surprised Jack made the file so easy to find. Later, Victor arrives. Victoria reveals Ashley’s betrayal and tells her father he has no choice but to fire her.

Billy has a confession.