Thursday February 22, 2018: Hilary’s apology doesn’t have the desired result, Sharon is hospitalized, and Phyllis is intent on locating Chelsea. 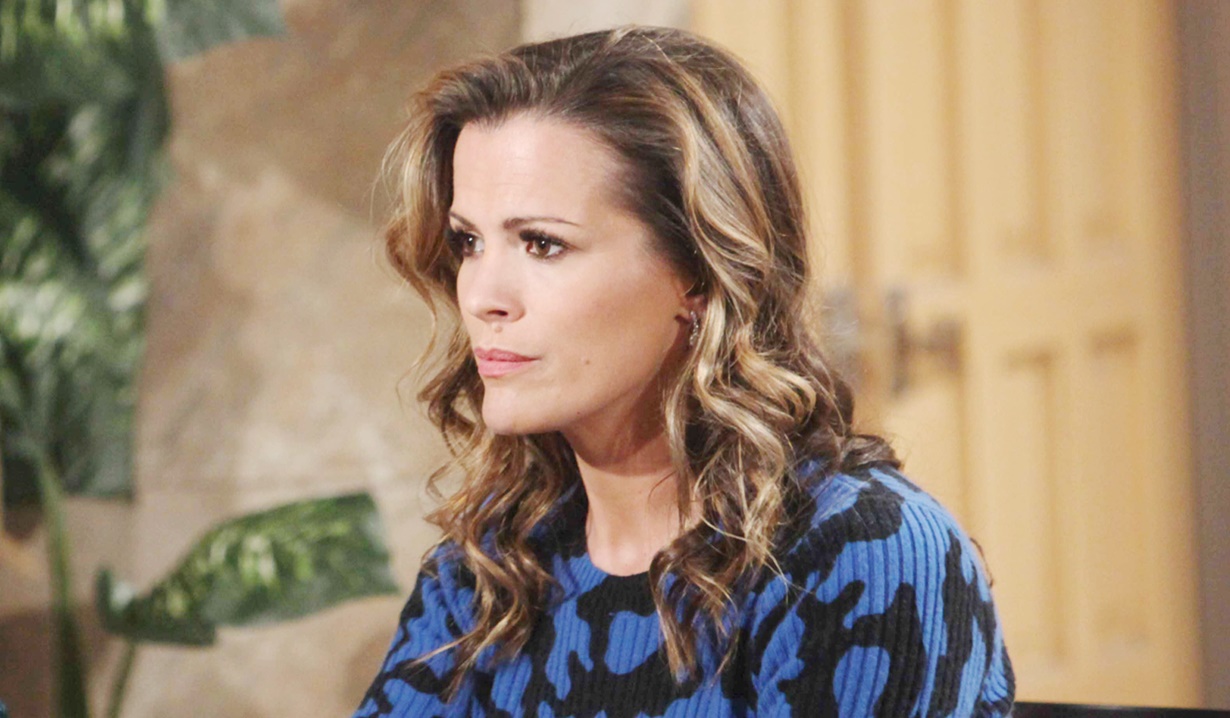 At Crimson Lights, Nick can be heard saying, “Sharon, hello?” as Chelsea disconnects Sharon’s phone off the floor after knocking her out. As Chelsea raids the cash register, Nikki enters the patio, on a tease-y call with Arturo. She spots Sharon on the floor and calls 911. Chelsea hides. Later, Nick arrives as the paramedics take Sharon away. Nikki explains Victor is with the boys, and she found Sharon unconscious.

At home, Phyllis and Billy watch Hilary sign off after her apology. Phyllis is impressed. Billy reveals he was the inspiration for it. Talk turns to Chelsea, but Billy wants tonight to be just about them…GC Buzz and chill.

At GC Buzz, Mariah asks Hilary, “What was that?” Hilary says it’s the new direction they’re taking the show. She checks her phone and Mariah wonders if she’s expecting a call from the person she’s apologizing to. Hilary admits she disappointed the one person she vowed never to let down again. Mariah asks, “What did you do to Devon this time?” After Hilary explains, Mariah, blown away, recalls that she wanted her to cover the story. Hilary counters that Lily deserved to know Cane cheated. She thinks Devon will forgive her, and adds that the apology wasn’t just for him…it was for everyone she wronged.

At the ranch, Victor plays with Connor and Christian, and tells the younger boy, “You look more like your father every day.”

Chelsea enters the penthouse with two suitcases and heads upstairs. When she comes back down, packed, she struggles to write a note for Nick, and starts, “By the time you read this…” At the hospital, Nick tells Nikki they’re trying to stabilize Sharon. Nikki says it wasn’t an accident…the paramedics could tell she’d been hit from behind. Nick wonders who’d want to hurt Sharon. He phones Paul as Sharon is taken for a CT scan.

At GC Buzz, Mariah takes a call from Nick and takes off.

At Top of the Tower, Hilary leaves a message with Tessa as to her location if Devon wants to find her. Phyllis arrives to meet her. She doesn’t think Hilary is despicable, though what she did was despicable. She admires Hilary’s apology and assures her Devon will come around. Hilary learns Phyllis is working with Sharon to bring down Chelsea, and updates her on Mariah’s call – someone attacked Sharon.

Mariah arrives at the hospital seeking answers. Nick and Nikki reveal she’s been unconscious this whole time and Mariah lashes out before crying. Mariah regrets not calling Sharon ‘Mom’ and Nikki reassures her. The doctor appears – the scan was normal, but she doesn’t know when Sharon will wake up. Paul arrives – he thinks it was a robbery as the cash register was open and the cameras disabled. Nick takes a call from Phyllis, who learns Chelsea’s not at the hospital. Mariah thanks Paul, and Nikki prepares to leave. Nick will stay until Sharon wakes up. Mariah goes in to tell her mom she loves her, and appeals to her to wake up. Nick joins them. He tells Sharon he knows something was bothering her and Sharon begins to come around. Nick asks if she remembers who did this to her.

More: Catherine Bach back to Y&R

Chelsea sets Nick’s note on the penthouse table and is about to leave when Phyllis pounds on the door – she knows what she did to Sharon and won’t let her away with it. She warns it’s time to step up; it will sound a lot better coming from her than from Sharon. Phyllis gets the apartment manager to let her in to check on Chelsea, who slips out another door with her suitcases and boards the elevator. In the parking area, she loads the suitcases into her trunk.

Devon greets Hilary at Top of the Tower. She asks what he thought of today’s episode. He complains about her using the show as a forum for her personal issues; it was self-indulgent, and that was the overwhelming response it got from viewers. Hilary is stunned – she put herself out there. Devon adds that she was in breach of her contract and warns her not to do it again. No one is interested in her apologies. Simone arrives and kisses Devon.

At home, Phyllis rants about Chelsea adding assault to her list of crimes. Billy learns that Chelsea lied about being at work to Nick and went to knock Sharon on the noggin’. She adds Chelsea disappeared by the time she got the superintendent to let her into the penthouse. Phyllis worries about what Chelsea will do next…she’s so desperate.

Nikki arrives at the ranch and updates Victor before taking over with the boys. Chelsea rings the doorbell – she’s come to get Connor and Christian.

Sharon's Knocked Out As She’s...

Nick’s World Is Rocked As Chelsea...