JT Signs on for a Side Hustle With Phyllis

Thursday February 1, 2018: Nikki gives Ashley permission to pursue Victor, Lily is romanced by Cane, and Chelsea learns of a problem concerning her line. 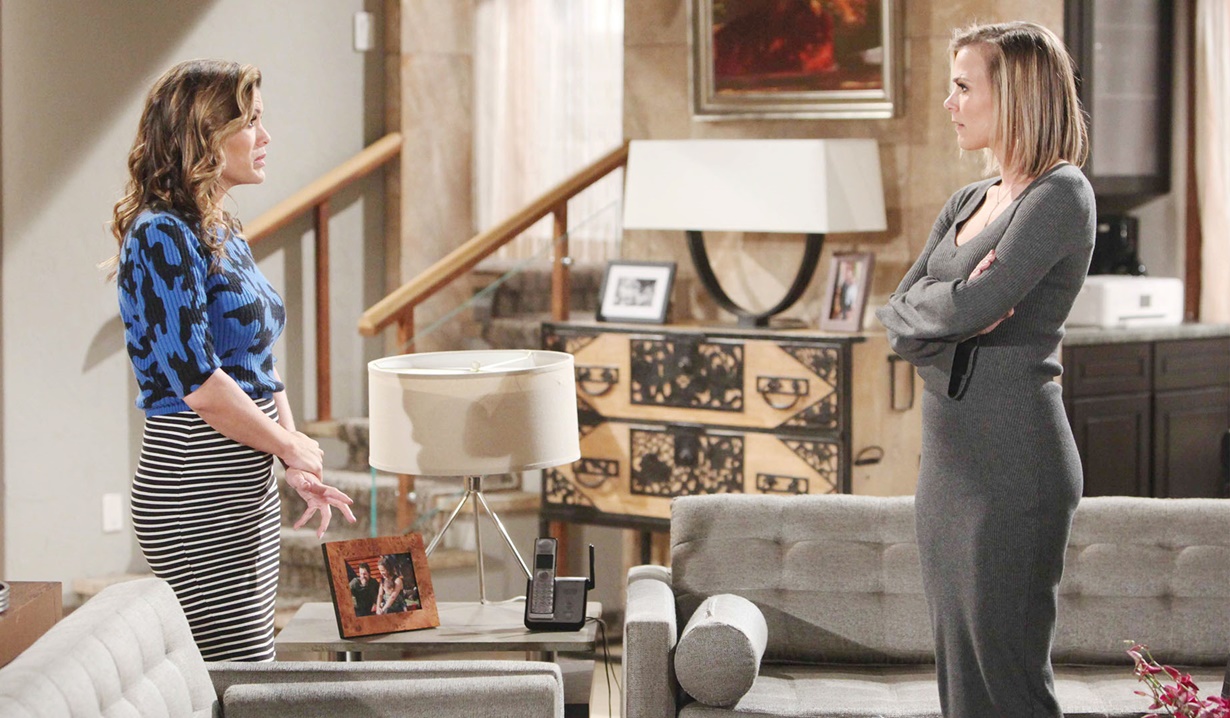 Cane recreates Paris at home for Lily, who misses a call from Ashley while they kiss. Cane, dressed as a French waiter, hands Lily a menu and she invites him to join her. Cane says he’s cleared his schedule and they’ve the house to themselves, so Lily also agrees to stay home for the day. Talk turns to Sam. Lily can’t help but remember how he came into their lives, but says he’s an innocent baby, and adds being there with Cane is perfect.

At the Club, Ashley leaves Lily a voicemail and takes a call from Nikki, who wants to meet to talk.

JT calls out to Reed at home to hurry. They bicker about Reed sleeping in and not doing his homework. Reed snaps that JT doesn’t respect him – they didn’t even tell him they were getting back together. JT thought he’d be happy about getting the family back together. The only family Reed recalls there included Billy. He leaves, and JT leaves Victoria a message about checking in.

At the penthouse, Nick and Chelsea kiss and he asks if she banked that cash. She assures him it’s safe and sound. The doorbell rings – it’s Phyllis with the news about the fraudulent mirror site selling Chelsea 2.0 line. She reveals Hilary brought it to their attention, and they deduce it must be an inside job since it wasn’t a knockoff. Chelsea asks Phyllis to keep her posted. Phyllis assures her they’ll catch the culprit. Later, Nick asks Chelsea why she seems uncomfortable when the found cash is mentioned. Chelsea admits she and Adam used to talk about having a back-up plan. Nick says she can talk to him about anything.

At GC Buzz, Mariah fields a call from Devon, who asks her to come by his office; he’s having an employee meet and greet. Mariah balks, but eventually agrees.

At Crimson Lights, JT phones Cane, who isn’t interested in meeting about work, then texts Victoria, who still hasn’t contacted him. Phyllis notices his frustration and they strike up a conversation. JT opens up about his divorce and Phyllis commiserates before adding that Victoria’s lucky to have him back. She reassures him about Reed also. JT feels she turned his day around, then complains about his work not being fulfilling. Phyllis thinks she can put his skills to use investigating a crime. JT’s reluctant as he works for Cane, but Phyllis will keep the ‘side hustle’ between them. After, Victoria calls, but cannot talk to JT due to a meeting.

At Hamilton-Winters, Devon reveals to Tessa and Mariah that they are the only two he invited – there is too much tension between them and he won’t have that vibe in the office. They have to talk and fix this. Once alone, Tessa apologizes for stealing her words from her journal – she could not have been more wrong – but thinks they wrote a great song together. Mariah can’t trust her. Tessa would do anything to repair that and proposes they start over. Mariah concedes she could never hate her. In the dining room, Ashley runs into Lily, who is being treated to a spa day by Cane. Ash updates her that she’s established at Newman and making radical changes at Brash & Sassy to blow away the competitors. She wants the world to see what Jack lost. Lily learns Ashley plans to utilize her in ways Victoria never would have. Nikki appears, so Lily excuses herself. Ash figures Nikki has rethought her working with Victor, but Nikki wants to reassure her she won’t cause trouble for her personally or professionally. Ashley’s taken aback as Nikki explains she and Victor have an ‘arrangement’ and assures Ash she can get as close to Victor as she wants. Ashley has no interest in rekindling anything with Victor, though Nikki insists if she changes her mind, it’s okay by her. Up at Hamilton-Winters, Tessa tells Devon things are better with her and Mariah.

At home, Cane has a massage table set up for Lily and acts as her masseuse. They end up kissing passionately. Later, Cane gifts her with a bracelet and suggests they renew their vows. Lily agrees – she’ll never stop loving him.

Back at GC Buzz, Mariah listens to Tessa’s song.

Chelsea takes a call at the penthouse from Phyllis, who informs her JT Hellstrom’s on the job, but not to say anything.