Wednesday January 31, 2018: Cane takes Lily on a date, Mariah learns she’ll be working with Tessa, and Lauren gets bad news. 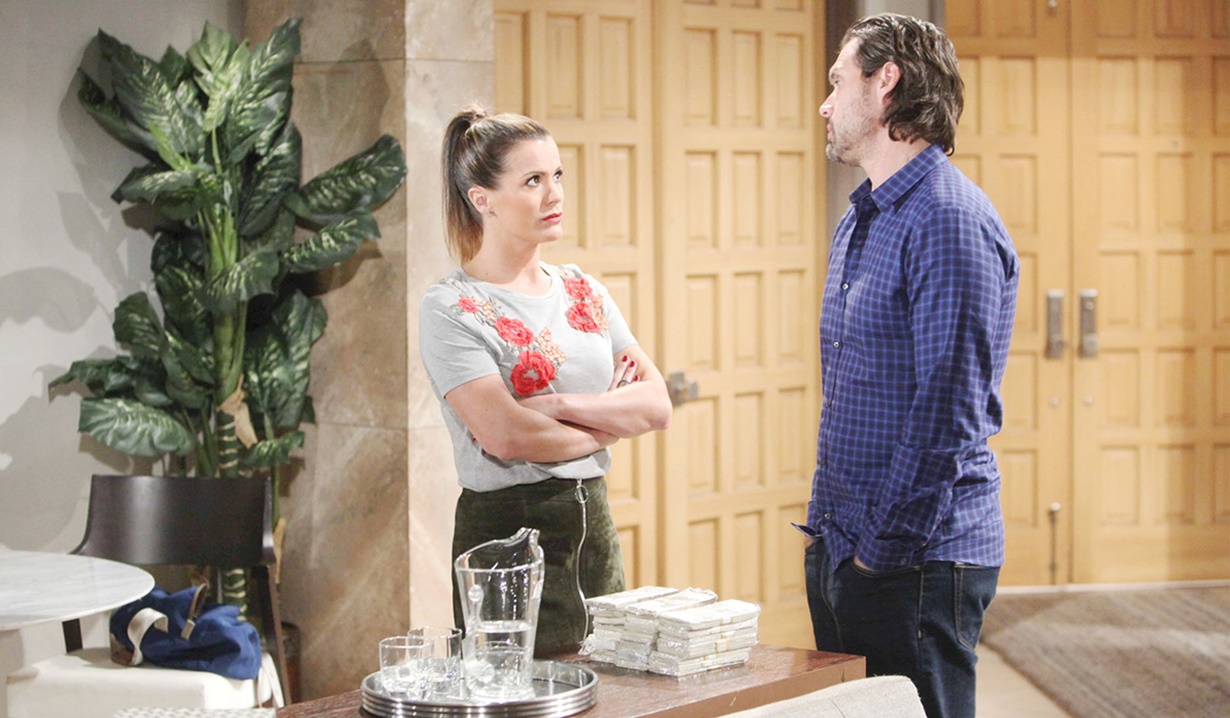 At the penthouse, Chelsea tells Nick she’s planned a ‘do-it-yourself’ lesson for him with a contractor named Mark. Noah arrives and Nick has Chelsea push back his lesson. Noah opens up about being a chump too often…not just in his love life, but also in his career. Nick expresses hope he’ll find his passion. Talk turns back to Tessa. Nick advises if you don’t have trust, you don’t have anything, as Chelsea reappears. Nick leaves with Noah, and Chelsea shoves the stacks of cash into a bag and exits.

Lily arrives at home to find Cane needs someone to watch Sam due to an emergency meeting. She urges him to go. Once alone, Lily tells Sam, “We’ll be just fine.” At GC Buzz, Mariah grills Hilary as to whether she sold the show. Hilary emerges grumbling about a dress that doesn’t fit and reveals the show does have a new owner. Devon appears. “That would be me.” Mariah pulls Hilary aside to argue against selling to Devon. Hilary realizes she doesn’t want to be around Tessa, but can’t help her. Tessa and Mariah look on as Hilary and Devon sign the contracts.

At Jabot, Phyllis and Lauren pitch Jack on a Fenmore’s Wi-Fi Lounge – they need a cash bump. Jack’s drifts out, saying he’ll get back to them. The women realize he’s still processing Ashley’s defection. Elsewhere, Jack finds Ash packing up and taunts her about running to the enemy. He reminds her not to share Jabot secrets and needles that she can’t go to the top at Newman, which is a family company. Ashley counters that in all the years Victor has known about her true paternity, he has never once used it against her. Jack rejoins Lauren and Phyllis, but Hilary shows up and Jack gives her five minutes. She tells him about the sale of GC Buzz, and he snaps it’s another knife in his back. Hil reminds him he’s still the sponsor and vows her loyalty is to him. In the meantime, Lauren tells Phyllis she’s glad Scott isn’t in a warzone, but hopes he’ll come back one day. When Hilary reappears, she tells Lauren about a problem with a Chelsea 2.0 dress she bought from Fenmore’s online. Ravi gets involved and learns she tried to return it but there was no record of the sale. After, Ravi finds Ashley standing in the lab, reflecting. He’ll miss seeing her every day. Later, he reports to Lauren and Phyllis that Fenmore’s was hacked and a fake site was set-up to sell Chelsea 2.0 knockoffs.

At the Club, Cane watches Lily rocking Sam through his tablet, but when she stops singing and puts him back in the bassinette, he rushes home. Later, Tessa spots Noah with Victor at the bar. Victor recalls Tessa stealing the gun when he learns she and Noah aren’t together anymore. Noah takes off, and Victor warns Tessa never to cross a Newman again. Back up at Hamilton-Winters, Devon notes Tessa’s been working hard. Hilary arrives and Devon pours a champagne toast as Mariah enters. Left to talk, Tessa warns Mariah they have to find a way to move forward. Mariah downs her champagne and exits. Down at the bar, Victor spars with Jack about driving his sister away from Jabot. Jack asks the Mustache to treat Ashley with respect. The men discuss Dina’s condition civilly, as Nick and Ashley observe. He marvels at her decision to join Newman. Nearby, Mariah runs into Noah, and updates him on having to work with Tessa. He says she’s screwed and they laugh. Noah asks her to join him in ‘saving the universe’. She agrees. At Hamilton-Winters, Devon lets Tessa know she can take off, but she declines. He admires Hilary’s ability to make things happen as they sip champagne. Tessa interrupts to grab files.

Cane arrives at home to find Lily handing Sam over to Bridget. He reveals he saw her on the baby cam, then confronts her with the knowledge that she lied about having to work the other night. He feels it’s too much for her. Lily tries to reassure him. Cane wants to make time for them as a couple and asks her on a date.

At the movie theater, Cane and Lily eat popcorn and hold hands. Later, Noah and Mariah take in a movie together.

Back at home, Cane tells Lily that Bridget’s still there, so they should continue their date. In the dark, Chelsea stands in front of the urn vault with Adam’s name on it. She opens it and places the cash inside before closing it up again.

Cane and Lily make a decision.

JT Signs on for a Side Hustle With...