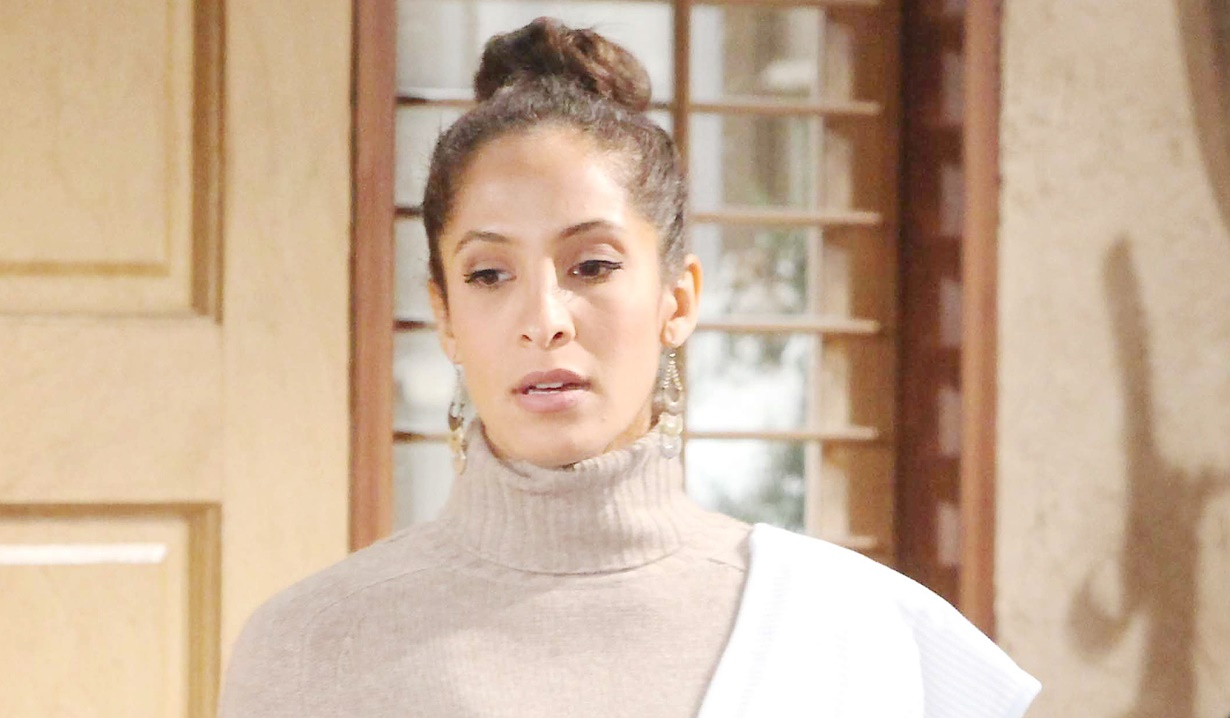 At the Club, Hilary gets a call about her test results and leaves. At Hamilton-Winters, Tessa tells Devon how grateful she is for the job. Noah appears with a box containing Tessa’s belongings. Tessa protests, and Devon informs them they can’t do this in his office. Noah realizes Devon doesn’t know about San Francisco and fills him in. Noah leaves, and Tessa explains to Devon that she and Mariah didn’t plan the kiss. She laments screwing everything up. In the dining room, Ashley crosses paths with Billy and Phyllis, who goes to call Lauren. Ashley and Billy discuss her leaving Jabot. She reveals she’s had an offer from Victor. Billy reacts negatively and Ash reminds him she has a different relationship with the Mustache than he does. Billy advises her to gather ‘intel’ before making her decision, and muses it would sure be a kick in the crotch to Jack.

At home, Cane calls out to Lily to come see Sam, but she has to go to work and will be staying late. Cane offers to spend time with Mattie, but she has to study. Cane presses her to talk, and explains that he’ll do whatever it takes to rebuild the family; she and her mom are worth it. Later, Cane asks her to supervise the nanny while he goes to take Lily to dinner. In the penthouse, Nick vows to have a renovation surprise for Chelsea when she comes home. She’ll be surprised if he’s not passed out on the tile from paint fumes. Once alone, Nick puts on tunes and starts working. At some point, he finds cash in a vent.

At Crimson Lights, Chelsea gifts Sharon with a cookbook, and apologizes for some of the things she said the last time they were together. Sharon reassures her. Chelsea adjourns to the patio, where Hilary appears – she just came from the most amazing doctor’s appointment. Chelsea doesn’t give a damn. Hilary apologizes and assures her she’s different now. Chelsea remarks that people are who they are, the only thing that changes is their ability to hide it, sometimes even from themselves. After, Mariah arrives and notices Devon, who informs her he knows what – and who – the words she wrote were about. Mariah speaks to him candidly about the situation, and Devon is understanding. He wonders if she’ll get together with Tessa, but she assures him that train left the station. Mariah is relieved to keep Devon’s friendship and they hug. Later on, Hilary happens upon Phyllis and Billy and reveals she learned it’s the perfect time for her to get pregnant – she just needs a donor. Billy peruses her list of desirable qualities and quips, “When do we get started?” Phyllis suggests she give it time and let nature take its course. Billy thinks she’s wise. After Hilary goes, Billy and Phyllis each wonder if the other wants a baby. They both deny it, but seem surprised by the topic coming up.

At Newman Enterprises, Lily takes a call from Ashley looking to meet up so she can pick her brain.

Charlie chats with Tessa at Hamilton-Winters, who tells him recording has its ups and downs. Devon returns and Charlie asks for an apprenticeship in the music division. Devon will talk to Lily. Tessa presumes he’ll be her replacement. Devon reassures her. She offers to lock up, then puts her bedroll on the sofa. In the dining room, Ashley wants Lily’s perspective on Newman. Lily warns she doesn’t gossip, but Ashley reveals she left Jabot and has an offer from Victor. Lily thinks Victoria will feel she’s stepping on her toes. Ash wants her kept in the dark until she decides. Lily lets Ashley know she would love to be a part of her team if she joins Newman.

At Newman, Victor tells Cane that Lily can’t be working with Victoria – she’s out of town. Cane phones his wife, who lies that she’s buried in work since Victoria’s relentless. Meanwhile, Ashley enters Victor’s office. He’s been assessing whether they can afford her – turns out they can. Ash makes her demands – a seat on the board and development fund along with the title he suggested. She wants authority over several divisions, including Brash & Sassy. Victor promises he’ll deal with Victoria in a way that will please her. “Do we have a deal?”

Chelsea arrives home, where Nick says the job got complicated and steps aside to reveal stacks of cash found in the vent.

Victor Makes Ashley the Offer of a...