Tuesday January 23, 2018: Phyllis sets Hilary up on a date, Nikki and Victor get news about Victoria, and Sharon puts Tessa on notice. 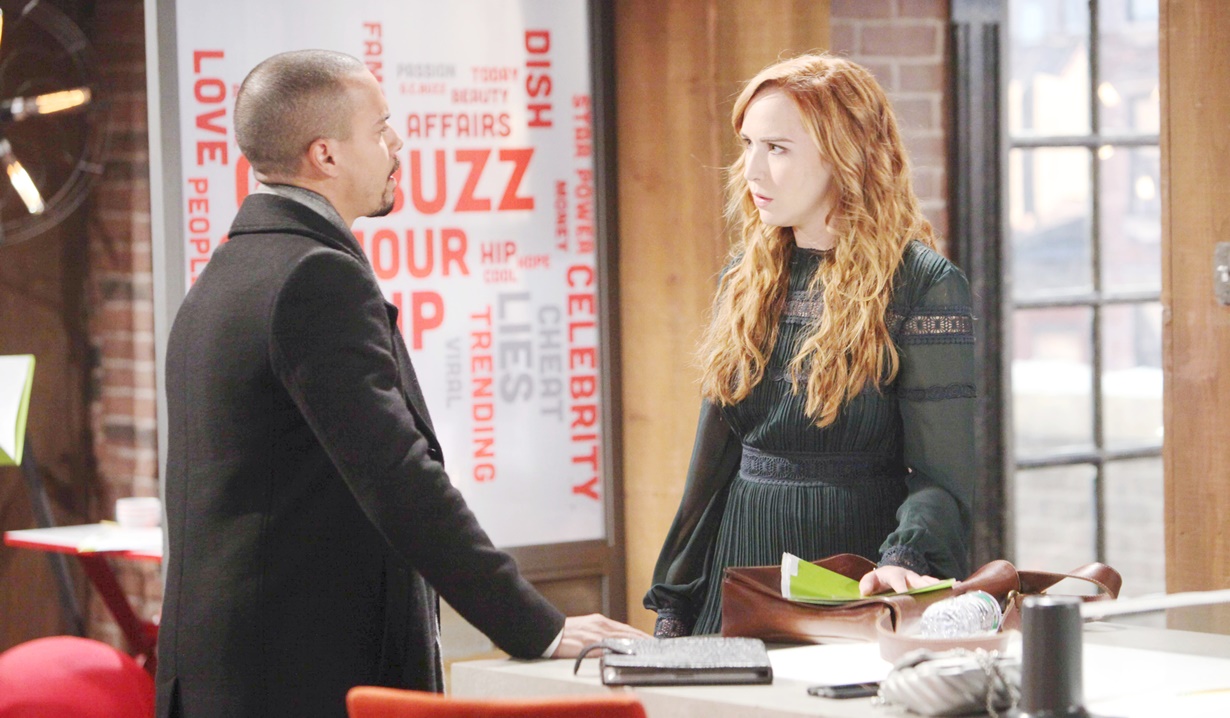 Nick and Chelsea canoodle at the penthouse until he gets a call about a pipe bursting at the building for the homeless.

Billy spins Phyllis around at Jabot – he’s made dinner reservations for them, but she informs him they already have plans. “It’s a double-date.”

In Devon’s office, he tells Tessa she’ll have to do whatever it takes to make things right with Mariah. There’s too much riding on the song to have the bad PR.

At GC Buzz, Hilary admits she’s going on a blind date, and Mariah mocks her for having to be set up. Hilary reminds her she spends her time writing about someone who doesn’t want her – she’s in no position to mock. Later, Tessa approaches Mariah and starts with a denial about taking the journal, but Mariah snaps out the reasons she knows Tessa did it. Tessa eventually admits she read the journal, but insists she just missed Mariah and wanted to know her thoughts. Mariah, emotional, says she betrayed her in the worst way possible. Tessa tears up. She tells Mariah her words inspired her because they could have been her thoughts. Mariah wonders if she still thinks about their kiss. Tessa insists they can’t be together, but asks Mariah to let Devon release the song. Mariah, outraged, storms out as Tessa pleads for her not to mess this up for her.

At the Club, Victoria takes a call from Nikki, then relays to JT that Reed didn’t show up for community service. She worries he’s run away again. Later, Billy and Phyllis arrive, and strike a bet as to how Hilary’s blind date will go. Phyllis bets $200 there will be a second date. Hilary arrives and Phyllis sells the guy she’s setting her up with as a successful executive seeking a serious relationship. Ravi appears. At the table, Billy questions Phyllis’ matchmaking choice, but Ravi manages to impress Hilary. Billy spots Devon and invites him to join them. Devon politely declines. Ravi senses tension, but Hil chirps that she and Devon are have moved on. Devon eyeballs them from the bar. Chelsea arrives next. Billy wants to invite her over. Phyllis threatens to withhold sex. Billy stops by the bar, where Chelsea updates him on Nick’s new project. Billy advises change is hard, and urges her to talk to Nick. Nearby, Hilary tries to tell Phyllis there’s no heat with Ravi, but she urges her to give him another look. At the table, Ravi tells Billy is conscience is clear about Jabot and Brash & Sassy as the girls rejoin them. When it looks like Hilary and Ravi are getting along well, Billy interjects that Hilary wants kids…now. Ravi chokes. Phyllis takes Billy aside, while Ravi informs Hilary he’s not ready to be a dad, and says goodnight. After, Hilary tells Phyllis that Billy made her realize she doesn’t want a man, she wants a baby, and will find a way to make that happen.

Sharon watches as JT finds Reed at Crimson Lights and drags him onto the patio to confront him. Sharon jumps in, and while Reed’s getting his stuff, JT fills her in on the situation. Sharon tries to be encouraging. After, Nick comes in, and they discuss the homeless cause. Nick compliments Sharon’s contribution. Nick goes, and Mariah comes in and opens up to Sharon about Tessa. She doesn’t know what to do about the song. Sharon feels Tessa’s no friend, and advises Mariah not to back down. When Tessa arrives later, Sharon confronts her and warns she’ll watch every move she makes now she knows what she’s capable of.

At home, Reed protests to his parents that his phone died. JT and Victoria break the news that they are back together and want him to come home. Reed gets snarky as the doorbell rings repeatedly – it’s Victor and Nikki. Reed’s sent upstairs, and JT informs the Newmans that he’s moved in and they want Reed back home. Victoria notes they’re in no position to judge people who break up and get back together, and asks for their support. Nikki wishes them well, and Victor goes along, but still wants Reed at the ranch. JT insists they’ll teach Reed right from wrong together. Later, JT takes his medication before Vikki comes downstairs. He assures her everything with Reed will be fine.

Mariah visits Devon’s office and reiterates that Tessa committed plagiarism. Devon notes the lack of proof, and Mariah produces her journal. Devon offers Mariah a co-writing credit, but she orders him to find another song; if he releases it she’ll sue.

Nick arrives home to find Chelsea in seduction mode. They kiss and start to undress.

Hilary gets an offer.

Jack and Ashley Say an Emotional...