Paul Accuses Ashley of Attacking Graham With the Syringe 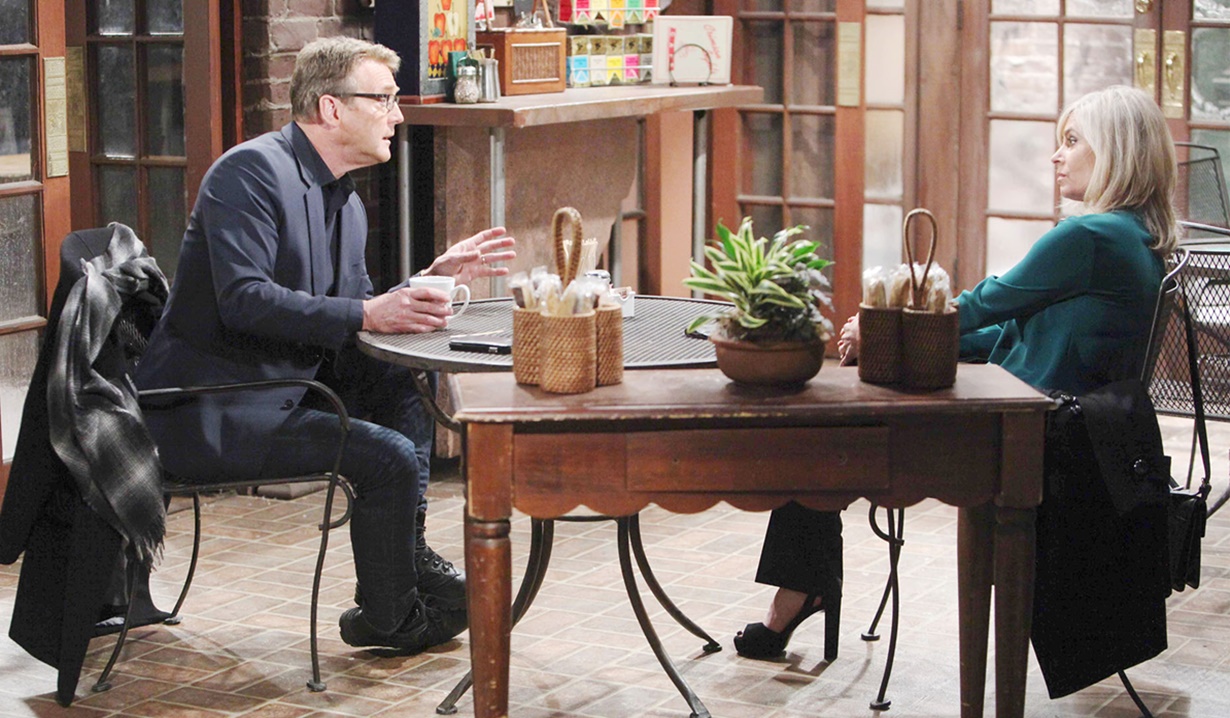 Jack and Ashley arrive at the Club to find Dina’s suite door ajar and Graham on the floor. Ash performs CPR as Jack calls 911. The paramedics arrive and Ashley explains what the compound in the syringe may be as she believes the victim stole it from her lab. Jack adds they think he intended to harm someone with it. The siblings wonder where Dina has gone, and later head out, speculating whether Graham will live. Esther lets Hilary into the Chancellor mansion and snarkily lets her know Cane’s out of the country. Sam cries so Esther rushes upstairs, and tells Hil to see herself out, but she stays. Esther reappears with the baby and resists letting Hilary hold him. Hilary reminds her she’s been Cane’s biggest supporter recently. Esther sniffs that Cane and Lily are getting back together in Paris, and soon Lily will be taking care of Sam. Hilary would like nothing better. Esther sneezes, reveals she has a doctor’s appointment, and is persuaded to let Hilary babysit.

In Paris, Cane and Lily bask in the afterglow of their lovemaking and kiss. They feel they’re starting over, and flash back to their time in Paris years ago when they kissed and exchanged romantic words in French. As they order champagne and strawberries with cream, Cane refers to her as ‘Mrs. Ashby’. They flash to Cane proposing where Dru used to dance, and to him carrying Lily across the threshold of their new home. Lily muses there were so many beautiful memories; how could it have gone so wrong? She’s apologetic for putting a damper on their good time, but Cane reassures her. After they recall Lily’s battle with cancer, she reflects that she has to be sure about reuniting as she’s not sure they can survive something like this again. Cane asks what she’d do differently. Lily flashes to ice skating and relays she’d like to spend more days like that. They remember the times they split and reunited, and talk turns to the twins, and then Sam. Cane asks if she can accept him as part of their family. Lily replies that he’s innocent and deserves all of their love. They agree to accept that they’re not perfect – they are with each other whatever comes.

At Crimson Lights, Mariah searches for her journal. Later, Phyllis admires Sam when Hilary arrives with him. Phyllis teases she didn’t think Hilary would know one end of a baby from the other. Suddenly, Hilary asks, “What was it like?” They sit, and Phyllis fills her in on motherhood. She admits having a newborn is tough, but she’s grateful for the experience. Hilary looks thoughtful. In Devon’s studio, Tessa is making progress on a song when he arrives to check in. She explains the lyrics just came to her but she still needs a hook for the song. Devon senses she’s feeling pressured, and they discuss music being a business. He warns he’s been hearing pitches from other songwriters and she has competition, though he wants her to succeed. Tessa promises he’ll have a song by today. Devon is at Crimson Lights when Tessa phones for him to come hear her song. He spots Mariah, and invites her to join him, but she begs off. After, Sharon senses Mariah is unsettled. On the patio, Phyllis shares her difficult pregnancy with Summer, as Hilary marvels that she went through a lot. Hilary takes a call from Esther and has to go. A woman stops and admires her baby. Hilary smiles. Later, Hilary informs Phyllis she’s decided to have a baby of her own.

Dina surprises Paul in his office – she’s there to turn herself in for the murder of Brent Davis. Jack and Ashley are summoned and Paul reveals he knows about Graham Bloodworth and has questions – not for Dina, but for Ashley. Ash is outraged when Paul reveals her fingerprints were found on the syringe. She and Ashley rail at him about Graham’s motives and how he framed her. Jack takes a call and declares they all have to get to the hospital.

Devon arrives at the studio and Tessa says she’ll let the song speak for itself. She sings a tune that describes Mariah’s feelings surrounding Tessa.

At the hospital, Paul and the Abbotts learn Graham isn’t going to make it – they need permission from his next of kin to remove him from life support. Dina announces she’s his wife and gives her permission.