Mattie’s Court Appearance Leads to a Stiffer Sentence for Reed

Thursday January 11, 2018: Graham is served with an injunction, Sharon helps a homeless family, and an intruder steals from Ashley’s new lab. 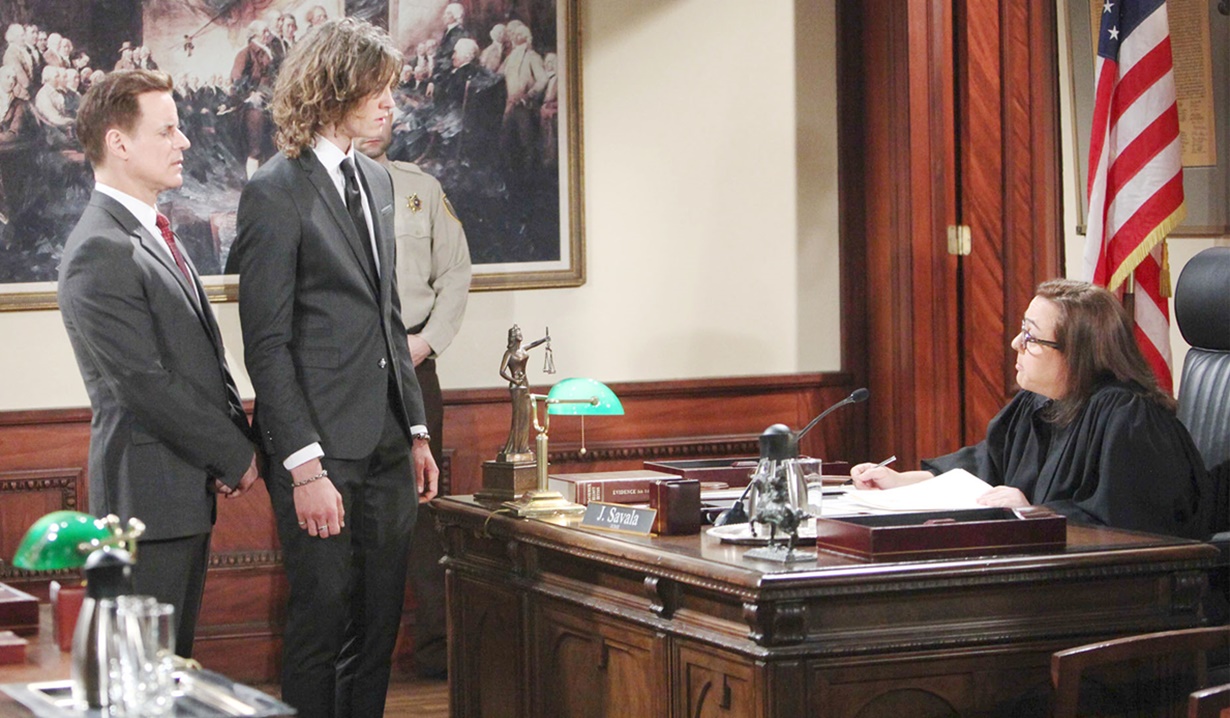 At the Club, Ashley and Michael bang on Graham’s suite door. He opens it slightly and complains his wife is sleeping. Ash and Graham hiss at one another, then Michael presents him with an injunction preventing him from leaving town.

At the Abbott residence, Traci shows Jack a marriage license online that was issued to Graham and Dina after he whisked her away in October. “He is legally married to our mother.” When Ashley and Michael arrive, the lawyer announces he’ll move to have the marriage annulled as Dina’s doctor will testify she wasn’t of sound mind. Ashley worries that Graham will have something else up his sleeve. After, Traci tells Ashley she’s concerned she might not be able to keep her feelings under control. Ash assures her she won’t end up in Fairview and they hug. Jack appears – the lab has been set up at Jabot and will be a good distraction for Ash. His sister reminds him he’s not the CEO and invites him to join her in the lab.

At Victoria’s place, JT apologizes to her for butting heads previously. Vikki tells JT she was going to say the same thing. She calls Reed for court. He appears, looking disheveled, and smirks that he’s not going. He read on a legal website that Michael can enter his plea for him. JT asks Victoria to give them a minute. He informs his son that his behavior is childish and warns about becoming the worst possible version of himself. At Crimson Lights, Mariah and Sharon touch on the ‘I’m Fine’ party; Sharon thinks everyone got the message. As Mariah leaves, Nick arrives. Sharon assures him he’s not in the doghouse and plants a kiss on his cheek. She then updates him on her party, surprised that Chelsea didn’t mention it. They discuss Christian going missing, and the Abbott’s devastation over Dina’s diagnosis. Nick admits he blamed Chelsea and they had a big fight. Sharon reassures him. Nick cautions Sharon as she attempts to help a homeless woman with kids. Kathy doesn’t want her charity. Sharon updates Nick, who thinks she’s looking for a project.

In the Chancellor mansion, Cane reports to Charlie he hasn’t spoken to Lily yet, then tries to help with his math, but refers him to Mattie. Cane asks him to hide her phone and laptop so she doesn’t find out Reed’s DUI hearing’s today. Charlie agrees. Later, Charlie tells an exasperated Cane that Mattie’s not upstairs. In the courtroom, Reed pleads guilty per Michael’s instructions. The judge is about to pass sentence when Mattie busts in wanting to speak. The judge sighs when she insists. Mattie recounts the facts, as Reed angrily protests. Mattie presses on, explaining that Reed was upset that night – she wanted the judge to know. Because Reed tried to stop Mattie from talking to save his butt, the judge ups his community service, imposes a fine, and revokes his license for a year. Reed follows Mattie out and wants to make amends, but she advises him to take a look at himself, adding she didn’t do this so he’d forgive her.

At the lab, Ashley notes the toxic compounds are out of place. She and Jack bicker about the CEO position as she moves vials around. Ash compares him to Graham – a master manipulator who will stop at nothing to get what he wants. Jack’s offended. Later, a person dressed in black with a bag breaks in and steals vials, including the compounds Ashley said were dangerous if placed together.

Back at Victoria’s place, Reed grumbles about his sentence. Victoria wants him to earn the money to pay the fine or sell his guitar. Reed reveals that he’ll never be a real musician anyway – he applied to a music program and was rejected. JT and Vikki are dismayed as he brands himself a loser. Once alone, Vikki worries to JT what trouble Reed might get into without music to focus on. She thinks he should go to a boarding school. JT opposes the idea and assures her they’ll fix this together. He pulls her into a hug and offers to stay longer. Vikki promises she’s fine. After JT goes, Reed sneaks out with his bag and guitar.

Mattie arrives at the Chancellor mansion and tells Cane what she did. He asks if she’s okay. She requests his special Aussie waffles.

Sharon arrives at home with Kathy and her kids. A stunned Mariah learns they’re staying overnight.

At the Abbott mansion, Traci and Jack are discussing Ash when she comes in. Ash announces she’s moving ahead with the arbitration.

Someone seeks revenge on Ashley.

The Abbotts Are Blindsided When...