Wednesday January 10, 2018: Traci and Ashley search for evidence to bring Graham down, Dina makes a confession during an outburst in court, and Jack considers halting the court proceedings. 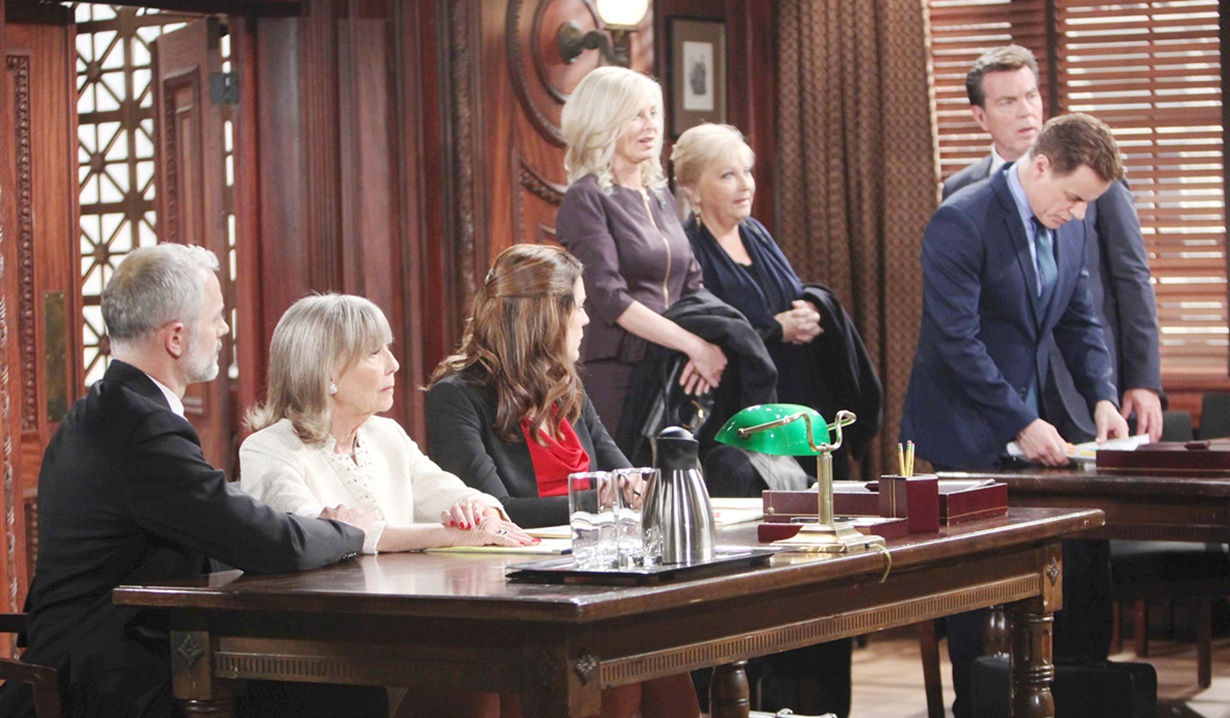 Michael arrives at the Abbott house where Jack is irritated he doesn’t know where his sisters are before court. In the Club, Traci and Ashley tell Mattie they need her Uncle Devon’s help. He’s in a meeting but takes Mattie’s call. Traci and Ashley hope they can find a Mergeron file that will help them derail Graham’s plan. Up in Hamilton-Winters, Mattie gets the Mergeron boxes and leaves the sisters to their search. Traci becomes frustrated after a while, and Ashley tells her to keep at it – she hopes Jack will fight like hell in the meantime.

At the courthouse, Jack rants to Michael about Graham forcing them to exploit Dina’s weakness. Michael assures him it’s their only choice if they’re to keep her safe. Graham arrives with Dina, and sends her inside. Jack lashes out at Graham, who insists she should be there; the case is about her. Jack can’t wait to see the smug look wiped off his face. Graham counters the judge will side with him. Michael stops Jack from lunging at him. After Jack gets air, Michael warns Jack to leave court if Graham baits him. They enter the courtroom, where Dina assumes Jack is John and it’s their divorce hearing. Jack tells Michael they must deal with his mother in her own reality, and orders him to wipe the floor with that bastard. They wonder again at Traci and Ashley’s absence. The hearing gets underway with Michael and Graham’s lawyer giving opening statements. Bloodworth’s lawyer points out Dina’s daughters didn’t show up. Jack takes the stand and recounts how Graham stalked Dina and got her to hire him as a means of seeking revenge, then later kidnapped her after she suffered a heart attack. Under cross-examination, Jack and his sisters’ estranged relationship with Dina is highlighted, as well as the lack of family unity at Jabot. The attorney then details the disturbing incidents Dina has been involved in; the stabbing, the fire, and the abduction of Christian, while under the Abbotts’ care. This sets Jack off, which leads to the judge threatening him with contempt. Dina stands and hollers at the judge to leave ‘John’ alone – she failed him, and had numerous affairs. She wails about leaving her children and says she deserves the worst punishment imaginable. Jack looks like he’s been punched in the gut. The judge calls the lawyers into chambers to decide if they can continue.

At the Club, Traci is set to give up the search when Ashley reveals she’s found something. She just hopes the hearing isn’t over.

In the courtroom, Bloodworth’s lawyer is set to continue, but Michael requests another minute with his client. Jack confides he hates putting his mother through this. Michael tries to downplay the revelation of multiple affairs and says Dina’s outburst may have helped their case. Jack decides he’ll have to concede. Just then, Traci and Ashley arrive and confer with Michael, who informs the judge they’ll proceed and there is new evidence. He submits a manuscript of Dina’s journal in which she describes her feelings as her relationship with Graham began and developed. An excerpt is read in which she gushes over her new friend, Graham, whom she met on a yacht. Another, six months into the relationship, has Dina questioning if his sincerity is all a performance. Later, she no longer trusts him, realizes he’s after her money, and writes that she needs to sever all ties. The journal then indicates that before she had a chance, she was diagnosed with Alzheimer’s. In the next excerpt, Dina wants to see her children and apologize, but has become convinced that Graham is the only one who will look after her and mentions changing her will. The judge adjourns to consider the new evidence. The Abbotts are bursting with confidence as they wait. Michael calls them back in as Graham’s asked to take the stand. Graham testifies that the suit brought against him is a waste of time, then reveals that he and Dina Mergeron are married; making him her next of kin.