Tuesday January 9, 2018: Scott makes a pitch to Devon, JT’s plan backfires, and Lily and Cane get their wires crossed. 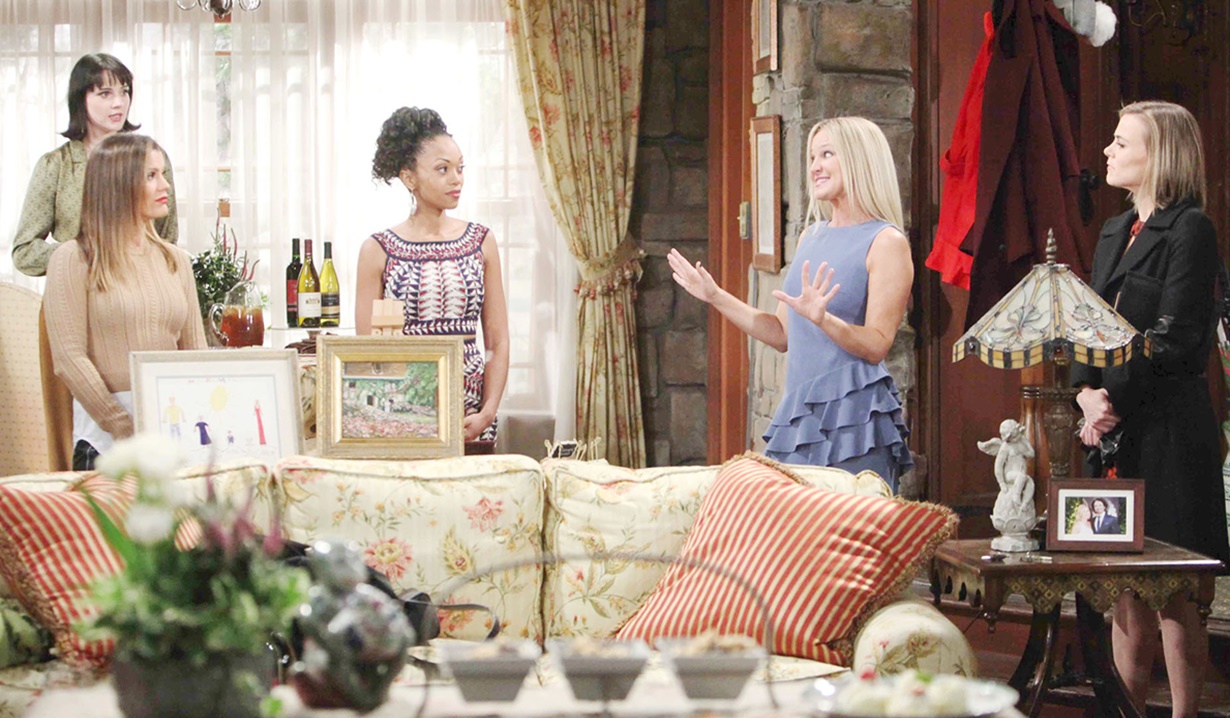 At the Club bar, Victoria and Devon discuss Brash & Sassy branching into Europe and express relief that Abby’s catfight didn’t make the news. Devon notes Hilary’s been taking the high road. Vikki mentions the incident with Graham and Dina, and Devon’s stunned. In the dining room, Phyllis and Hilary talk about Sharon and Abby’s catfight. They glance over at Scott and Hil wonders why they fought over him. “Is it the hair?” After, at Hamilton-Winters, Scott tries to talk Devon into buying Hashtag. Devon wonders if he’s there because Abby wants him out of her face. Scott expects Victor to punish him through the magazine. Devon agrees to consider it.

At the Chancellor mansion, Cane tells the twins that JT is also staying there. Mattie brings up Reed. JT tells her she was brave to call the police. Mattie reveals Reed won’t communicate with her. Cane says if he can’t forgive her, that’s on him. After, JT asks Cane to stop acting like Reed’s some serial killer; kids act out. Cane learns Mac served JT with divorce papers when he delayed his trip back to Washington due to Reed’s DUI. Cane complains about Lily going to Paris and JT says he sounds like an insecure idiot. Cane rushes out. JT texts Reed, who comes over. JT calls Mattie down. Reed accuses her of ruining his life as she defends herself. Charlie intervenes, and Mattie tells Reed she didn’t want to lose him. Reed snarks, “How did that work out for you?”

In the Newman breakroom, Abby tells Lily that Cane deserves to sweat and wait a bit longer, but Lily worries it’s the last chance to save her marriage. In Victoria’s office she informs Devon they intend to keep Hashtag so they can spin things. Devon questions if they can control Scott, and reveals he pitched him. Vikki’s sorry he wasted his time. Devon grins; it’s never a waste to watch her in action. Leaving, Devon spots Lily, and is irked to hear Cane wants her to skip Paris. Later, Scott runs into Abby, who mocks him for trying to sell Hashtag. After Scott goes, Abby tells Victoria she hopes to forget his name in Paris. She meets up with Lily, who explains forgiving Cane is as much about her as it is about him. Abby thinks that makes sense and has a stop to make. Mariah and Chelsea both check in with Sharon at Crimson Lights. Sharon hatches a plan to demonstrate that she’s fine. “I want to have a party!” Mariah and Chelsea look wary, but agree to show up. Once alone, Sharon phones Hilary and invites her in order to get the word out that all is well in her world.

At the Club, Hilary asks Phyllis if she’d like to join her at a party.

At Sharon’s place, Mariah is upset when Tessa arrives for the party. Sharon justifies inviting her, then answers the door to Hilary, and is taken aback she brought Phyllis. Awkwardness ensues when Hilary attempts to make nice with Chelsea. Sharon recaps that Scott cheated on her – she’s celebrating dumping him and moving on. She has her family, friends, and job, and Hilary to spread the good news. Phyllis is surprised when Hilary explains she brought her for healing. Phyllis indicates Sharon. “With her?” Hilary wants them all to find forgiveness, together. Phyllis and Sharon think it’s a bad idea. Hil points out they’re already agreeing. As their relationship is rehashed and the situation deteriorates, Phyllis warns Chelsea to watch Sharon doesn’t get her hooks back into Nick. Hil continues peacemaking as Chelsea scoffs. The doorbell rings – it’s Abby. She wants to speak to Sharon alone, but is invited to say her piece in front of everyone. Abby issues an apology for having sex with Scott, and for Mariah and Faith getting dragged into it. Phyllis points out it’s not all on Abby, and Hilary rejoices, as this pertains to her own history with Sharon. Sharon accepts Abby’s apology, but warns she won’t get an invite to her next party.

At Crimson Lights, JT recaps Reed’s ill-fated meeting with Mattie to Victoria and Michael, who warns about the repercussions Reed’s facing. After Michael goes, JT thinks Victoria’s disappointed Reed won’t go to jail, while she cautions he can’t be their son’s buddy; his laid-back attitude is sending the wrong message. JT counters if she keeps treating him like a bad kid, at some point he’ll stop trying to prove her wrong.

Cane arrives at Newman looking for Lily, who’s not there, and tells Scott he came to ask her something, but he’s got his answer.

At the Chancellor estate, Lily shows up looking for Cane, who’s not there. She tells the twins she’ll miss them.

An Abbott family secret is revealed in court.

JT and Victoria Intervene As Graham...

The Abbotts Are Blindsided When...