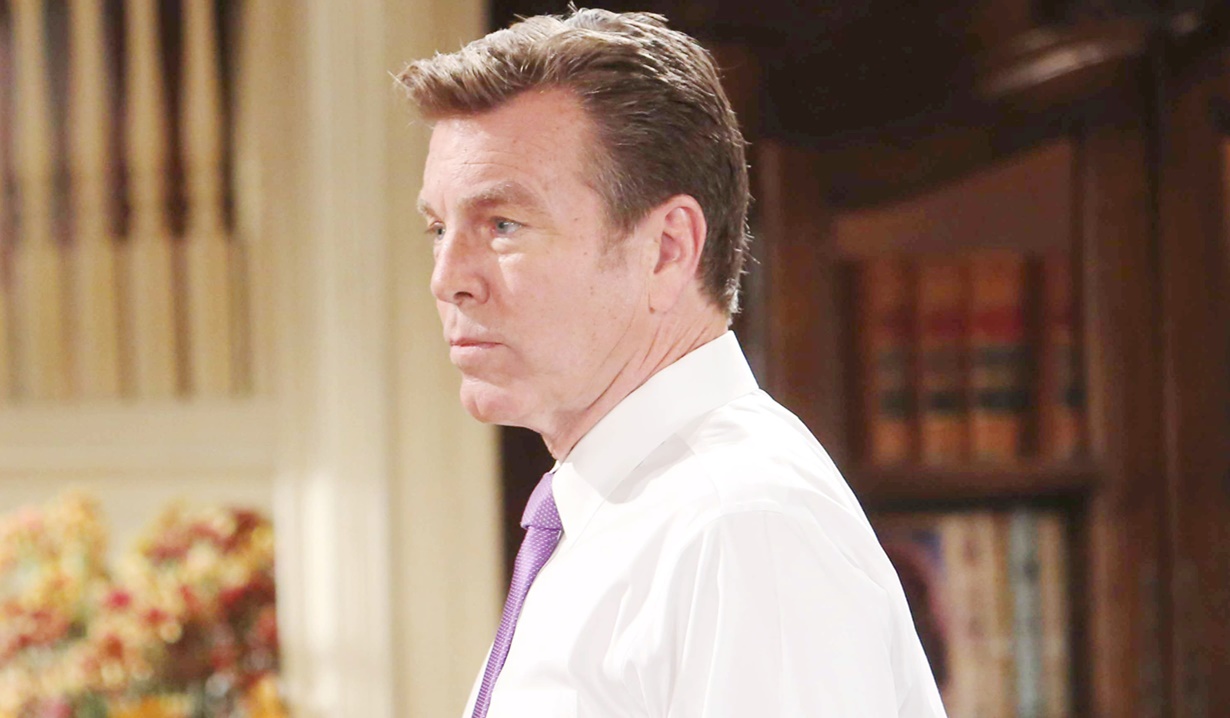 At the Chancellor estate, Cane tries repeatedly to compose a text to Lily about New Year’s Eve and how he still loves her.

In the Club, Lily tries repeatedly to word a text to Cane about New Year’s Eve and her continued feelings for him.

At Billy and Phyllis’ place, she admires his suit and tie as he readies for his first day at work with Cane.

Abby grabs her mace as someone jumps into her car’s passenger seat, but it’s Scott. They rehash Sharon branding her a slut in the Athletic Club when she wasn’t the cheater. Abby surmises he was playing them both and holds up the engagement ring he’d bought Sharon. Scott pleads that he had feelings for both of them. Abby just wants to get on with her job and her life without him in it. Once inside, Newman Enterprises, Scott complains about Victoria putting them on an assignment together. Abby won’t rock the boat – they’ll have to make is work.

At the door of the Abbott house, Ashley and Traci embrace. Inside, the sisters and Jack recap the incident with Christian. Traci’s relieved Nick was understanding once he saw what was going on. Jack warns their mother will be acting increasingly irrational – the next time could be worse. They discuss options. Ashley feels she needs professional care in a facility, but Jack scoffs that she’d be surrounded by strangers. Ash produces a brochure and suggests they present the place as a holiday. Ash and Jack leave Traci in charge to go tour the facility. Dina joins Traci, who is taken aback when her mother doesn’t recognize her and asks her name. Dina recalls the good times with John and the children and asks if Traci has children. Traci tells her about Colleen before turning the conversation to mothers who leave. Dina says leaving doesn’t mean the love is gone. Just then, Graham comes to the door. Dina invites him in as Traci tries to get rid of him. Graham asks to speak to Traci outside.

Billy arrives at the Chancellor mansion, where Cane urges him to just go have some fun – he doesn’t have to pretend to be interested in the business to collect a paycheck. Billy hears the door and assumes it’s Esther, but it’s a sexy young woman. Billy’s introduced to Bridget, Sam’s nanny. Cane has a meeting to attend and doesn’t want Billy accompanying him, but he won’t be dissuaded.

At the Club, Lily eats with Devon, who talks about signing a new artist before bringing up Cane. She admits they’re in a holding pattern. They discuss the issue of Reed and Mattie before Devon goes, and Abby calls offering Lily a trip. Meanwhile, Cane and Billy arrive and bicker their way to a table. Phyllis appears and Cane warns this can’t become a cocktail party. Billy promptly orders drinks. Phyllis notices Cane glancing at Lily and sends Billy to the bar to urge him to pursue his wife. At the same time, Billy advises Lily to tell Cane she loves him and wants him back. Phyllis and Billy meet at the bar and decide their work is done as Cane joins Lily. They admit they are always thinking about one another and Lily suggests they put off the divorce. Cane is relieved. She walks to the door, then stops. Cane puts down his briefcase, goes to her, and they kiss passionately.

At Crimson Lights, Ashley concedes Jack’s right – she can’t bear the idea of dropping Dina at the facility and driving away. They decide on 24/7 live-in care. Suddenly Jack gets a call from Traci that Graham showed up and locked her out of the house.

In the Abbott house, Graham commiserates with Dina about the people taking her ‘Jackie’ from her and flashes to helping her out the back of the Club with the boy. Graham tells Dina she can come with him. When Jack, Ashley, and Traci enter and order Graham out, Dina announces she’ll be leaving the ‘horrid prison’ with him. After Graham hollers about them letting Dina burn down a bar, kidnap a child, and stab Nikki Newman since they’ve been in charge, Jack knees him in the groin and throws him out to Dina’s protests. Outside, Graham hollers that his medical power-of-attorney stands in Wisconsin and he will take Dina away from them legally.

In the Newman elevator, Scott asks Abby about her feelings for him. Abby admits she had them, but then relays that she found a way to postpone their project together – she sold Victoria on an idea and she and Lily are going to Paris.

JT and Victoria Intervene As Graham...