Christian Goes Missing During Abby & Sharon’s Catfight at the Club 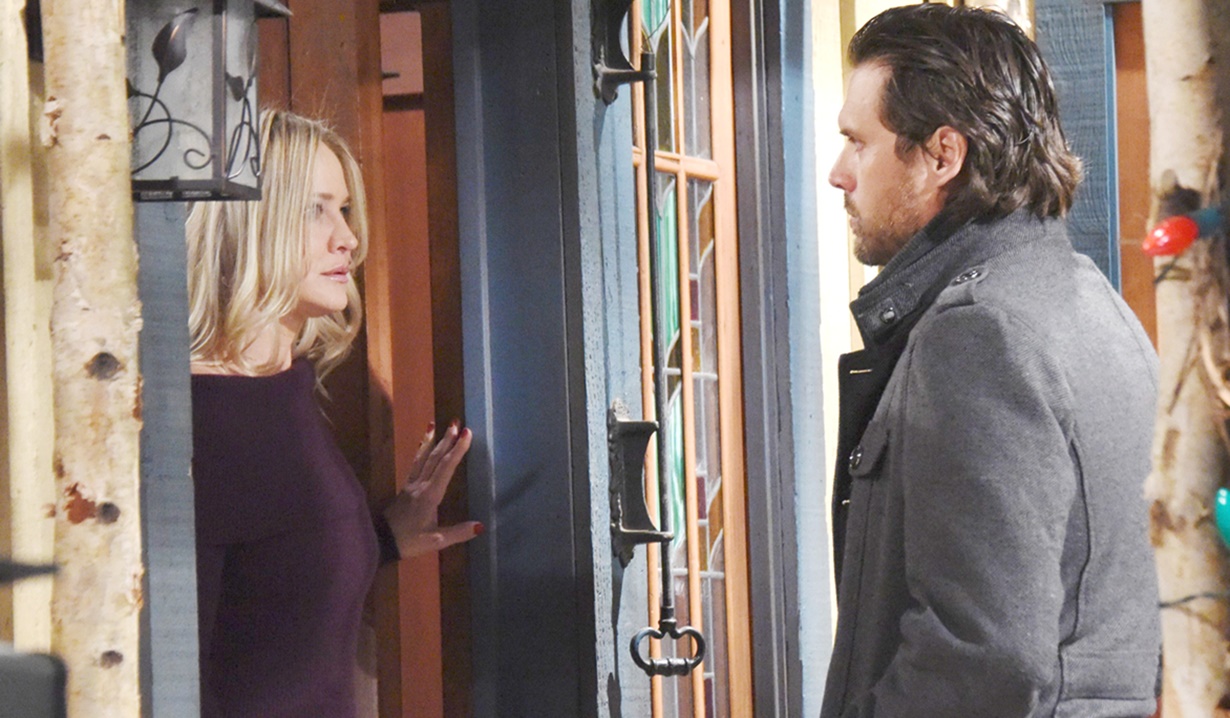 At Sharon’s place, Nick tells her he hates being the messenger but he saw Scott kissing another woman. Sharon asks, “Who?” Nick says that’s not important; Scott’s deceiving her. Sharon rails that Nick never liked Scott, but her ex insists it’s the truth. She wonders why he’s protecting the other woman. Nick urges her to talk to Scott. The next morning, Mariah senses something’s bothering Sharon, who shares what Nick told her. Mariah blurts, “It was Abby.” She fills her in on what Faith saw weeks ago. Sharon reels – apparently her boyfriend’s been kissing Abby Newman all over town. Mariah’s sorry she didn’t come to her; she didn’t want to wreck her happiness. Sharon wonders if Mariah worried she’d become unstable and protests that she doesn’t deserve to be treated this way. Mariah reassures her and they embrace.

In the penthouse, Nick doesn’t regret telling Sharon the truth. Chelsea understands he’s anxious to hear back and warns the cards will fall where they may. Nick has a meeting about Chancellor Park, so Chelsea agrees to take the kids in hopes he’ll be back before her meeting with Lauren. Later, Nick calls to say he won’t be back in time.

At the Abbott mansion, Jack sees off a nurse as Dina chortles, “Good riddance!” Jack complains it’s the third candidate she’s run off. Dina only trusts Jack to look after her…or Graham.

Dina’s thrilled to arrive at Jabot with Jack. He busies her with reports and tells a security guard to keep an eye on her. After, Jack meets with Lauren about going behind his back with Ashley. Lauren agreed he should be available during business hours, and adds she backed him as a buyer for Chancellor. Dina busts in and accuses Lauren of using her body to get Jack, just like her mother pursued John. Jack ushers his mother out, then returns. Outside in the car, Dina tells the driver she wants to make a stop on the way home.

Scott arrives at Crimson Lights, and is puzzled as to Sharon’s whereabouts.

When Scott enters Sharon’s house, the blonde indicates Mariah should leave. Sharon informs Scott she knows about him and Abby. Scott is ashamed. Sharon rants that it’s so obvious now what was going on, but he protests he could barely tolerate Abby – it only happened once. Sharon then learns they didn’t just kiss, but also had sex. Sharon whispers, “You bastard.” She calls him out for cheating and lying; she thought he was a good man! Sharon realizes he showed signs of having issues committing. Scott insists she’s the woman he loves; Abby didn’t mean anything. Sharon hollers that if that were true, he wouldn’t still be kissing her! Sharon, on autopilot, brings a bowl of food out, and when she gets upset about Faith having seen his indiscretion, she dumps it over his head. Once alone, Scott leaves Abby a message that Sharon knows, and he’s coming to find her.

Sharon updates Mariah at the coffeehouse that Scott actually had sex with Abby Newman. Mariah can’t believe he still moved in as though nothing happened and comforts her mother. Sharon has come too far to let this tear her down.

At the Club, Abby updates Lily that Nick must have changed his mind about telling Sharon, and Scott’s not back from his trip yet. She admits kissing him at Christmas was reckless and stupid. After, Lauren meets Chelsea, who has Christian and Connor with her. As they talk, Chelsea’s distracted by the sight of Abby. Sharon arrives and Chelsea remarks to Lauren that she doesn’t look happy. Lauren shrugs that maybe Scott broke up with her, which would be a relief. Sharon approaches Abby and tells her she knows everything. Abby insists it’s over, but Sharon disbelieves that given that neither of them has been truthful until now. Sharon’s voice rises with accusations as Chelsea and Lauren watch, agog. Abby attempts to leave after being called a spoiled, narcissistic bitch, but Sharon stops her. Abby taunts that she looks crazy. Sharon recalls Abby stole Summer’s man too, and Abby counters Sharon only steals babies. Sharon slaps her, and Abby returns the favor. Scott arrives in time to break up a full-on catfight. Nearby, Graham Bloodworth (played by Max Shippee) sips a scotch and watches. Chelsea drags Sharon away as Lauren confronts Scott and Abby. Chelsea turns back to her table and realizes Christian’s not there. As she searches, Scott pushes past his mother and goes after Sharon, who has nothing more to say to him. Chelsea runs up and blurts that Christian’s missing!

Nick and Chelsea fall out over a crisis.

Nick Arrives at Sharon’s Door With...