Tuesday January 2, 2018: Nick confronts Abby, JT gets a new job, and Billy takes on a challenge. 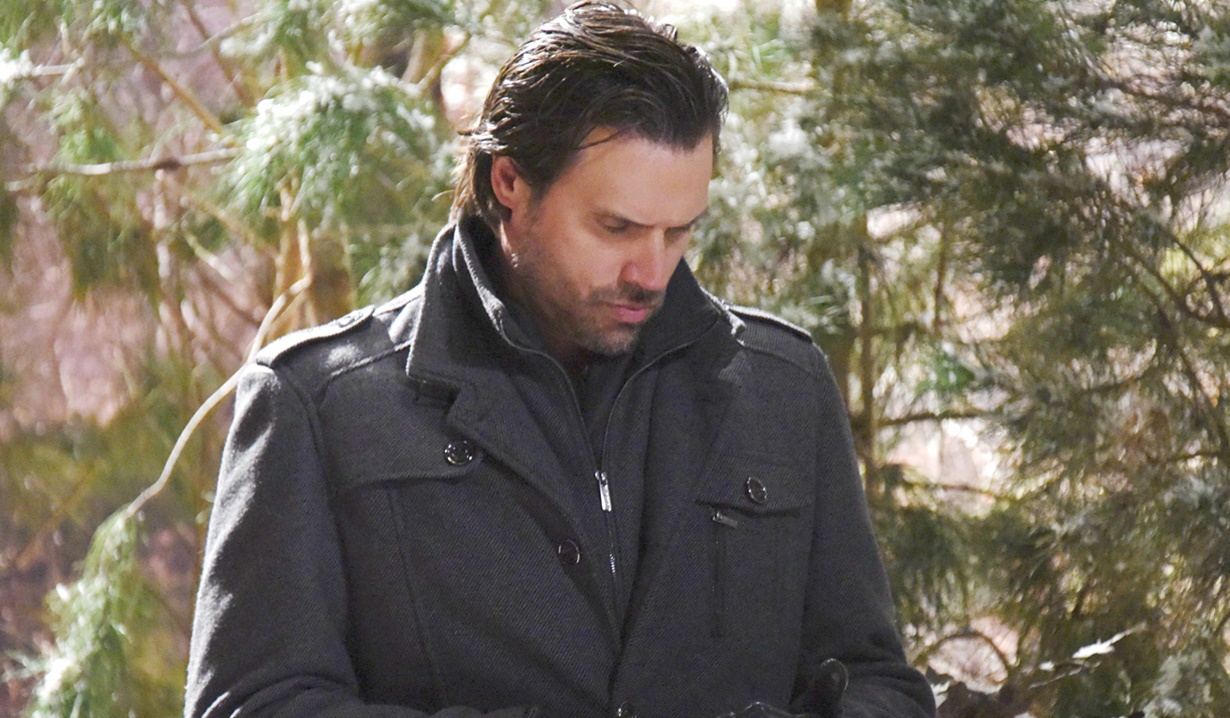 In the Chancellor living room, Cane and Jill discuss her plan to sell the company before she heads back to Australia. He calls her out on setting him and Lily up on New Year’s. Jill accuses him of chickening out of his ‘golden opportunity’. She saw how much he wants Lily back. Cane feels Lily doesn’t want it, and he knows her better than anyone. Jill maintains that they’re nuts about each other and urges him to pursue her or he’ll regret it. After, Cane notices Lily’s scarf and holds it to his face. At the Club bar, JT notes Billy’s drink and mentions Reed’s DUI before snarking, “Thanks for being such a positive influence on my son.” Billy insists he’s been a good role model, but JT again points out he’s drinking his breakfast. Billy counters at least he didn’t let someone die passed out in a snowbank. As their ‘reunion’ continues, Billy confronts JT about taking Reed from Victoria, and JT retorts that they both hurt her, before admitting he and Mac split up. Billy gets a text from Jill and hides. Jill appears and JT points Billy out. Billy retaliates by telling Jill that JT was drinking before noon. After, JT converses with Paul about Reed, who needs to know he messed up. He reflects that he and Billy were just recalling they were guilty of much worse at his age. In the dining room, Jill informs Billy that she can’t stay longer since watching his train wreck life daily is the shortest route to a heart attack. Billy is happy living as he is right now. Jill urges him not to lose his hunger and drive, and he agrees it’s not good to become complacent. Jill decides her legacy could be his legacy. She means Chancellor, and explains Cane has a lot going on personally right now. Billy refuses until she muses, “Think how much it would bug Cane to have you sharing his job with him.”

At the penthouse, Nick is distracted. He worries to Chelsea he should have confronted Grainger after seeing the kiss. Chelsea doesn’t understand why he’s making such a big deal about it. Nick asks if she would want to know the truth. Chelsea remains silent. Nick says, “That’s what I thought.”

At Crimson Lights, Sharon wishes Abby and Lily a Happy New Year as they head to the patio. Abby assures Lily there’s no awkwardness with Sharon since she has no feelings for Scott. They agree heartbreaks will not dictate their new year, but Lily is taken aback when Abby admits she and Scott shared a goodbye kiss. Talk turns to Jill’s New Year’s set-up, and Lily relays that she and Cane had a ‘moment’ at midnight – she could tell the hug was as far as Cane wanted to take it. Inside, Nick greets Sharon, then spots Abby and approaches her. Lily leaves and Nick broaches a conversation about honesty and trust that makes Abby uncomfortable. Sharon appears and Nick makes a point of mentioning Scott. He watches Abby as Sharon chirps happily about him. After Sharon walks away, Nick asks Abby why she’s trying to ruin Sharon and Scott’s relationship. He presses to find out how long it’s been going on. Abby insists it’s over. Nick doesn’t trust Scott and feels Sharon needs to know everything. Abby argues against it, but Nick’s determined to do the right thing. He’ll keep Abby’s name out of it. Abby leaves Scott a message to call her.

JT visits Lily at home. He notes Mattie did the right thing calling the police. Lily wonders about their romance. JT says Cane wasn’t keen on it. Lily remarks it’s one of their many differences. They discuss both of their marital splits and JT’s decision to stay in town. Lily offers to ask Cane to hire JT at Chancellor. Later, Jill stops by and rants to Lily about her and Cane not having the guts to be honest about what they want, before hugging her and leaving.

At the Chancellor mansion, Cane is surprised Lily drove over after missing his call. JT appears and leads Cane to think she came to pitch him for a job. JT’s shown in and Lily leaves with her scarf. After, Cane hires a grateful JT, and invites him to move in. JT’s unsure. Billy enters and announces he’s Cane’s new co-CEO.

Lily returns to Abby’s table at Crimson Lights and talks about Jill’s visit, but Abby interjects with the news about Nick.

Outside Sharon’s place, Nick struggles with whether or not to knock and ignores Abby’s call. Sharon opens the door and Nick says he has something to tell her…about Scott.