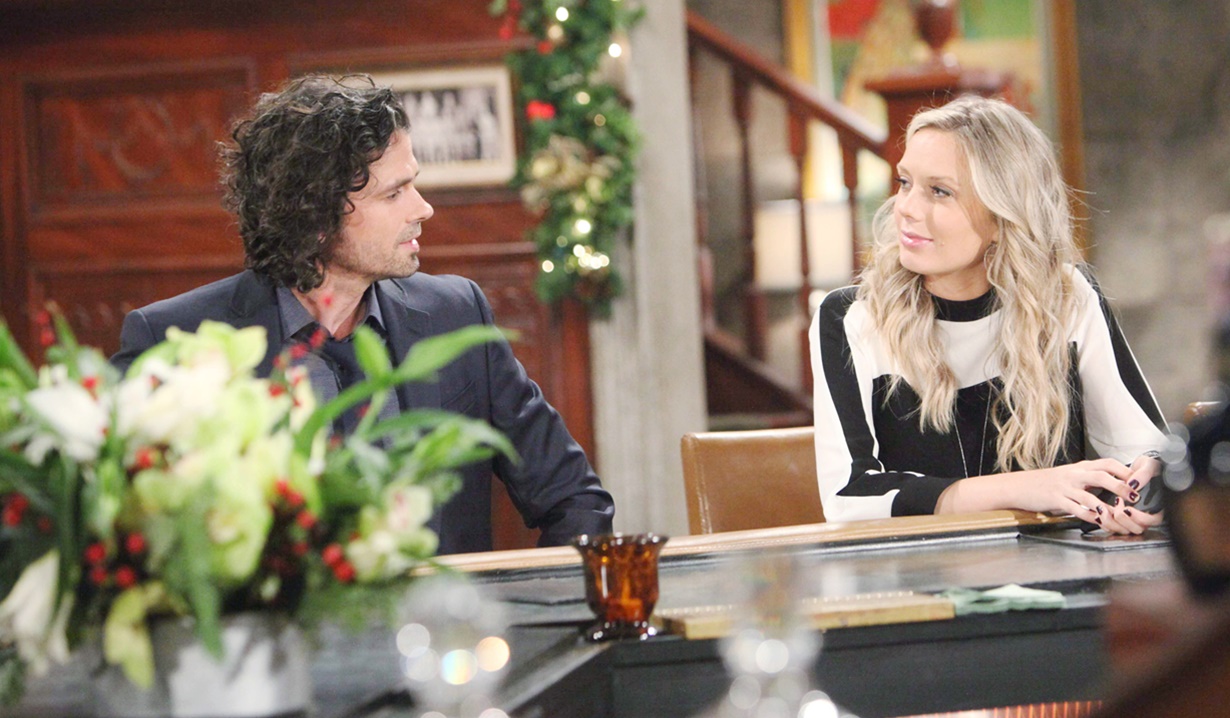 In the penthouse, Nick appears shirtless wearing a tool belt. Chelsea laughingly reminds him he’ll need more clothes for his parents’ event. Chelsea suggests they could stay home. Nick groans that his mom needs him there. She removes his belt and they kiss. At home, Reed protests to Victoria and JT that he wasn’t drunk and doesn’t want another lecture. He intends to go to bed, but Vikki wants him to attend the vow renewal. She phones Nikki at the ranch to update her. Vikki disconnects and returns to dealing with Reed alongside JT. Reed complains they were both arrested and it didn’t ruin their lives.

At the ranch, Nikki elects to keep the news about Reed from Victor, and grabs her purse.

Nikki arrives at Victoria’s house and speaks to Reed alone about alcoholism. Reed insists he doesn’t have a problem, so Nikki tells him she got so drunk she woke up with a stranger two years ago. After, she confers with JT and Victoria. Once alone, JT tells his ex-wife he’s made a decision.

Scott meets Sharon at Crimson Lights to get ready for the Newman event.

At the Club, Abby unsuccessfully lobbies Lily to join her at the vow renewal. Lily was going to invite her to the Chancellor mansion. They toast to not needing men to kiss at midnight. Nearby, Devon learns that Jill’s only guests will be Cane and Lily and warns it could backfire. Jill grins that deviousness is her specialty. Lily and Abby join them. Lily asks Devon to ride with her to the party and he awkwardly declines. After, Devon advises Jill that Hilary might be interested in Cane. At the Chancellor estate, Cane invites Hilary to Jill’s party. Jill arrives and pastes on a smile as Hilary tells her Cane convinced her to join the party tonight. Jill tries unsuccessfully to get rid of Hilary, then sends Cane to check on Sam and fills her in on her ‘party for two’ plan. When Cane returns, Hilary pleads a prior engagement as Jill bundles her out the door.

At the ranch, Abby and Nick compare notes on the vow renewal. Nick snarks that some people don’t respect the concept of commitment as Abby spots Scott and Sharon arriving. Sharon makes nice with Abby. Nearby, Victoria and JT inform Reed that his father will be staying in Genoa City to be there for him. Victor and Nikki call for attention and thank everyone for coming. The vow renewal gets underway and turns surprisingly romantic as Victor muses he was only truly impoverished when Nikki was not by his side; she is his destiny. Nikki resolves to show him they are equals now and notes love means something different to different people. Victor promises they’ll end up more in love than they are right now.

Hilary joins Devon at the Club bar. He remarks that her presence confirms she’s not seeing Cane. Hilary informs Devon that she doesn’t want Cane…at all. “But there is someone I can’t stop thinking about.” Their eyes lock as she calls for champagne. They briefly discuss the big ratings for her new positive show format before Hilary starts gushing about the new guy in her life. Devon chuckles when she finally confides he’s not perfect, he wears a diaper – it’s Sam Ashby. He muses that something else may be going on, but Hilary protests her biological clock’s not ticking. Devon only cares about the countdown to midnight. As they clock strikes twelve he wishes her a Happy New Year and walks off.

Lily arrives at the Chancellor mansion and smiles self-consciously as she and Cane realize no one else is coming. Jill and Esther set out food, snickering, as Cane apologizes. Lily agrees to stay and he pours champagne. They talk about Mattie’s dilemma with Reed, and agree it will be a great year for the twins. The conversation turns to Sam and Cane mentions Hilary can’t get enough of him, which irks Lily. The music changes and Cane pulls Lily into a slow dance. She becomes uncomfortable, but he asks her to stay and ring in the New Year with him. They watch the countdown on TV, and Jill and Esther, watching, are disappointed when they only hug at midnight instead of sharing a kiss. At the ranch, the New Year is rung in, and Victor tells Nick he showed some guts in coming. Nick remarks he’ll suffer through anything for his mother. Sharon tells Scott she’s going to phone the kids and he seeks out Abby. He wishes the best for her in the New Year and she returns the sentiment. They’re unable to part ways without indulging in a passionate kiss. Nick walks in, sees them, and walks back out looking angry.

“Y&R” is pre-empted for NCAA basketball.

Reed Is Arrested for DUI After...