Wednesday December 27 2017: Chelsea rejects Nick’s idea, Jill struggles with whether to sell to Jack, and Lily and Devon question Hilary’s closeness with Cane. 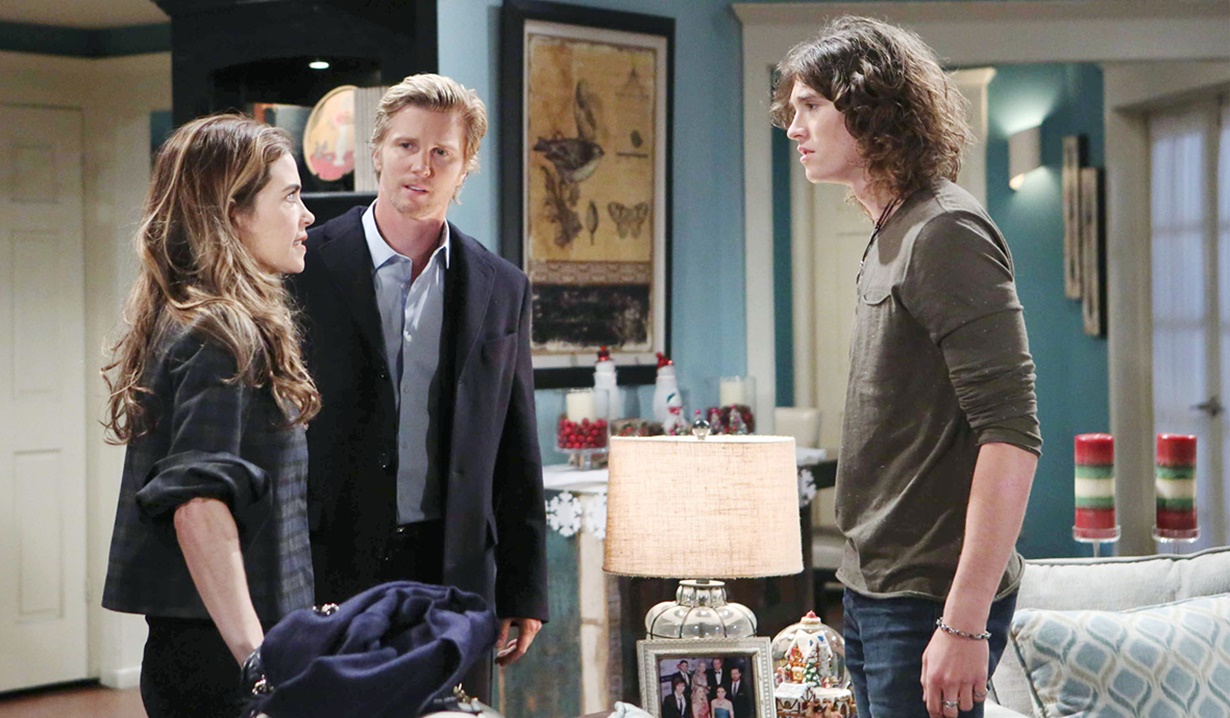 At the Club, Ashley tells Billy she’ll challenge Jack in court. Nearby, Lily talks to Devon about Cane. She says Sam is coming home from the hospital and she’d like to be closer with Cane again, but isn’t sure how it will feel seeing him with a baby that’s not hers. JT stops by Victoria’s to see Reed before leaving town. Victoria asks what’s next for him. JT needs to find a job, and mentions the split with Mac as Reed enters the room. Reed’s shaken by the news, but JT assures him this doesn’t change their relationship. Reed asks for the car and hugs his father goodbye. JT and Victoria discuss relationships over wine. They toast to her high standards and JT reflects that he judged her too harshly. He shares that the situation with Mac is worse than he let on. Vikki urges him to fight.

At the Chancellor mansion, Jill informs Jack his offer for the company wasn’t good enough. Jack thinks the deal has Katherine’s blessing, and asks what else he can bring to the table. Jill produces a counter-offer and her conditions – Cane comes with the company. Jack accepts, but feels the price is hefty. Jill shrugs. “Take it or leave it.” Later, Cane comes home with the baby. The twins are there, and Esther lets Hilary in, followed by Lily and Devon. Lily complains to Cane that Hilary knows more about Sam than she does. Cane replies, “That’s because she asks.” Devon reminds Cane it’s tough for Lily to be there. Mattie gets a text from Reed, who’s having a bad day while Charlie points out Lily’s ‘blood’ connection to Sam. Jill joins Cane and admits she and Jack came to an agreement for Chancellor, but he’ll be kept on. Cane’s skeptical. After, Jill notices Lily confront Hilary about her presence there. Hil snaps that not everyone is as judgmental and unforgiving as she is. Devon updates Jill that Hilary and Cane are friends now. Jill joins Lily, who says she wants to bond with Sam for the sake of the family, but everything is confusing. Jill convinces Lily to attend her New Year’s bash.

At the Abbott mansion, Michael cautions Jack against going ahead with the purchase of Chancellor under the circumstances. Legally there’s no CEO of Jabot – it’s like the Wild West. Jack suggests they ‘cowboy up’ and do the deal.

At the penthouse, Nick tells Chelsea the Underground insurance money came in, before updating her about his parents’ vow renewal. After, Nick announces he wants to build their dream home. Chelsea doesn’t seem thrilled. He wonders what her dream house would have in it. Chelsea reminds him her memories are in the penthouse. Nick accepts this and suggests they make more memories.

At the Club, Billy updates Ashley that Jill texted him – she sold Chancellor to Jack. Ash leaves to kill the deal. At the bar, Lily assures Devon she is fine; she just needs to get over herself. Talk turns to Hilary’s connection to the baby. Lily wonders if she’s making a play for Cane. Devon doesn’t think so, but Lily feels she must be trying to get to her or Devon. Later, Devon asks Hilary if she’s involved with Cane. Hilary wonders if it’s his business who she dates.

Mattie and Charlie meet Reed at a party. Reed relays that his father’s taking off tonight and drinks. Later, Mattie asks Charlie for the car since she doesn’t want Reed driving. He needs the car and suggests a cab. Outside, Mattie warns Reed not to drive or she’ll call the police. Reed snarls that he would never forgive her and drives away. After, Mattie meets Lily and explains what happened – she called 911 and is terrified Reed will break up with her.

At Jabot, Ashley informs Lauren that Jack is acting in his own best interests. Lauren’s open to hearing Ashley’s ideas.

Billy arrives at the Chancellor mansion and tells Jill about the non-confidence vote at Jabot. Cane appears and chimes in with Billy to caution against selling to Jack. Lauren arrives and Jill admits she has reservations about Jack’s capability. Lauren believes in his leadership qualities and advises Jill to go for it. Later, Jill talks to Cane about her party – everyone who matters will be there.

At the Abbott mansion, Ashley informs Jack she has a quorum and he has a decision to make – either he remains Dina’s primary caregiver or he stays on as CEO. Later, Billy arrives and Jack announces he’s found an agency to care for Dina, but Billy says Jill won’t be selling Chancellor to him.

In his car, Reed gets pulled over by the police.

JT is about to leave Victoria’s when she gets the call that Reed has been arrested.

Abby and Scott allow their feelings to take over.