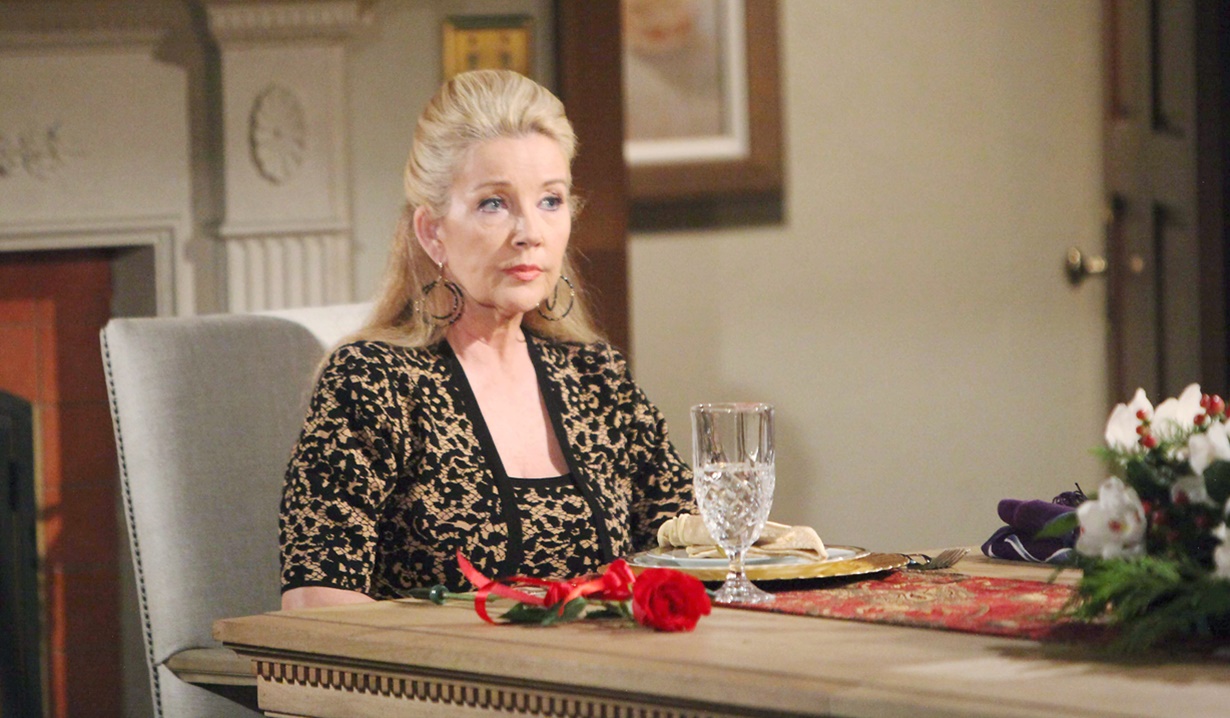 Billy runs into Jack while jogging in the park and remarks on the way he ‘Scrooged’ Ashley. Jack’s not changing his mind. Billy insists this is about doing right by the company and Dina. Jack becomes defensive and rails about Billy choosing to be a screw-up and using any excuse, including the death of his daughter. Billy thinks Jack’s behavior would break their father’s heart; he’d say, “You’re better than this, Jack.” Ashley yells that sometimes you have to take a stand. Traci thought she did by casting a vote. Abby listens as Ashley asks Traci to support her as CEO. Traci can’t support something that’s tearing the family apart, and leaves. Abby assures her mother she’s on her side. Jack appears and Abby leaves. Jack explains he had the amendment added to protect the company from Phyllis when she cheated on him. He never wanted to hurt Ashley, but is fighting for his life. Ashley tells him, “Daddy would be so upset with you.” She warns she’ll fight for her place in the family. Jack slams out. Ashley phones someone – she needs their help. Michael arrives, and is telling Ash he can’t advise her as it’s a conflict of interest, when Jack returns. Michael is sent off and Dina joins the bickering siblings…she thinks it’s Thanksgiving. Jack gets emotional and exits. Dina asks why John was so upset. Ashley tells her that was Jack. Dina talks about holidays bringing the family together; she can’t wait to take the kids to see Santa.

At the penthouse, Victoria and Nick talk about their Christmases. Vikki reveals that JT spent Christmas with her and Reed because he’s separated from Mackenzie. Talk turns to Nikki reconciling with Victor to avoid prison time. Nick learns JT protected Nikki and Victor tricked her. Arguing ensues when Nick accuses Victoria of always defending their father, while she snipes that Nick’s afraid he won’t live up to his expectations.

At the ranch, Nikki informs Victor that Christine and Paul don’t buy their reconciliation and warns they’ll keep investigating him. They agree they need to be more convincing. Victor suggests they get married again on New Year’s Eve. Nikki’s stunned, but quickly warms to the idea and starts the guest list…with Christine and Paul at the top. They enthuse about the image they’ll present to the media, then argue when Nikki insists Nick should be there.

Nikki arrives at the penthouse and fills in an outraged Nick on the vow renewal plans. He says he will do anything to get her out of this. Nikki asks, “Anything?” She works on Nick to attend the nuptials. Nick believes it would cause drama with Victor. Nikki insists it won’t, but Nick would have to hear that out of his father’s own mouth. At Crimson Lights, Victor and Paul spar verbally about the Mustache’s reconciliation with Nikki. Vic chuckles that they’re renewing their vows on New Year’s Eve. Paul won’t attend and add legitimacy to the event given the ongoing investigation. Later, Nikki arrives and Paul urges her not to let Victor suck her back in again. She wants him to be happy for her, but he’s not. Paul warns if their investigation results in charges, she could go to prison as an accessory.

At the Club, Traci tells Billy she was hoping this would be a wonderful Christmas for Dina, but she only sees the situation with Jack and Ashley escalating. Later, Jack joins Traci at a table. They discuss the troubles with Ashley; Jack thinks it will go to court. He reflects on not meaning to hurt Ashley. Traci advises him to make things right. At Newman Enterprises, Victor informs Victoria and Abby that he and Nikki are renewing their vows on New Year’s Eve. Victoria asks, “Does Mom know?” Abby is excited and will change her plans to be there. Victor explains the decision to Victoria. Later, Abby is about to confide in Victoria about the Abbotts, but stops herself. Victoria apologizes for not acknowledging her pain. Abby knows what she did helped the company, though it sucked for her.

Victor arrives at the penthouse and tells Nick he doesn’t want him at the vow renewal, but his sisters and Nikki care about the company, and that is why they’re doing this, as well as for the grandchildren. “Do this for your mother.” They argue about Nick starting all this by trying to sabotage the charity concert. Nick agrees to attend for Nikki’s sake.

At the ranch, Victoria and Nikki discuss the vow renewal. Victoria wonders if she can really go through with it and keep a straight face. Nikki guesses they’ll find out.

Katherine Reaches Out to Nikki As...

Reed Is Arrested for DUI After...