Friday December 22 2017: Charlie plays cupid at Christmas, Hilary and Devon include Jill in a plan, and Paul and Christine pressure Nikki. 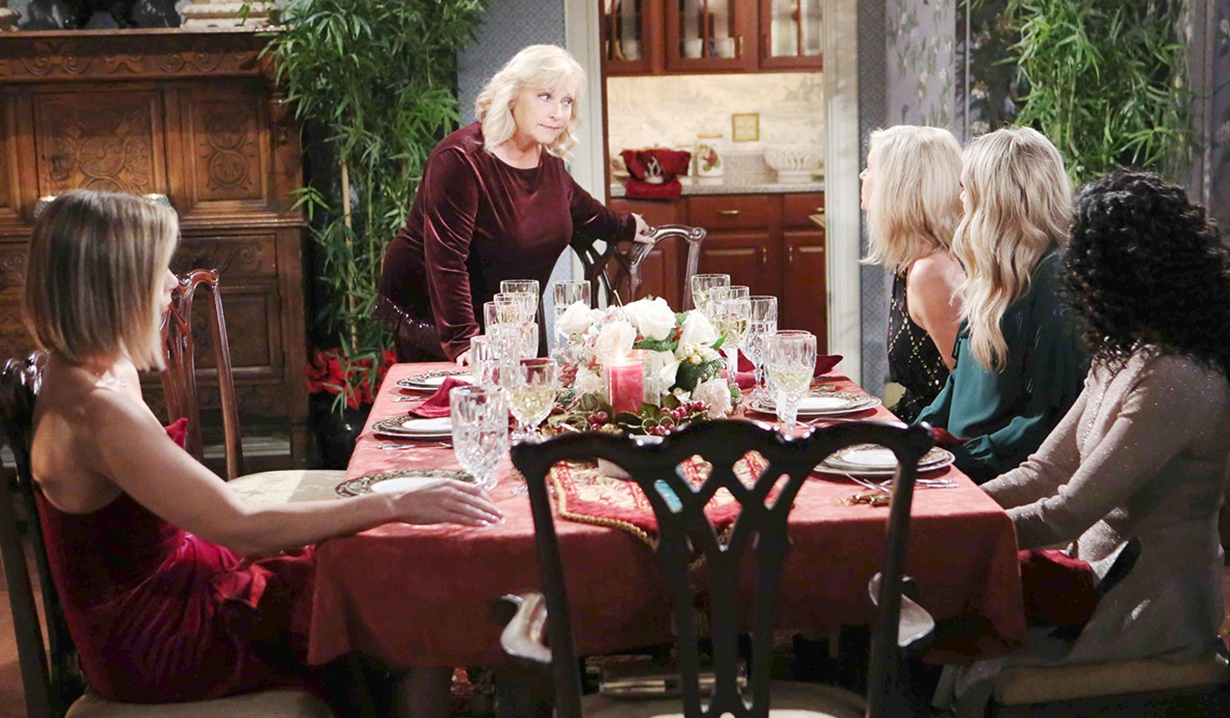 At the Abbott house, Jack comes upon Abby, Ashley, Traci, and Dina discussing Hilary being invited for dinner. After, Jack offers Ashley the head chair since she wants to take over. Ashley wants to leave the Jabot discussion for later. Jack quips, “Whatever you say, Boss.” Ash snaps that they are going to have happiness and joy. Jack chortles, “Ho, ho, ho!”

At the Chancellor mansion, Jill and Esther prepare for Christmas dinner, while Cane tells Charlie he should probably be at the Club with Mattie and Lily. Charlie is right where he wants to be. Jill gets a call from Colin and hands the phone to Cane. Charlie questions Jill about selling Chancellor and Esther overhears and protests. Jill and Esther continue to bicker while Charlie tells Cane he’s got his back.

At the Club, Mattie asks Devon for vegan Christmas dinner while Lily jokingly warns her not to ruin turkey for the rest of them. Once seated, Lily opens a Paris photo book from Charlie, and notes her son is more sweet than subtle. When Devon steps away, Mattie thinks the Paris book made Lily sad, but she reassures her, and advises Mattie to keep an open heart where Cane’s concerned. Mattie’s still angry, but admits she misses him.

Billy runs through the apartment in his underwear, hollering at Phyllis about his dry cleaning. Phyllis appears to locate it in a silky robe. Billy contemplates other options besides dinner and they kiss. Once dressed, Billy tells Phyllis she’s lucky she doesn’t have to go to two dinners like him. At the Top of the Tower, Paul watches Nikki and groans, “This isn’t going to be easy.” Christine responds if they’re going to get Victor, they have to reel Nikki in. They join Nikki at a table and eventually Nikki reveals that things have changed with Victor. Paul and Christine assume she’s returned to him under duress. Paul thinks they could help each other.

Billy joins the gathering at the Chancellor mansion and tells Jill that Phyllis sends her regrets. Charlie gives Cane a gift from Lily – a blue baby blanket with ‘Sam’ on it. Cane didn’t get her anything. Charlie reassures him – the night is young. Later, Jill urges Cane, fondling the blanket, to call Lily.

Hilary arrives at the Abbott house, followed by Phyllis, who says Billy will be along for dessert. Both women compliment Dina, who remarks, “What a delight, strumpets in stereo!” Jack makes another dig at Ashley, and Hilary and Phyllis wonder what they’re doing there. At the table, Dina complains about having to wait. Ash suggests they share memories and Jack vents that he won’t ever forget this Christmas. Dina learns of the vote, and refuses to eat with people who stab her son in the back. Jack leaves the table after her. Traci gets angry with Ashley, and storms off. Ashley then goes, and Abby follows. Later, Dina lucidly discusses the situation at Jabot with Ashley. She advises her daughter to make amends right away, before it’s too late.

At the Club, Lily takes a call from Cane thanking her for the gift. She says Charlie must have bought it and put her name on it. They’re amused, and wish one another a Merry Christmas before disconnecting. Hilary arrives from the Abbott family feud, and conspires at the bar with Devon to ‘spur things along’ for Lily and Cane.

At the Chancellor mansion, Esther wants Billy to take her with him to his next stop. Cane claps Charlie on the back and tells him ‘job well done’, while Jill takes a call and asks, “What did you have in mind?”

Phyllis arrives at Top of the Tower and leaves Billy a message to skip the dessert plan. She spots Jack, who has realized he was petty tonight – it was either that or pull out the big guns on Ashley. Phyllis warns him to think things through and try to have a Merry Christmas. Nearby, Chris and Paul grill Nikki about Victor and offer her immunity if she spies on him. Nikki, furious, ends the conversation. Paul follows and advises Nikki to take this chance to escape Victor for good. Jill arrives at the Club, followed by Esther. Jill says she and Devon had a festive idea. Cane and Charlie appear. Mattie hugs Cane. Lily says, “Merry Christmas again!” Cane replies, “It is now.” Lily and Cane, and Hilary and Devon, stand close and smile as Tessa sings Joy to the World.

At home, Phyllis and Billy decide it doesn’t matter what happens out there, they’ve got this. They wish each other a Merry Christmas.

Jack arrives at home, where Ashley wants to find a way to have a harmonious Christmas. Jack says there isn’t a way and reveals a Jabot amendment he added some time ago – only a blood Abbott can be CEO of Jabot. Ashley hisses, “You bastard!” Jack intones, “You’re not taking my job from me, Ashley. Not ever.”

Victoria and Phyllis put their differences aside.

JT Reveals Split with Mac, and...

Katherine Reaches Out to Nikki As...