Katherine Reaches Out to Nikki As Christmas Comes to Genoa City 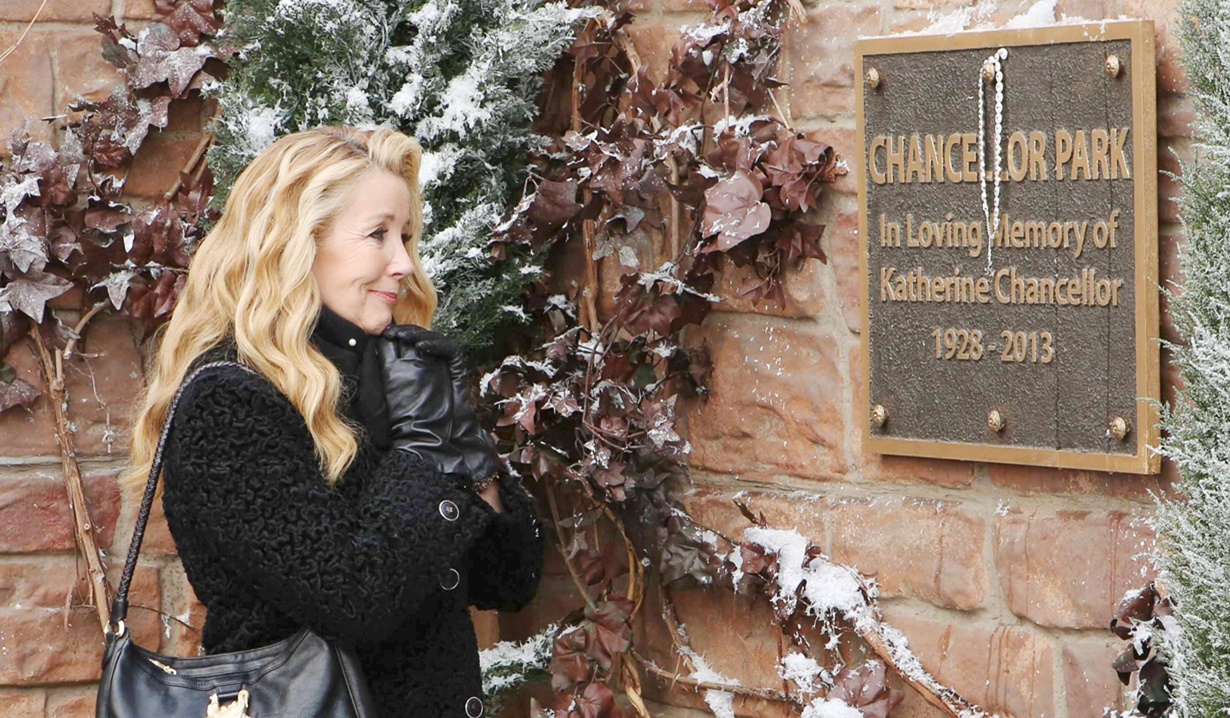 Sharon is teary over Cassie’s stocking at home when Mariah enters. Each realizes they haven’t bought a gift for the other yet and fish for ideas. Sharon leaves, and Mariah phones someone for help.

At Crimson Lights, Faith advises Sharon there must be something Mariah likes as much as she loves ponies.

At the penthouse, Nick vetoes a series of gift ideas for Sharon before telling Mariah her mother will be happy with anything. Later, Sharon and Mariah exchange gifts back at home and dissolve in giggles – they got each other the same red plaid blouse. Mariah also bought a teapot ornament with ‘Mom’ on it. Sharon shares Cassie’s favorite ornament and notes Mariah doesn’t call her ‘Mom’. Mariah reflects that the woman she used to call mom made her dislike the word. Sharon understands. Mariah asks to keep her sister’s ornament. Sharon, moved, agrees. Mariah smiles. “Thanks, Mom.”

What Child Is This…

At Top of the Tower, Hilary hollers for cheerier music. Mariah takes delivery of a gift-wrapped box. Devon looks on as Hilary reveals it’s a gift she bought herself – a red dress. She moves off, leaving Devon and Mariah to reflect on her not getting any gifts. Mariah confides she’s not co-hosting today – punishment for refusing to wear a snowman suit. The Hilary Hour starts with Devon and Hilary reading kids’ letters to Santa. Hilary is shocked by a letter from a child named Annie who asks for pots & pans and a pretty dress for her mom, who goes out to Flannery’s at night. All Annie wants is a happy family. When they cut to commercial, Hilary blurts, “I wrote this letter. This little girl is me.” It turns out Hilary’s former Sunday school teacher kept it and sent it in. Alone, Devon tells Hilary it makes him sad Annie Turner never got her wish. They discuss her mother. Devon assures Hilary there’s nothing wrong with reaching for more. Hil feels so far removed from what that little girl wanted, and thanks him for looking out for her. She invites Mariah to join them as they go live again. Hilary encourages everyone to write a letter and tuck it away. After, Devon tells Hilary she did a lot of good today. Hilary wishes Mariah a Merry Christmas and gives her the beautiful dress. Once alone, Hilary turns over her childhood letter, and begins writing, “Dear Santa…” Later, Hilary spots a Santa hat on the bar and murmurs, “Merry Christmas.”

The Twelve Days of Christmas…

At home, Phyllis coaxes Billy to open his gift – it’s a plastic man on a parachute with ‘Abbott’ written on it. Billy enthuses, “Skydiving!” He frets that Phyllis’ gift didn’t arrive. Phyllis takes a call from Daniel. Billy answers the door to Abby.

In the park, Billy complains to Abby he’s always disappointing people. She thinks growing up is over-rated. They discuss not being related anymore. Billy doesn’t care; they’re family. Abby tells him he just gave her the best gift ever.

At Crimson Lights, Phyllis thanks Victoria for the invitation to join the holiday celebration. Vikki wonders how many gifts Billy’s showered on Phyllis so far, and recalls how he once had a replica of her childhood bookcase commissioned for her. She knows he’s not perfect, but advises Phyllis not to be too hard on him. Phyllis arrives home to Billy still apologizing. She reassures him. Billy baked a ‘Billy loves Phyllis’ chocolate cake. The doorbell rings – it’s Phyllis’ gift, a pear tree. Billy enthuses that he was going to get her all twelve gifts from the song, but it didn’t pan out. Phyllis remarks it’s just as well, she’s not sure how she’d feel about eight maids a milking around him. A pouch on the tree contains five golden rings – one for each finger. Phyllis admires them and kisses Billy. Later, in bed, they eat cake and wish each other a Merry Christmas.

Angels We Have Heard On High… A woman named Kathy mistakes Nikki for a friend in the park cafe, and joins her. Kathy wants to hear about the Nikki and Victor Newman saga, but suddenly has to dash. She tells Nikki to ‘stick to her guns’. After, Nikki realizes the woman stole her purse.

At Crimson Lights, Nikki tells Sharon about the robbery, then spots Kathy on the patio and confronts her. The woman shrugs; she’s homeless, staying at the shelter, and thought Nikki Newman wouldn’t miss a few bucks. Nikki shares that she had hard times too – she won’t call the police. Kathy talks about persevering and mentions the song ‘I’m Gonna Live Until I Die’, which Nikki knows all too well. Kathy talks about being present and open, and Nikki feels she seems older than her years. Later, Sharon says there’s no Kathy at the shelter, and Nikki was sitting alone. Nikki insists the woman was there. Nikki finds a necklace in her purse, engraved ‘KC’, and leaves.

At Chancellor Park, Nikki approaches Katherine’s plaque – she thinks Katherine found a way to reach out and reiterate the advice in her letters. Nikki assures Katherine her town, her park, and her friends are all in good hands; she inspires them every day. Nikki tearfully wishes her a Merry Christmas.

The Abbott Family Feud Peaks With...