JT Reveals Split with Mac, and Victoria Invites Him to Stay 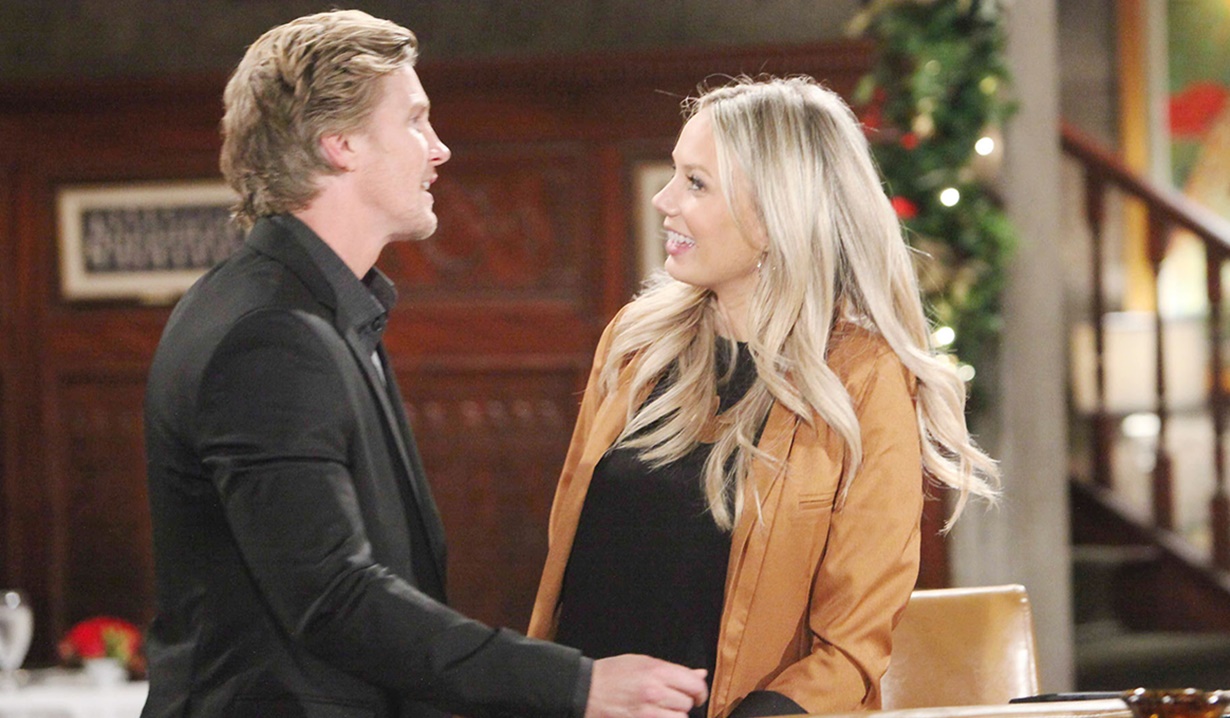 At the ranch, Victor shows Nikki the press release about them. Vic chuckles as Nikki sniffs that the piece makes it sound like they’re about to embark on their next honeymoon. She recaps their arrangement, then talks about convincing family and friends – they need to address that today.

At Newman Enterprises, Abby and Victoria read the press release and Victoria marvels that she didn’t know anything about this. When Victor arrives, Victoria asks, “You and Mom are back together?” Victor laughs, “She came to her senses, yes.” He leads her to believe he told Nikki what JT did. Victor relays that working with Nikki on the park was more important to him than building condos.

In the penthouse, Nick reads the press release and marvels to Chelsea that his parents bought Chancellor Park and it will stay as is. Nick wonders what the hell is going on. Nikki arrives and insists she’s happier with Victor than without him. Nick isn’t buying it. Eventually, Nikki concedes that she went back because Victor agreed to keep her out of prison. As she insists she enjoys being back at the ranch, Nick gets déjà vu. Nikki reveals she bought the park using every penny she stole from Victor, and crows, “You should have seen the look on his face when I told him.” Later, Nick complains to Chelsea it’s just a matter of time before his father hurts his mom again. Chelsea distracts him with Santa-themed lingerie.

At Sharon’s place, she and Scott discuss Nikki and Victor working together to buy the park. Scott’s puzzled, but Sharon advises him not to try and figure Victor out. She notes Nick will be happy. Mariah appears in a snowman costume for the show. Sharon and Scott crack up. Mariah’s set to phone Hilary and quit, but Sharon talks her out of it. Scott remarks he once did obituaries, which Sharon didn’t know. Mariah says there’s a lot she doesn’t know about him. Later, Scott tells Mariah he’d offer her a job if she left GC Buzz. Mariah thinks he’s buying her silence. He’s about to protest when Sharon appears. Scott blurts they were discussing gifts. Mariah expects there’ll be plenty under the tree.

At the Club, Paul lets JT know he feels suspicious about Nikki and Victor, and adds he really thought they were going to nail him this time. Later, Abby leaves Victor a voicemail from the bar. Mariah approaches and puts her on notice about Scott, noting her history of being the other woman. Abby warns they’ll become enemies if she keeps it up. JT appears and Mariah explains she’s Cassie’s twin, warns Abby again, and goes. JT orders drinks. Sharon and Scott arrive, and Sharon enthuses over JT’s family photos before telling JT about Abby and Scott getting trapped together during the sex ring investigation. After, JT says, “Who’d have thought those two would get together?” Abby replies, “Not me!” At their table, Scott is distracted by Abby and JT, who continue catching up at the bar. JT suggests they check out some old haunts together. Abby wonders if he’s asking her out and becomes belligerent even as he insists he just wants to hang out. Abby reminds him he’s a married man – she’s not interested! On her way out, she tells Victoria her ex made a pass at her. She checks in with JT, who is leaving tomorrow, and asks if he’s returning to Mac and the kids. JT admits they’ve separated; things went downhill in Poland and Mac took the kids back to DC. He took the position in Genoa City is because he lost his full-time job. JT explains they grew apart; it kills him not being around his kids. Victoria invites him to spend Christmas with her and Reed.

Nikki meets with Victoria at Newman Enterprises, and learns Victor knew she was off the hook thanks to JT. Nikki curses. “That bastard!”

At home, Scott and Sharon debate whether Abby over-reacted to JT. Sharon thinks something else is bothering Abby.

Back at the ranch, Nikki confronts Victor about blackmailing her. He asks if she’ll move out. Later, Nikki is still angry, but not going anywhere. She realized one phone call from Victor to Christine could change everything. Vic says, “Wise decision.” Nikki counters she could tell Paul he brought Chloe to town and broke Adam out of prison. Victor toasts to them making a formidable couple.

Jack & Ashley Argue Over Jabot, As...

The Abbott Family Feud Peaks With...