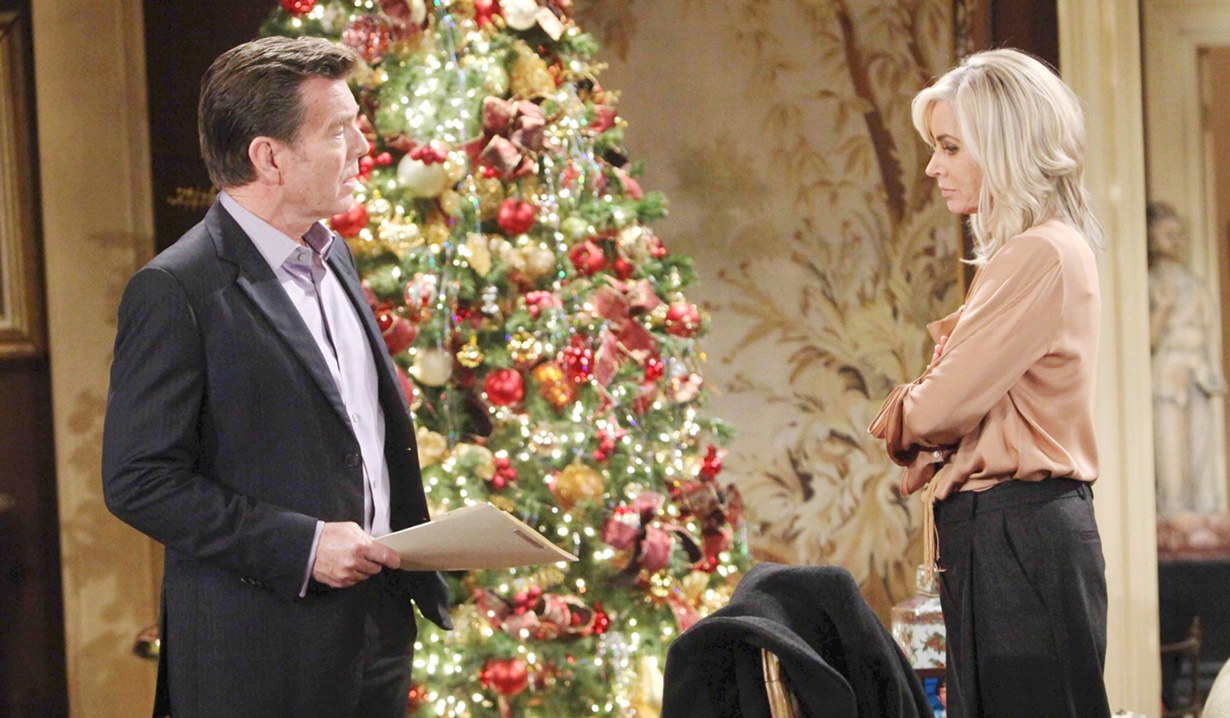 At home, Billy’s decorating for his first Christmas with Phyllis, who wants to debate the Jabot vote. Billy thinks she threw Jack a bone out of guilt. She thinks he has lingering jealousy. Billy decides he won’t allow anything outside that door to come in and mess with what they have. Phyllis agrees.

At the Abbott house, Jack tries unsuccessfully to reach Kyle. Ashley wants him to let it go, but Jack shouts that isn’t going to happen – as far as he’s concerned it’s business as usual. They argue until Jack storms out leaving Ash in charge of Dina. Billy stops in and Ashley reiterates her reasons for ousting Jack. Billy feels she’s questioning herself after the fact. Ash worries it looks like she’s punishing Jack for taking care of Dina while she refuses to, and worries she doesn’t have Abbott genes. Billy reassures her; he thinks Jack is having a hard time hearing the truth. He urges her to convince the board she should be in charge.

Devon thanks Sharon for letting him set up the toy drive at Crimson Lights. Hilary arrives with contributions and has posted the drive on GC Buzz’s website. Sharon cracks about Hil needing positive publicity and Hilary wonders why she’s questioning her goodwill. Sharon hopes her giving mood is contagious. Devon appreciates Hilary’s efforts, and admires her positive energy. They reflect on the cause being meaningful to Devon because of how he grew up. Hilary plans to drop something off for Sam, and Sharon and Devon note her talk of cute little fingernails. Devon and Hilary nearly kiss under the mistletoe, but she awkwardly leaves. Sharon, watching, smiles. Later, donations have poured in via The Hilary Hour. Sharon teases Devon that he looks at Hilary like he’s hoping she’s what shows up under his tree. Devon offers a flustered denial.

More: Holiday pre-emptions for Y&R and all soaps

At the Chancellor mansion, Cane takes a call from Sam’s doctor. Hilary arrives and learns Sam will be home for the New Year. Cane opens Hilary’s baby gifts, including toy rings. Cane teases Sam won’t play with them for months, but he’ll tell him they came from their good friend Hilary. Talk turns to the Chancellor sale. Hilary compliments Cane, and hopes he can convince Jill it’s not the right time. The doorbell rings. Cane’s busy so Hilary answers – it’s Lily. Hilary updates her that Sam is due home for New Year’s, and Jill wants to sell Chancellor. Lily questions Hilary’s friendship with Cane and asks what game she’s playing. Hilary alludes to Lily’s jealousy and assures her she doesn’t want Cane. She urges Lily to admit she’s having second thoughts about divorce. Lily insists there’s no turning back for either of them. Hil’s irked that Lily leaves without talking to Cane. She apologizes to Cane for her part in causing problems between them. Cane agrees it didn’t help, but he messed up his marriage. He thinks maybe it’s time to move on.

At the ranch, Nikki wonders how to tell Victoria she’s back there, and notes Victor’s enjoying this. He needles her about the embezzled funds, and says everything will be fine when she accepts the ‘new normal’. Nikki remarks on him having her things taken to the guestroom. Vic mocks her for thinking he’d share a bedroom with her after all that’s happened and talks about repairing the damage to the Newman name. Nikki points out she has no choice but to go along, and apologizes for the position she put him in with Christine and Paul. Vic agrees to makes donations to her charities and to take solo vacations. Nikki will take full advantage being Mrs. Newman again. Victor chuckles. He thinks they’ve made a hell of a deal. Devon arrives and learns they’ve reunited. Once alone, Devon questions Nikki, who insists she’s content and it’s a mutually beneficial arrangement. Later, Victor asks Nikki why she stole the money. Nikki admits she used it – to buy a park.

Phyllis finds Jack at the Club bar. She acknowledges he runs on emotion and ego, but still believes he should be running Jabot. Phyllis calls Ashley ‘petty’. He’s glad she’s on the board and in his corner. Talk turns to Kyle’s vote. Jack shrugs; his son won’t take his calls. Jack mulls over his failings and thinks maybe Ashley’s right. He adds Dina said he was a disappointment to John. Phyllis says Jack knows that’s not true, and urges him not to give up on being CEO of Jabot.

At the Abbott house, Jack wants Ashley to tell the board he should be reinstated, but she’s putting herself forward as the permanent CEO.

JT Reveals Split with Mac, and...