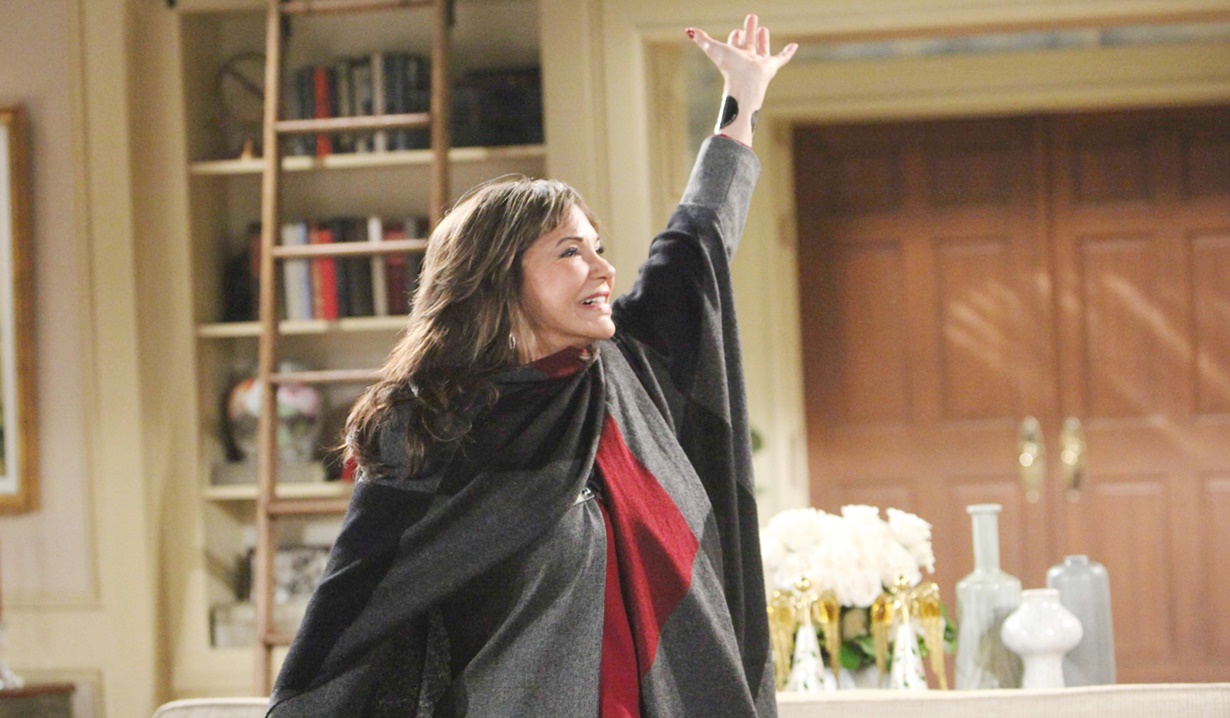 At Newman, Abby asks Victoria about JT being in town as Victor appears grumbling about who the hell has been accessing his personal account. Scott’s called in for an assignment and Victoria suggests Abby team with him. Once alone, Victoria dismisses Victor’s guess that it’s Nicholas embezzling from him and looks miserable as he mutters about finding the guilty party. At Crimson Lights, Nikki warns Kevin her theft could come to light, which means his role in it will also be revealed. They flash to Nikki paying Kevin to move Victor’s money to an offshore account for her. Nikki tells Kevin someone’s looking out for her, but it’s not looking good.

In the police station, Paul and Chris seek an update from JT. Chris questions if JT feels too close due to Victoria, but Paul thinks he’s the right man for the job.

At the Chancellor mansion, Jill enthuses about being home for the holidays. Billy drags Jill’s bags in, and Esther says the neighbors are complaining about the helicopter. After, Jill teases Billy about buying a racehorse for Phyllis, and notes she’s no longer going to play matchmaker. Jill worries about his seeming lack of drive and counsels he has to look inside himself for fulfillment. Billy reveals he’s been spending time with Dina, whose situation makes him feel you should enjoy life while you can.

Traci talks to Ashley and Jack about her trip home for Christmas. Jack is distracted by a ‘fawning puff piece’ about Chancellor being the one to watch for 2018. He swans off to take care of something Dina-related, and the sisters agree he needs to slow down. Later, Jack hosts Cane to offer a business proposal, but Cane turns him down – just as Jack did when Cane went to him for help.

Cane joins Jill and Billy at the Chancellor estate and shows off photos of Sam. Jill can’t wait to meet the baby. She then states she hates to be a Grinch, but she thinks it’s time to sell Chancellor Industries. Jill goes on about spending the rest of her days helping people in need with the profits. Cane and Billy are stunned.

In Chancellor Park, Kevin tells Nikki he’s tried to cover their tracks, but there’s only so much he can do. She gets a text from Victoria and suggests Kevin and Bella should pack their bags. Later, Abby tells Scott she’s suspicious about Victoria sticking them together. Abby’s keen to get results on their assignment without them having to spend time together.

At Top of the Tower, Traci and Ashley discuss Jack taking on too much. At the Abbott abode, Billy fills Jack in on Chancellor going up for sale. Jack notes they were once a subsidiary of Jabot. He leaves Billy with Dina so he can take immediate action. Traci and Ashley arrive and are concerned about Jack’s latest move. Ash decides to call the board together to stop him.

Victoria and Nikki meet with JT at the Club. He’s dismayed they’ve sought him out in public. Nikki wishes she’d used different methods to deal with Victor. She talks about being a silent partner when he was abusive toward people until finally he turned on her. Nikki will never act like Victor again. JT has to turn her in. He knows they’ll hate him, but no one will hate this more than him. Nikki phones Kevin to warn him to leave town. Later, Scott and Abby bicker at the bar. She announces she’s dating and storms off.

Back home, Jill enthuses about ‘feisty’ baby, Sam. Cane’s confused about her selling Chancellor, and him, to the highest bidder. Cane suggests she let him run the company instead and makes a heartfelt pitch. Jill will consider it before she makes a final decision. Later, Jack arrives. He and Jill discuss Dina, Jabot, and Jill’s heart condition before Jack asks her to sell him Chancellor. Jill thinks it’s a deal Katherine would approve of, but Jack says he came for Jill’s approval. They laugh at him leaving his offer on one of Esther’s Santa Claus napkins.

At the station, JT informs Paul and Chris his report has a few surprises.

At Newman, Victoria tells Victor it was Nikki who embezzled his money. Victor sighs. He won’t do anything, but wants to know the details. Christine calls and informs Victor he’s been cleared as JT found out it was simply a banking error. Victor will tell Nikki she’s not facing charges. Later, JT arrives and Victoria tells him she’s grateful for his change-of-heart. He felt the punishment wouldn’t have fit the crime. Victor appears. He thanks JT, and they agree to put the past behind them. He asks JT not to let Nikki know she’s cleared – he’ll convey that news himself.

Nikki sits down for a talk with Nick.

Mariah Threatens Scott After He...