Mariah Threatens Scott After He Leaves Crimson Lights With Abby 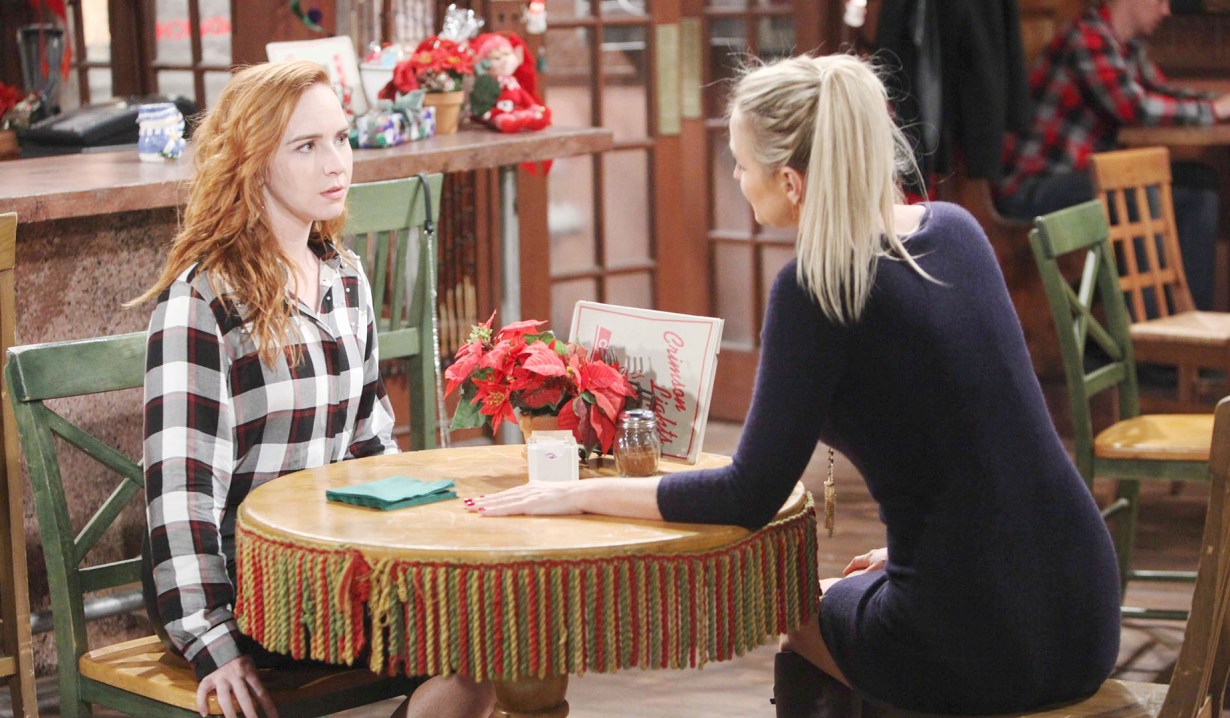 At Jabot, Phyllis avoids being pulled into the elevator by Billy. It turns out he’s there to complain about Cane – one shady move and he could run his mother’s company into the ground. At the Club, JT runs into Cane. JT learns Reed is dating Mattie, and confides his son is blowing him off. He wonders if Victoria has anything to do with it. Cane wouldn’t put anything past her. Talk turns to Cane’s marriage, he says Lily’s made it clear it’s over. He refers to Victoria firing him, but brushes off JT’s question about the reason. Cane thinks he can help JT connect with Reed.

Scott and Sharon canoodle behind the counter at Crimson Lights. Mariah enters and makes a remark about staying ‘loyal’ and faithful’ to one type of coffee while staring pointedly at Scott. On the patio, Reed tells Mattie he and his father only have a good relationship when they’re on different continents. Mattie takes a call from Cane inviting her and Reed to lunch. Mattie’s glad he’s willing to try, and accepts.

At the Club, JT thanks Cane. Soon, Mattie and a reluctant Reed appear. Reed calls JT out for tricking him. Cane takes the blame and announces they’ll be at separate tables. At their table, Reed explodes that JT never had time for him, especially after the baby came – he didn’t even ask if he wanted to move to Poland. JT insists he wants Reed to live with him, but doesn’t want to force it. JT grins that Reed reminds him of himself at the same age – playing guitar and sneaking around with Mattie. Nearby, Cane and Mattie discuss Mac carrying the twins. She suggests Cane think of Reed as JT and Mac’s son instead of Victoria’s. Cane might give that a try. After, JT asks Cane to take it easy on Reed.

At Newman Enterprises, Victoria tells Michael that Nikki’s behind the anomaly in Victor’s account. Abby arrives seeking an update on the audit, but Vikki sends her off with an assignment, telling her to knock next time. Michael informs Victoria he can’t guarantee Victor won’t find out what Nikki did, and grimaces that it looks bad. They discuss JT’s involvement. Michael remembers that Nikki and Victor are still married and can’t be forced to testify against one another, but Vikki worries they’d savor the chance to put one other behind bars.

Abby arrives at Crimson Lights, where Mariah blurts, “Look who it is! Ho, ho, ho.” They have an awkward conversation until Abby extricates herself and confronts Scott on the patio. He warns Sharon’s inside, and they leave to talk as Mariah watches glumly. Mariah suggests to Sharon that Scott’s trying too hard, but Sharon thinks she’s jealous of her happiness.

Victoria arrives home to Billy playing video games on her sofa. He reveals he’s stressed out about Cane’s article. Vikki has other problems and talks about the audit. Billy suggests she get JT to drop the audit any way she can. Vikki asks, “You want me to seduce my ex-husband?” Billy doesn’t want that for Mac, but still suggests, “Do what you have to do.”

At the Club, Phyllis meets up with Billy, and they spot Cane and JT. Phyllis asks after Sam, and Cane wonders if Billy saw his article. He cracks it was on the floor of the stable covered in horse manure. After Cane goes, Billy suggests JT back off on Victoria’s company. They snark, and Phyllis interjects that Billy saved Reed from a burning building. Later, Billy thinks JT was flirting with Phyllis, and notes he’s married to Mac, but sure wasn’t acting like it.

At the park, Abby informs Scott she won’t be the other woman. He insists he’s not asking her for anything – he moved in with Sharon and loves her. They start bickering. Scott didn’t mean to lead her on. Abby hisses at him to stay the hell away from her.

JT and Reed arrive at Victoria’s house. Reed complains that Cane pulled a fast one on him, then heads upstairs. Victoria asks JT to stay for a drink. Over wine, Vikki brings up the audit and wonders if he could show leniency to the ‘hypothetical’ guilty party. JT asks if she’s asking him to keep her out of prison. Vikki admits it’s Nikki, who was fighting with her dad and feels terribly guilty. JT sighs if her mom committed a crime, she’ll have to face the consequences.

Scott returns to Crimson Lights where Mariah confronts him – she knows about his make-out session with Abby. Scott swears it won’t happen again. Mariah won’t tell Sharon, but warns she’ll be watching him. She reminds him what she did to help Tessa and Mariah sneers, “Imagine how far I’ll go to protect my own mom.”

Victor decides to put his family ahead of everything else.