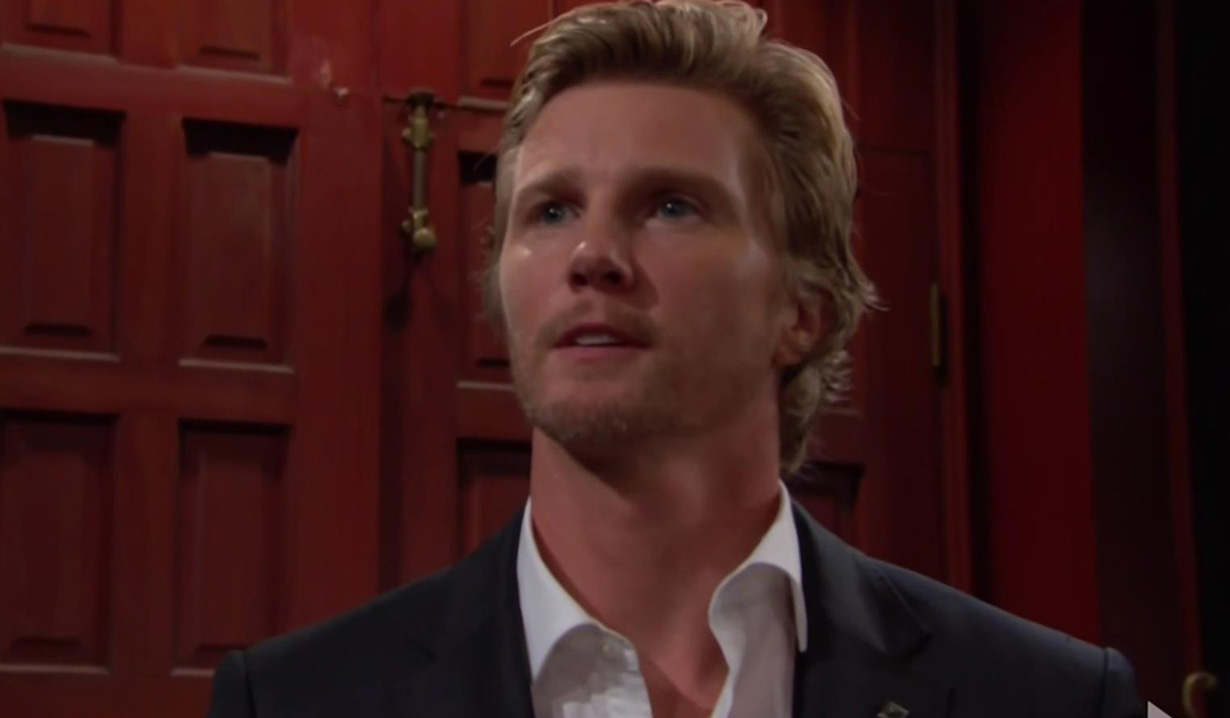 At the Club, Nick updates Victoria on Chancellor’s newest acquisition. She remarks that Newman used to get these headlines. Nick needles her about the condos. They discuss Cane. Victoria doesn’t consider him much of a threat or a competitor. Nick updates her that Devon threw his hat into the ring to buy Chancellor Park. Victoria’s unconcerned, and unsurprised that Nick convinced him to get involved. Once alone, Vikki’s joined by JT. He figures she’s curious as to why he’s in town and involved in the audit. She learns he took a forensic accounting course, and that Paul called him since he has insight into how Victor’s mind works. Victoria feels it’s a conflict of interest, but he explains someone high-up approved this. She can’t help but wonder if he’s jumping at the chance to make trouble for her dad. JT denies it; it’s just a temporary job and chance to see Reed. He suggests the three of them get together. Vikki asks about Victor’s account. JT admits there’s been sizable transfers to an offshore account.

At the Chancellor estate, Cane receives a gift basket with a congratulations card. He gets on the phone to thank Jill, then answers the door to Hilary, who wants to interview him.

In Crimson Lights, Abby meets Lily, who says there have been no changes on the Cane front. Abby wonders if she’ll follow through with the divorce. Lily thinks she has to, but Abby warns she must be certain. Lily changes the topic to Abby’s lovelife. Abby admits there’s this thing she can’t get out of her brain, and confesses she had sex with Scott. Lily chokes on her beverage. Abby explains the circumstances and marvels that he’s not even her type. Lily can’t help thinking this isn’t fair to Sharon. Abby reveals they’re living together, and observes that he can’t have it both ways. Inside, Billy’s put out when Phyllis has to go to work. He points out he has enough money for the both of them…she could quit, today. Phyllis laughs as Billy dangles trips together as incentive, but she likes working for Lauren. Billy has dibs on her after work. Later, Cane arrives with Hilary, raving about her interview techniques. She feels her viewers will love it. Cane leaves for something important to do. Lily appears and Hilary fills her in on her segment with Cane, and urges her to tell him what she thinks of his accomplishments.

In Chancellor Park, Nick and Billy cross paths. They snark, but Billy admires Nick’s crusade to save the park. Later, Victoria runs into Cane and makes nice. She wants to end the animosity, but he warns people who kicked him when he was down should watch out now that he’s back on top.

At the Club, Phyllis gets texts from Billy, at the bar, about how hot she is and what he wants to do to her on the table, while she conducts a meeting with a buyer. After, she confronts him. She gets called away by Lauren, but leaves him with a secret thought. He orders a pitcher of ice water.

Lily stops at the Chancellor mansion to congratulate Cane, who excuses himself for a moment and rejoins an attractive woman in the living room. He explains later that it’s a nanny for Sam, who should be home soon, then answers the phone. Lily is proud of him, but goes when the phone keeps ringing. Outside, she’s reflective.

At home, Billy will hit the shower, then they’ll hit the town. When he emerges, Phyllis is asleep. He kisses her.

In Crimson Lights, Hilary tells Nick she admires his effort against his father, then gets the news a bid has been accepted for the park….an anonymous bidder won. Nick feels this can’t be good.

At Victoria’s house, she tells JT that Reed should be there any minute; they can order takeout. JT says it means a lot. They chat about Mac, DJ, and the baby, Becca. He says everyone misses Reed. Vikki assures him Reed’s happy, but JT wonders why he hasn’t shown up. Vikki leaves Reed a message and can’t understand why he’d ‘ice’ JT out. Billy arrives with gifts for the kids and is surprised to see JT.

Alone at the Club, Lily calls Cane to join her, but he’s too busy.

Faith tattles on Scott and Abby.